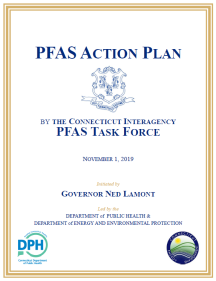 Over 400 public comments were received during the public comment period following the release of the Draft PFAS Action Plan. After review and careful consideration of each comment, the draft plan was revised, where appropriate, to reflect public input.

Following submittal of the Final PFAS Action Plan to Governor Lamont, implementation of the recommended initiatives outlined in the plan has transitioned to Department of Energy and Environmental Protection (DEEP), Department of Public Health (DPH), and other state agencies. 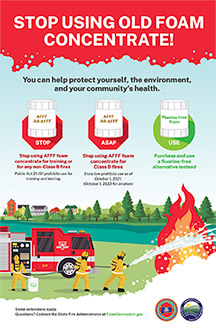 Public Act 21-191,  An Act Concerning the Use of Perfluoroalkyl or Polyfluoroalkyl Substances in Class B Firefghting Foam:

Extensions for Class B PFAS Firefighting Foam Use are available.

DEEP and the Department of Emergency Services and Public Protection (DESPP) are implementing the take-back and safe disposal of aqueous film-forming foam (AFFF) containing PFAS from state and municipal fire departments.

In addition, DEEP is developing a Geographic Information System (GIS) project specific to potential PFAS sources for use as a tool to evaluate the vulnerability of sensitive receptors, including drinking water supplies and surface water bodies, to PFAS pollution.  This GIS project will assist DEEP and DPH in prioritizing future site investigations throughout the state.

Furthermore, DEEP is planning initial testing at about one third of the state’s wastewater treatment plants.  This testing will include analysis of influent to and effluent from the treatment facilities.

For more information on steps being taken by DEEP and DPH, please contact:

The Interagency PFAS Task Force was established by Governor Ned Lamont on July 8, 2019 to protect Connecticut residents and the environment from the harmful effects of PFAS.  This Task Force, which was led by the DPH and DEEP and included representatives from a broad variety of state agencies, was tasked with delivering a PFAS Action Plan to Governor Lamont containing a comprehensive strategy to:

To address these three focus areas, the Task Force established Committees on:
These committees welcomed participation from all interested stakeholders.

Agencies and Entities in the Interagency PFAS Task Force