DEEP Reminds Beach Visitors That Charles Island in Milford and Duck Island in Westbrook are Closed Completely to the Public Through September 9, 2022

(HARTFORD)- Connecticut’s Department of Energy and Environmental Protection (DEEP) is asking the public to help protect birds that nest in coastal areas by staying at least 50 yards away from places where large concentrations of birds are gathered and avoiding areas that are roped off or marked with signs designating nesting locations.

People visiting beaches are often unaware of the shorebirds that nest in the sands near where they are swimming, fishing, and recreating. As a result, nests can accidentally get destroyed or abandoned and tiny fledglings that blend into their surroundings can get trampled and killed – especially during the busy summer beach season.

“Shorebirds and wading birds need special protection throughout their April to September nesting season,”said Jenny Dickson, Director of the DEEP Wildlife Division. “We urge beach visitors to keep fireworks and kites, especially kites that make noise, away from beach areas. We are also asking people to keep their pets leashed at all times and to stay away from fenced areas and groups of birds. Please check local ordinances before bringing pets to beaches; dogs are prohibited at many municipal beaches during the summer season.”

The Connecticut Audubon Coastal Center in Milford (including their parking lot) will be closed from the afternoon on Thursday, June 30, until sunrise on Tuesday, July 5, 2022, to protect the nesting shorebirds on the sandbar from excessive human disturbance during the holiday weekend. There is no on-the-street parking available in the area.

Whether they are incubating eggs or in feeding areas, nesting birds (particularly piping plovers, least terns, American oystercatchers, herons, and egrets) are especially vulnerable to disturbance from people, kites, fireworks, free-roaming cats, and unleashed dogs. Once disturbed, these birds may abandon nesting areas, leaving eggs and hatchlings to die. In addition, beachcombers, sunbathers, and boaters can inadvertently trample piping plover and least tern eggs and the small chicks if they are not vigilant. To avoid this, DEEP has erected fencing and yellow warning signs along beaches where these birds build their shallow nests in the sand. Similarly, DEEP has cordoned off various offshore islands where herons and egrets congregate in nesting areas called rookeries.

This season, Connecticut has already lost one adult piping plover to an unleashed dog attack. In 2016, a nest was lost to trampling by individuals not respecting cordoned off areas. These unnecessary losses could have been avoided if people paid attention to the signs and rules. You can help save these threatened species. Share the protection tips listed below with friends and family and help us educate other beach visitors.

WHAT BEACH VISITORS SHOULD KNOW

Beach visitors need to be aware that while cordoned off areas delineate critical nesting sites, once plover and tern chicks hatch, they are mobile and can be anywhere on the beach, not only in the fenced areas. These tiny chicks are no bigger than a cotton ball colored to match beach sand; therefore, it is extremely important to be aware of your surroundings when visiting the beach.

Both piping plovers and least terns use only a shallow depression in the sand as a nest. The sand color of the eggs and young act as a camouflage protection from predators and makes them difficult to see on a sunny beach. When intruders approach, young piping plovers often stand motionless while the parent tries to attract attention by pretending to have a broken wing or flying around the intruder.

“If you see an adult bird acting as though it is injured or flying around you, carefully move away from the area at once, ideally toward wet sand along the water,” advised Dickson. “Continued disturbance may cause abandonment of the chicks. Historically, piping plovers and least terns have declined due to the loss of beach habitat to residential and recreational development.”

Herons and egrets also are state-listed species, nesting on islands in Long Island Sound. In an effort to ensure that the birds do not abandon these unique areas, DEEP has closed Charles Island in Milford and Duck Island in Westbrook to the public through the nesting season. The closing means there is no public access allowed including: walking on the water’s edge, docking of boats and kayaks, or dog walking on the island. These Natural Area Preserves have also received designation as Audubon Important Bird Areas in recognition of their importance for nesting wading birds.

HOW TO PROTECT NESTING SHOREBIRDS AND WADING BIRDS

It is illegal to hold wildlife for rehabilitation without state or federal permits. Shorebirds have a unique diet that people would find hard to duplicate, which may result in starvation of the young bird. Please report any violations affecting wildlife to the DEEP’s 24-hour, toll-free hot line: 1-800-842-HELP or 860-424-3333. 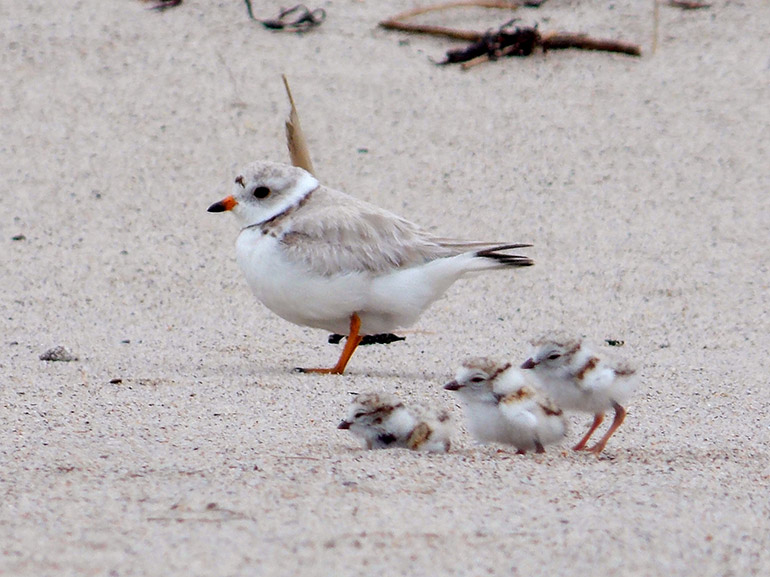 Fish, swim, and play from 50 yards away of beach nesting areas for piping plovers and other shorebirds.