HARTFORD, Conn.--The Connecticut Department of Public Health and the Department of Energy and Environmental Protection today are issuing a consumption advisory for fish caught in the Hockanum River. This consumption advisory is based on elevated levels of per- and polyfluorinated alkyl substances (PFAS) in fish tissue samples collected from the Hockanum River in Vernon.

Based on locations identified by DEEP, DPH recommends NOT eating fish from:

The Hockanum River and its tributaries are located in the towns of Vernon, Manchester, Ellington and East Hartford.

DPH is working closely with DEEP, which determined the locations where the fish advisory has been based on their fisheries expertise and knowledge of the case details. Surface water samples collected with fish tissue in Vernon below Shenipsit Lake met drinking water guidelines.

This advisory does not apply to Shenipsit Lake or affect the public drinking water supply.  The last drinking water sample collected by Connecticut Water Company showed no PFAS above laboratory limits.

The fish consumption advisory is based on fish tissue results recently received and validated. Fish samples were collected in September 2021 in Vernon, between Route 74 and Dart Hill Road.  In total, 30 fish representing three species—American Eel, Fallfish and White Sucker—were analyzed for PFAS concentrations. Tissue samples showed PFAS at concentrations above levels considered by DPH to be safe for human consumption. PFAS concentrations in White Sucker were somewhat lower than the other species tested.

This advisory is based on a limited sample size and is issued with an abundance of caution. The Hockanum River data were collected by a consultant retained by DEEP as part of a large, statewide study to evaluate the presence of PFAS in the state’s waste receiving waters. The study was initiated in response to the Governor’s Interagency PFAS Action Plan, which recommended evaluating PFAS levels in fish harvested from Connecticut waters. The study is ongoing, with final results expected by the end of 2022. DEEP plans to conduct additional monitoring along the Hockanum River to better understand the water quality conditions and potential sources of the PFAS.

DPH and DEEP would like to emphasize that while fish in the Hockanum River are not safe for consumption, recreational activities such as fishing (catch and release only) and boating are safe.

DEEP stocked the Hockanum River with 2,059 trout earlier this spring (March 4 and 23) before receiving the data showing elevated PFAS levels in river fish in the area. Anglers are strongly encouraged to either strictly practice catch and release fishing in the areas subject to this advisory, or to fish in other nearby waterbodies also stocked with trout. These locations can be viewed on the DEEP interactive trout stocking map www.ct.gov/deep/troutstockingmaps. No additional stocking of trout will occur in the Hockanum River or lower Tankerhoosen River this spring.

It is also important to note that there are other pre-existing statewide advisories that are in place including:

Long term exposure to PFAS may be associated with increased levels of cholesterol and liver enzymes, a change in immune response, an increased chance of high blood pressure and/or pre-eclampsia during pregnancy, and an increased chance of thyroid disease, developmental defects, and cancer, especially kidney and testicular cancers.

Additional information on DPH fish consumption advisories can be found at: https://portal.ct.gov/fish or by calling a DPH staff person at 1-877-458-FISH (3474). 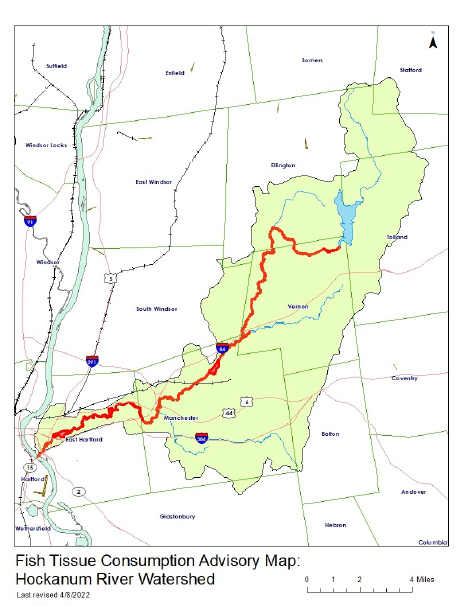