(HARTFORD)—During the fall season, black bearsincrease their food intake to add fat reserves needed to help them survive winter.  The quest for more food makes bears very active and the ConnecticutDepartment of Energy and Environmental Protection (DEEP) is remindingresidents of several best practices to reduce the likelihood of an encounter with a bear.

During fall, bears forage for calorie-packed nuts and seeds for up to 20 hours a day in a race against the clock. This annual power-eating marathon is called hyperphagia. During hyperphagia, bears need to eat 10 times the calories they normally consume – that’s at least 20,000 calories a day. Their goal: put on as much weight and insulating fat as possible before turning in for the winter. Even bears that live in warmer climates to our south and den later, or sometimes not at all, still go into hyperphagia in the fall.

A pound of acorns has about 2,100 calories; a pound of blueberries, just 256 calories. It takes many hours of foraging each day for bears to find 20,000 calories’ worth of nuts and berries. But just one bird feeder full of black oil sunflower seed or one garbage container overflowing with leftovers can reward a bear with a day’s worth of calories for less than an hour’s work. It’s no wonder human-provided foods can be even more tempting as winter closes in.

Black bears that consume human-associated food (e.g., birdseed, trash, pet food) on a regular basis become habituated (comfortable around people) and food-conditioned (associate humans with food). As the bear population continues to grow and expand its range in Connecticut, and bears become increasingly food conditioned, conflicts with humans will continue to increase, and food-conditioned bears pose a greater risk to public safety and often cause more property damage to houses, cars, pets, and livestock.

“Black bears should never be fed – either intentionally or unintentionally,” said Jenny Dickson, DEEP Wildlife Division Director. “Bears that are attracted to homes by easily-accessible foods lose their fear of humans. It is important to remember to keep outdoor grills clean and garbage secured and indoors until collection day to avoid giving bears a tempting snack. Bears that are rewarded by easy meals spend more time in neighborhoods and near people, increasing risks to public safety, the likelihood of property damage, and the possibility that the bears may be hit and killed by vehicles. It is up to all of us to help prevent bears from learning bad behavior.”

DEEP has several best practices for residents to incorporate to reduce the likelihood of an encounter with a bear, available online on DEEP’s “Living with Black Bears” website, https://portal.ct.gov/DEEP-Living-with-Black-Bears. DEEP has also created a video incorporating many of these best practices, available here.

Make Your Place a No-Bear-Food-Zone

If you encounter a bear while in your yard or hiking, make your presence known by yelling or making other loud noises. Never attempt to get closer to a bear. If a bear does not retreat, slowly leave the area. If in your yard, go into your house, garage, or other structure. If the bear persistently approaches, go on the offensive—shout, wave your arms, and throw sticks or rocks.If your dog is hiking with you, it is imperative that you keep the dog on a SHORT leash and DO NOT let it roam free – this is for the safety of your dog, yourself, and the bear.

In the rare instance when a bear appears to be aggressive toward people, residents should immediately contact DEEP’s 24-hour dispatch line at 860-424-3333.

Bear sightings reported by the public provide valuable information to assist the DEEP in monitoring changes in the black bear population. Anyone who observes a black bear in Connecticut is encouraged to report the sighting on DEEP’s website at https://portal.ct.gov/DEEP/Wildlife/Report-a-Wildlife-Sighting or call the Wildlife Division at 860-424-3011. Information on the presence or absence of ear tags, including tag color and numbers, is particularly valuable. A common misconception is that a tagged bear is a problem bear, and a bear with two ear tags was caught on two different occasions because it was causing problems. Actually, every bear receives two ear tags (one in each ear) the first time it is handled by DEEP biologists. Most tagged bears have not been caught as problem bears, but rather as part of a project researching the state’s population.

A portion of this press release was provided by BearWise®, a program created by bear biologists, and supported by State Wildlife Agencies. 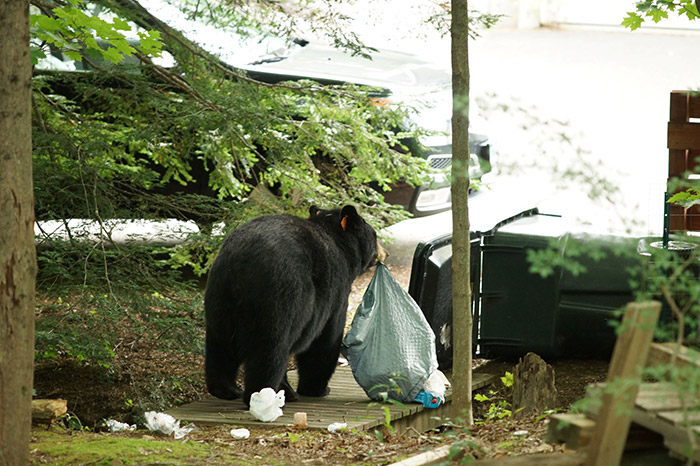