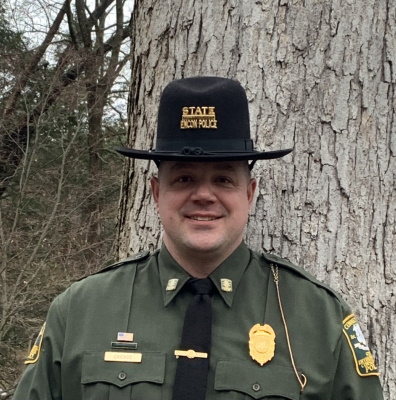 In his nomination letter, Off. Chickos is described as a “competent, well-respected, and valued member of the District by his fellow officers, other Agency divisions, as well as our hunting and fishing constituents. Officer Chickos is an excellent Division representative of community policing and truly supports the mission of the Environmental Conservation Police Division.”

Off. Chickos joined the Connecticut Environmental Police Division in July 2008 and has been assigned to the Marine and Western Districts. He is currently assigned to the Northwest sector where he has been since the summer of 2014.

In his time at DEEP, Off. Chickos has proven to be a valuable asset to the Division. He’s maintained a high level of public interaction, coordinated with other agency divisions, handled complex cases with little supervision, and provided guidance and mentoring to junior officers.

In addition to his routine patrol duties, Off. Chickos was a Field Training Officer and was assigned to field train two of the Protective Services Trainees hired in 2019. Off. Chickos was also an active member of the Hunter Related Shooting Investigation Unit, Chemical Immobilization Unit, and Crisis Intervention Team.

“Congratulations to Off. Chickos on receiving this well-deserved recognition of his dedicated service to the people, wildlife, and natural resources of our state,” DEEP Commissioner Katie Dykes said. “Off. Chickos truly embodies DEEP’s environmental conservation mission, bringing his passion and professionalism each day to his work. I’m grateful to him, and to our entire Environmental Conservation Police Division for the myriad ways they represent DEEP every day, and for the countless great works they perform seen and unseen.”

This marked Chickos’ first time nominated for the NEAFWA Officer of the Year Award. Chickos, who describes himself as “low-key,” said he was “honored,” “humbled,” and “shocked,” when he learned that he’d received the award.

“Doing the job day in and day out, you don’t do it for any recognition, but it is nice to know that it’s noticed,” he said.

Chickos, who studied Natural Resources Management in college, loves the outdoors, and always wanted to be a police officer, making his chosen profession a natural pairing of his interests. Chickos said the job for him is about “making a difference,” and being “a decent human being” in the situations he’s called to respond to, whether it’s “saving an animal that’s stuck, helping someone who’s injured, or consoling a family that’s just lost a loved one.”

Off. Chickos was nominated by his supervisors, Sgt. Bill Logodice, and Capt. Cynthia Schneider, and the nomination was voted on by his fellow officers.

“Off. Chickos does a lot with training our new officers, does a lot of community relations with all of the user groups that we have, and he’s very big on outreach,” Sgt. Logodice said. “He has a ton of public trust built up in the Northwest sector, and because of that, he works cooperatively with landowners in the area, such as farmers dealing with hunting issues on their property. I thought that was a very important thing to highlight.”

Schneider, who has known Chickos for his entire career as an EnCon Officer, serving on his hiring panel back in 2008, and as his training sergeant, said she was thrilled for him.

“I’m very happy and proud John was recognized by his peers and received the award,” she said. “He truly cares about wildlife conservation and the protection of natural resources. He’s an excellent representative of the Environmental Conservation Police Division.”

Off. Chickos’ nomination letter further stated that his caseload has demonstrated his knowledge in the various aspects of conservation law enforcement and criminal investigations. He completes thorough investigations and maintains a consistent public presence demonstrative of his community policing approach. He regularly interacts with sportsmen groups in the area and assists with youth hunting day events. He strives to engage today’s youth in outdoor and environmental activities and educates sportsmen which fosters a positive view on conservation efforts and Conservation Enforcement Officers.

Off. Chickos responded as the primary officer to 33 nuisance black bear complaints and assisted fellow officers on numerous others. Off. Chickos’ knowledge and experience in dealing with bears led to the vast majority of these situations being resolved by public education and aversive conditioning of the bears. In the instances where bears needed to be euthanized, Off. Chickos was able to articulate the need for such action due to public safety concerns.

Some of the more notable cases reflecting Off. Chickos’ enforcement activity in 2020 include:

NEAFWA is a quasi-governmental organization consisting of thirteen states in the northeast region plus the District of Columbia, and the provinces in the eastern region of Canada. The association’s objectives include encouraging and promoting better understanding and cooperation among its members in dealing with the conservation of fish and wildlife resources; providing for the interchange of information among its members and with other government and non-governmental organizations dealing with the conservation of fish and wildlife resources, assisting in the coordination and implementation of fish and wildlife programs of mutual interest to its members; promoting a high level of fish and wildlife administration throughout the northeast region; providing the basis for regional action on existing or proposed federal legislation, regulations and resultant program; and encouraging and providing for regional projects that conserve wildlife, fish, and their habitats.