DEEP Advises Motorists to Watch for Deer and Moose this Spring

Be Watchful of Increased Deer and Moose Activity Along Roadways, Especially During Early Morning and Evening Hours

(Hartford)-Connecticut’s Department of Energy and Environmental Protection (DEEP) advises motorists to be watchful of increased deer and moose activity along roadways, especially during early morning and evening hours.

May and June mark the birthing period for deer and moose. Although Connecticut's moose population mainly resides in the northwestern part of the state, they can be seen in eastern Connecticut. There are two times of year in which moose become highly active, during spring when last year’s offspring disperse from the female seeking out their own habitat and during the breeding season (also known as "the rut"), running from mid-October for moose through mid-December for deer.

DEEP’s Wildlife Division urges motorists to be aware during these seasonal periods of activity and also slow down and drive defensively should a large animal, such as a deer, moose, or even a black bear, be spotted on or by the road. Because moose are darker in color and stand much higher than deer, observing reflective eye-shine from headlights is infrequent and, when struck, moose often end up impacting the windshield of vehicles. When checking the road for moose at night, look higher than you normally would for deer and reduce the speed of your vehicle. All moose, deer, and bear collisions with vehicles should be reported to local, state, or DEEP Environmental Conservation Police Officers. DEEP’s 24-hour Dispatch Center can be reached at 860-424-3333.

“Over 40 moose-vehicle accidents have been reported in Connecticut between 1995 and 2021, with an average of two per year since 2002,” continued LaBonte.

Most of Connecticut is not considered ideal habitat for moose because the state’s landscape is fragmented, roadways have high traffic volume, and moose have large home ranges (approximately 10-15 square miles). Moose venturing into southern Connecticut, with high population density, road networks, and traffic volumes, pose an increased potential for human fatalities from accidents as compared to deer-vehicle accidents. Residents throughout the state are encouraged to report moose sightings on the DEEP website at https://portal.ct.gov/DEEP/Wildlife/Report-a-Wildlife-Sighting. 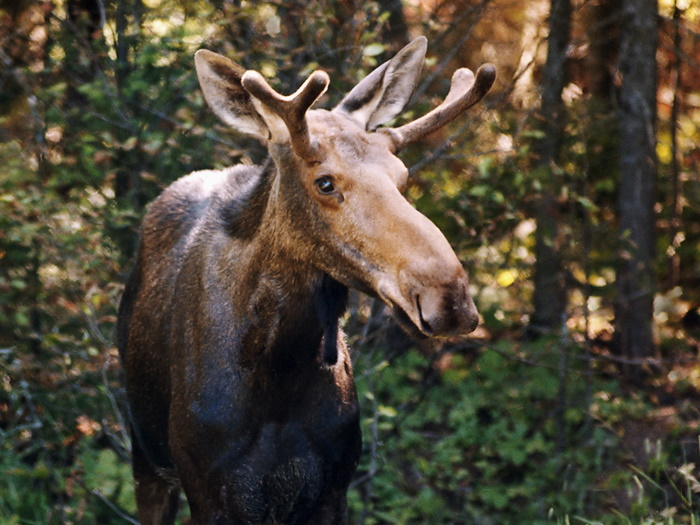 Connecticut’s Department of Energy and Environmental Protection Wildlife Division reminds motorists to be watchful of increased deer and moose activity along roadways, especially during early morning and evening hours.