This 13-inch, 1-year old northern pike has fewer light spots than the adult.

Distribution. Northern pike have a circumpolar distribution and are found throughout the northern latitudes of the world. In North America, pike are found in most of Alaska and Canada, south into the Northern United States. A self-sustaining population has been present for more than 100 years in the Connecticut River. Pike have more recently been introduced into a number of Connecticut lakes and are occasionally found in other water bodies into which they have migrated or where anglers have illegally transported them. 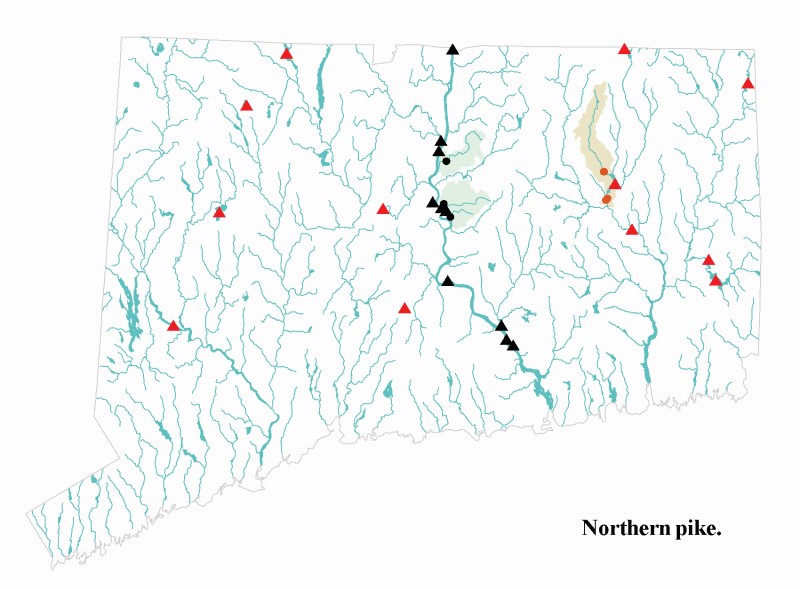 Habits. Prefer quiet, vegetated areas of larger lakes and streams. Pike (like pickerel) are considered a “coolwater” fish and feed actively throughout the winter. They almost exclusively eat fish and most often feed by lying still near vegetation, ambushing hapless prey with a lightning burst of speed. Pike spawn in the early spring around flooded vegetation. Very specific spawning requirements limit their ability to reproduce in most Connecticut lakes and ponds. Pike can be caught on a variety of lures or by using live fish as bait.

A 4.5-inch juvenile northern pike that has not yet developed the light spots on its sides.

Comments. Northern pike are important game and predatory fish. Although pike are good-tasting, most anglers release them because they are “bony.” The northern pike is Connecticut’s largest strictly freshwater gamefish. Most pike populations in lakes are not self-sustaining and, therefore, require annual stockings of 4- to 5-inch fingerlings to support fisheries. Pike will occasionally hybridize in nature with chain pickerel. Characteristics of hybrids are intermediate between the two species.