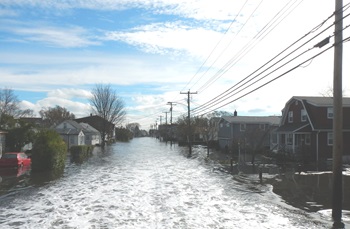 Of the more than 3.5 million people living in Connecticut, over 61% resides in the states coastal area, and nearly 30% of the state's population works within the coastal area.1  Thus, understanding the potential for sea level rise and the subsequent effects Connecticut can expect as a consequence of the rise in average global temperatures is critical. In September 2019 the Intergovernmental Panel on Climate Change published a special report, which identified that New England's geography makes it acutely susceptible to sea level rise (SLR) and coastal flooding. Any substantial rise in sea level would discernibly cause immense impacts to Connecticut's dynamic coast. Therefore, planning for the effects of sea level rise in Connecticut is imperative. 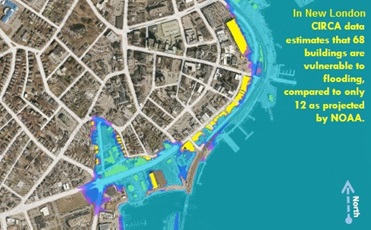 The mission of the Connecticut Institute for Resilience & Climate Adaptation (CIRCA) at the University of Connecticut (UConn) is to advance resilience and sustainability along Connecticut's coast and inland waterways to be able to contend with the increasing impacts of climate change and sea level rise. A primary objective of CIRCA is to improve scientific understanding of earth's changing climate and its local and regional impacts in Connecticut. CIRCA's Sea Level Rise website provides a plethora of information on the factors that contribute to sea level rise and features visualization tools that depict potential sea level rise for Connecticut. The website also highlights CIRCA's planning projects, which are working to expand coastal resilience across the state. CIRCA's SLR website is just one element of their strategy to create a climate‐literate public that understands Connecticut's vulnerabilities to a changing climate, and which utilizes that knowledge to make scientifically informed, environmentally sound decisions.

From O’Donnell, J. (2018). Sea Level Rise in Connecticut.
UConn Department of Marine Sciences and CIRCA.

Connecticut General Statutes (CGS) Section 25-68o(b) requires the Department of Energy and Environmental Protection (DEEP) to publish the sea level change scenario for the state published by the University of Connecticut Marine Sciences Division based upon the sea level change scenarios published by the National Oceanic and Atmospheric Administration in Technical Report OAR CPO-1 and other necessary available scientific data.

The adopted sea level change scenario for Connecticut is 0.5 m (1 foot 8 inches) higher than the national tidal datum in Long Island Sound by 2050.

This sea level change scenario is meant to guide municipalities and the state in preparing the following planning documents:

To better understand how Connecticut’s roads and largest coastal area marshes may respond to more frequent coastal flooding resulting from sea level rise, the Sea Level Affecting Marshes Model (SLAMM) was applied to Connecticut’s shoreline. The results of the model indicate that some coastal area roads that currently flood only a few times a year will flood more regularly, in some cases as much as at least once a month, by mid-century under SLR rates approximating the State-adopted sea level change scenario of 0.5 m (1 foot 8 inches) by 2050. To learn more about SLAMM and the model’s results, visit the Sea Level Rise Effects on Roads & Marshes web pages on Connecticut Environmental Conditions Online (CT ECO).