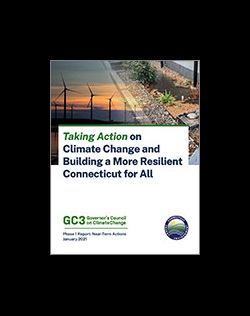 On September 3, 2019, Governor Ned Lamont issued Executive Order No. 3, re-establishing and expanding the membership and responsibilities of the Governor’s Council on Climate Change, also known as the GC3. The GC3 was originally established in 2015 by Governor Dan Malloy.  In addition to continuing to address mitigation strategies to reduce greenhouse gases, the newly expanded GC3 will also consider adaptation and resilience in the face of climate change impacts. 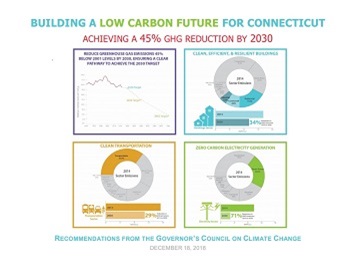 1. Monitor and report on the state’s implementation of the greenhouse gas emissions reduction strategies set forth in the inaugural GC3’s December 2018 report Building a Low Carbon Future for Connecticut: Achieving a 45% GHG Reduction by 2030. This includes tasks such as:

2. Develop and implement adaptation strategies to assess and prepare for the impacts of climate change in areas such as infrastructure, agriculture, natural resources, and public health. This includes tasks such as:

Meetings of the GC3, its subcommittees, and working groups continue to be noticed and are open to the public:

Upcoming and past webinars

History of the GC3

The GC3, originally established in 2015 by Governor Dannel P. Malloy’s Executive Order No. 46, was formally tasked with examining the effectiveness of existing policies and regulations designed to reduce greenhouse gas emissions and identify new strategies to meet the state’s greenhouse gas emissions reduction target of 80% below 2001 levels by 2050. The Council was also tasked with developing a mid-term greenhouse gas reduction and to identify strategies to achieve the chosen target.  The Council submitted its recommendations on December 18, 2018 when it released the report Building a Low Carbon Future for Connecticut: Achieving a 45% GHG Reduction by 2030. All previous meetings are archived below.

Contact the GC3 or submit comments via email to DEEP.climatechange@ct.gov

Sign up for the Climate Solutions Newsletter to receive climate change and GC3 news, information, and updates.