Stage I Annual Testing - Frequently Asked Questions Published May 21, 2020
Gasoline vapors that escape during the transfer of gasoline to underground storage tanks and the refueling of motor vehicles pose a risk to public health and the environment. In order to protect public health and the environment, three different types of vapor control systems have been or are being used to minimize vapor emissions during the transfer of gasoline at Gasoline Dispensing Facilities (GDF). The three types of systems are: Stage I, Stage II, and Onboard Refueling Vapor Recovery (ORVR). 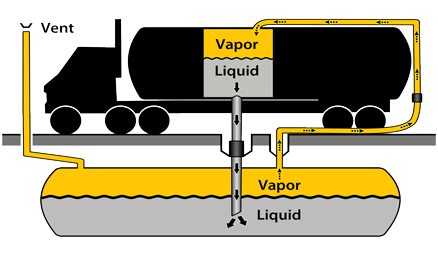 What is Stage I?

Stage I Vapor Control is the control of gasoline vapor emissions that occurs when gasoline is delivered in bulk from tanker trucks to the underground storage tanks located at GDFs. Stage I Vapor Recovery is the system used to capture the vapors displaced from the underground storage tanks during these deliveries. The captured vapors are piped back into the empty space within the tanker truck so they can be returned to the terminal for processing.

Fact Sheet: What do I need to know about the Stage I Vapor Recovery regulation?

Applicability is now based on a GDF's monthly gasoline throughput, which is calculated by adding the quantity of gasoline dispensed in any consecutive 365 day period and dividing by 12.

For GDFs with a monthly throughput of 100,000 gallons or more per month:

Conduct pressure decay, vapor space tie-in, and P/V vent valve tests at least once per calendar year in accordance with the following:

Please Note - Stage I requirements do not address any requirements you may have or be subject to for the DEEP Underground Storage Tank (UST) Program. If you have any questions relating to those requirements, please contact the UST Program at (860) 424-3374. 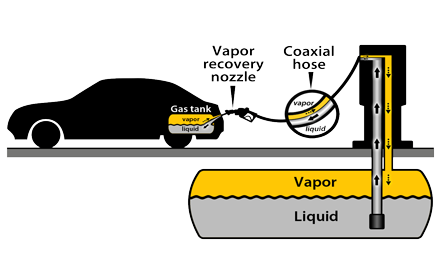 What is Stage II?

Stage II Vapor Control is the control of gasoline vapor emissions that occurs when vehicles are being fueled at GDFs. Stage II Vapor Recovery is the system used to capture the gasoline vapors at the vehicle fill pipe. The captured vapors are returned to the empty space in the underground storage tank at the GDF. The vapors stored in the underground storage tanks will later be transferred to the terminal for processing during the next bulk delivery via the Stage I Vapor Recovery system.

Federal regulations have required the installation of ORVR systems in all vehicles since 1998. In the early 2000's, EPA determined that Stage II and ORVR systems were incompatible with each other and actually caused an increase in emissions. In order to evaluate the effectiveness Connecticut's GDF Vapor Control Program, DEEP commissioned an Analysis of Future Options for Connecticut's Gasoline Dispensing Facility Vapor Control Program .

As a result of the analysis and to resolve the incompatibility of Stage II and ORVR systems, Public Act No. 13-120: An Act Concerning Gasoline Vapor Recovery Systems (Fact Sheet) was adopted on June 18, 2013, which required GDFs in Connecticut to decommission all Stage II vapor recovery systems.

On June 18, 2013, Public Act No. 13-120 (Fact Sheet) was signed into law and immediately became effective. This Act repealed the previous version of Connecticut General Statute Section 22a-174e, which required DEEP to adopt regulations pertaining to the installation and testing of Stage II vapor recovery systems and replaced it with language that mandates the decommissioning of all Stage II systems by July 1, 2015.

Any GDF with a Stage II system currently in place is in violation of Public Act No. 13-120. The owner/operator of the GDF must notify DEEP and decommission their Stage II equipment immediately.

In order to complete the decommissioning process, the forms listed below must be completed and submitted to air.vapor.program@ct.gov with the following in the subject line: 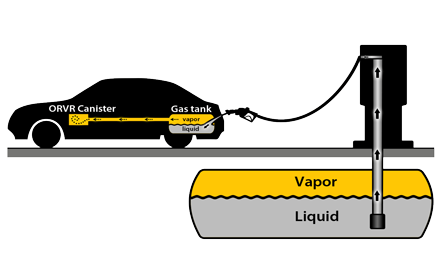 Onboard Refueling Vapor Recovery (ORVR) captures fuel vapors from the vehicle gas tank during refueling. In vehicles with ORVR, the gas tank and fill pipe are designed so that when refueling the vehicle, fuel vapors in the gas tank travel to an activated carbon packed canister, which adsorbs the vapor. When the engine is in operation, it draws the gasoline vapors into the engine intake manifold to be used as fuel.

Please contact Kathleen Rankin at kathleen.rankin@ct.gov or (860) 424-3473 if you have questions or need any additional information.