The range of the Asian tiger mosquito is expanding in the United States, particularly into Connecticut and other northeastern states. Infection rates of mosquito-borne diseases, such as Dengue and Zika, are likely to rise, over the long term, as a warming climate creates more favorable habitats for mosquitoes. Connecticut is expected to get warmer and wetter over the coming century, enhancing mosquito populations by creating more suitable habitat. Data suggests that precipitation during the summer months has a greater impact on the number of mosquitoes in the state than does winter temperature. Additional information about mosquito management in Connecticut can be found on Department of Energy and Environmental Protection’s (DEEP) website or portal.ct.gov/CAES.

Technical Note: Collection data for 2016-2018 has been modified from previous reports because of the introduction of new data from a trapping site in Bridgeport. 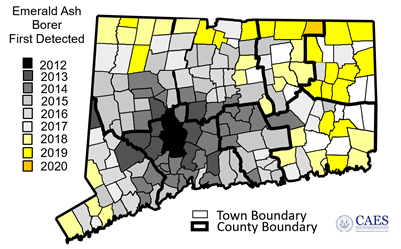 The emerald ash borer attacks ash trees almost exclusively. In Connecticut, ash trees make up just slightly less than three percent of the trees in the forest, most of which are white ash. The loss of ash

trees in a forest stand also reduces vital habitat and allows undesirable invasive plants to fill the gap created. Movement of ash, in particular as firewood, nursery stock, logs and wood packaging materials, has been cited as the most likely means by which emerald ash borer has spread so rapidly.56 Additional information about the emerald ash borer in Connecticut can be found on DEEP’s website or at www.emeraldashborer.info.

Technical Note: The “Invasive Disruptors” described in this section are species that are not native to Connecticut that have the potential to upset the ecological balance or threaten public health.  Invasive species have been identified as a cause in decline of at least 48 percent of species listed as threatened or endangered under the United States Endangered Species Act.