Bleeding necrosis, Botrysphaeria berengeriana (Dothiorella).
Profuse bleeding on branches and bark so that the areas appear shiny or oily. The exudate comes from numerous small cankers that can coalesce and girdle the branch or trunk. Young infections have a distinctive phenolic odor, and inner bark is usually discolored and brown under the surface of the canker.

Pruning infected material well back of any discoloration in the wood may prevent further spread. Fertilize trees in the spring and water during dry weather to maintain tree vigor. Avoid insect and mechanical injuries to reduce chances of infection.

American plum borer, Euzephera semifuneralis.
The larva of this moth is a secondary pest, injuring stressed trees by feeding on the inner bark and cambium. The winter is passed as a white cocoon located under loose bark. Cream colored moths with a 1" wingspan appear in May. They mate, and the female lays eggs singly or in groups in bark crevices. Eggs hatch in a matter of days and the young larvae, after finding an opening, enter the bark. They begin feeding, making frequent holes to push out the red frass. The larvae mature in 4 - 6 weeks and are about 1" long with a brown head capsule. Among the products registered for control of this pest in Connecticut is permethrin, which can be applied to the stems and trunks of affected trees in mid to late May to manage adults. The insect pathogenic nematode, Steinernema carpocapsae, can be applied to stems and trunks to control larvae in burrows. Consult the label for dosage rates and safety precautions.

Asiatic oak weevil, Cyrtepistomus castaneus. This 1/4" long, grayish-black weevil feeds between the veins of host plant foliage, usually at the bottom of the plant. Eggs are laid in the soil and larvae feed on roots. Adults emerge in early summer and are present for several months. Adults are attracted to light and may become nuisance pests in the home when populations are high. Among the products registered for control of this pest in Connecticut are permethrin and fenvalerate, which can be applied to foliage when adults are present in damaging numbers. Consult the label for dosage rates and safety precautions. 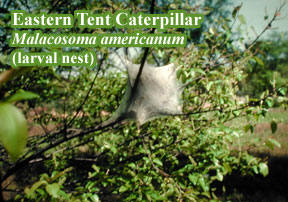 Eastern tent caterpillar, Malacosoma americanum
The damage of these caterpillars varies from almost none to complete defoliation of trees. In early spring, caterpillars hatch from the eggs that have overwintered. The hairy caterpillars build silken tents in which they hide except when they are feeding on leaves. By late June, the caterpillars mature, and soon the medium-sized moths are on the wing. Females lay eggs in masses attached to twigs. Eastern tent caterpillars have definite cycles of abundance, with a severe outbreaks every 7 or 8 years. Foliar sprays of carbaryl, azadirachtin, Bacillus thuringiensis var kurstaki, or spinosad, which are among the compounds registered for use against this pest in Connecticut, effectively control caterpillars. Carbaryl, however, should not be used before or during bloom because it is highly toxic to honey bees. Consult the labels for dosage rates and safety precautions.

Fall webworm, Hyphantria cunea
Webworms cause minor foliar damage on sweet gum. Caterpillars build a loosely constructed tent on the ends of infested branches. Tents, which usually are most abundant in the northeastern part of the state, are visible in late summer. Summer foliar sprays, such as acephate, carbaryl, insecticidal soap, Bacillus thuringiensis var. kurstaki, or spinosad, which are among the compounds registered for control of this pest in Connecticut, control this minor pest. Consult the labels for dosage rates and safety precautions. See pear for additional details of the life history.

Forest tent caterpillar, Malacosoma disstria. The larvae of this tan moth are capable of defoliating deciduous trees. They do not form a tent like the Eastern tent caterpillar but do form silken mats on the uppermost branches of host trees. They move out as a group when young to strip foliage from one branch at a time. With increasing size, they become solitary feeders. Winter is passed as a tubular egg mass encircling a host twig. Eggs hatch as leaves are unfolding. The mature caterpillar is dark gray with blue longitudinal stripes on either side of a line of cream colored-spots resembling high heel shoe prints. They form light yellow cocoons in folded leaves or on nearby plants. The moth, with a wing spread of almost 2", is nocturnal and attracted to light. There is one generation per year. Among the compounds registered for control of this pest in Connecticut are acephate, carbaryl, insecticidal soap and Bacillus thuringiensis var. kurstaki or spinosad. All can be applied to the foliage in early May to young larvae to achieve the best control. Two sprays ten days apart may be needed. Consult the label for dosage rates and safety precautions.

Walnut scale, Quadraspidiotus juglansregiae.
This circular light gray scale that is about 1/8" in diameter sometimes infests sweetgum. Its life history is similar to that of the San Jose scale. Among the compounds registered for control of this pest in Connecticut are horticultural oil and malathion. A dormant spray of ultrafine horticultural oil is effective. Spraying with malathion late in June and at intervals of 4 weeks until the end of September will be helpful in controlling crawlers. Consult the labels for dosage rates and safety precautions.