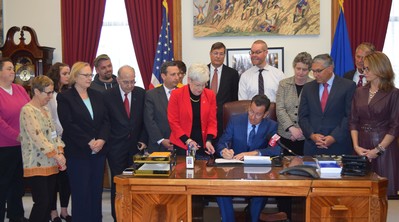 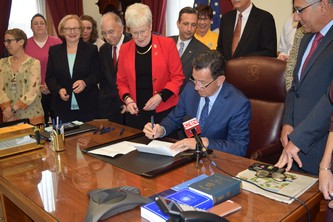 (HARTFORD, CT) – Governor Dannel P. Malloy this evening signed into law legislation that will protect LGBTQ youth in the state from the destructive and discredited practice of conversion therapy. The so-called treatment, which seeks to change a person’s sexual orientation or gender identity, has been discredited by nearly every credible medical and psychiatric group in the country and oftentimes includes destructive practices that are harmful to children, such as electric shock therapy.

The bill, which was approved in the House of Representatives last week by an overwhelming, bipartisan vote of 141-8, was adopted in the State Senate today by a unanimous vote of 36-0. The Senate then immediately transmitted the legislation to the Governor, who invited the bill’s proponents, legislative leaders, and other advocates into his office, where he signed the bill during a brief ceremony. The bill took effect immediately upon receiving the Governor’s signature.

“At a time when we see harassment increasing against anyone perceived as being different, at a time when we see the rights of our friends and neighbors being threatened by the national government, at a time when we see LGBTQ youth turning to suicide at record rates, to remain silent is to be complicit,” Governor Malloy said. “This legislation is about protecting children and teens who have been forced to undergo this so-called therapy, despite the fact that it is not supported by any medical evidence and its only proven results have been harmful, destructive, and lasting. I would like to thank the overwhelming majority of bipartisan lawmakers who voted to adopt this legislation – particularly Representative Jeff Currey and Senator Beth Bye for their unwavering dedication to enacting this law.”

“This legislation will protect LGBTQ young people from conversion therapy – a dangerous practice that has no place in our healthcare system,” Lt. Governor Nancy Wyman said. “The harmful impacts of conversion therapy are well-documented and face expansive opposition by national groups including the American Psychological Association and the American Psychiatric Association, as well as pediatric care providers. I applaud Governor Malloy for signing this legislation immediately, and commend the Senate on passing the bill.”

The legislation is House Bill 6695, An Act Concerning the Protection of Youth from Conversion Therapy.