GOV. MALLOY &amp; LT. GOV. WYMAN INVITE RESIDENTS TO ATTEND STATE'S ANNUAL 9/11 MEMORIAL CEREMONY
(HARTFORD, CT) - Governor Dannel P. Malloy and Lt. Governor Nancy Wyman are inviting members of the public to attend the state's 12th annual memorial ceremony honoring and celebrating the lives of those killed in the September 11, 2001 terrorist attacks. The ceremony will begin at 5:30 p.m. on Tuesday, September 10, 2013 and will be held at Sherwood Island State Park in Westport.
Family members of those who lost their lives in the attacks will join the ceremony, and the names of the 161 victims with ties to Connecticut will be read aloud.
The state's memorial to the victims of the attacks is located on a peninsula at the park, where people gathered on that day in 2001 to observe Lower Manhattan. The site was also used as a staging area for Connecticut's relief efforts to New York City. 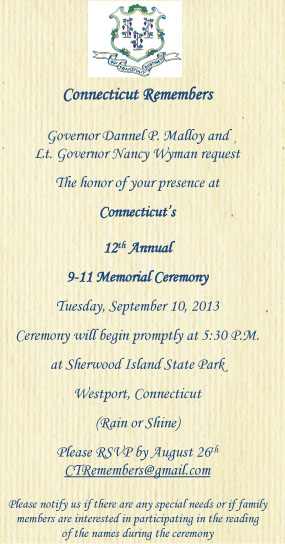