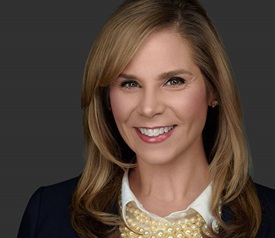 Jacqueline Kozin was appointed Deputy Secretary of the State of Connecticut in 2023. The first in her family to graduate college and a second generation American, she has dedicated her career to public service, working in nonprofits, advocacy organizations, political campaigns and government agencies.

Kozin started her career at the Civic Education Project, an international non-profit organization that worked to support democracy through the development of social sciences and civics curricula in universities throughout the then-newly democratic countries in Eastern Europe and former Soviet Union.
Greatly impacted by 9/11 when living in Manhattan, she returned to Connecticut to work on political campaigns and served as a legislative aide for State Senator Ed Meyer. In 2010, Kozin managed the campaign for Kevin Lembo for State Comptroller and following his election win, served as Legislative Director and Director of Intergovernmental and Community Affairs in the Office of the State Comptroller. In 2018, she joined the campaign of Ned Lamont for Governor as Deputy Campaign Manager. She became Executive Director of the Connecticut Democratic Party in 2019, navigating the party through the disruptive years of the coronavirus pandemic.

Most recently, Kozin served as Special Advisor and Chief of Government Affairs at the Connecticut Paid Leave Authority, helping to launch the state’s newly established program.

Kozin is the granddaughter of Holocaust survivors.  Her father Bohdan Kozin, a native of Ukraine, came to the United States in 1952.  A proud American, Mr. Kozin instilled in his children the importance of voting and civics from a young age.  Her mother, Marilyn Gannon Kozin, has worked as a poll worker and in the office of the New Haven Registrar of Voters.

Kozin graduated from Columbia University's School of International and Public Affairs, with a master’s degree in international affairs and a focus on media and communications. She holds a bachelor’s degree in English from Albertus Magnus College. Kozin grew up in New Haven and lives in East Hartford. She is honored to be able to serve her country, state and its citizens in this position.