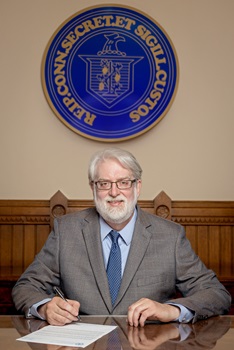 Secretary Kohler retired earlier this year after serving three decades in the Connecticut Attorney General’s Office, finishing as an Associate Attorney General and Chief of the Division of Government Administration.

From 2011-21, Secretary Kohler worked in several departments, including as head of the Special Litigation Department, which is responsible for representing all state constitutional officers, the legislature, and the judiciary, with responsibilities over election matters, charities, gaming, and federal Indian tribal issues. He supervised all department litigation and agency counseling and provided formal and informal opinions to state officials and agencies.

Secretary Kohler served as the head of the office’s public utilities unit from 2009-11 and the finance department from 2003 to 2009. He served in its special litigation department from 1999-2003 and within its finance and public utilities department from 1992 to 1999. Prior to joining the Attorney General’s Office, Secretary Kohler was an associate attorney at Shipman & Goodwin (1990-92) and served as a law clerk to Hon. Thomas J. Meskill of the U.S. Court of Appeals for the Second Circuit (1989-90) and to Hon. T.F. Gilroy Daly of the U.S. District Court for the District of Connecticut (1987-89).

Secretary Kohler earned a Bachelor of Arts degree from the College of St. Thomas in St. Paul Minnesota, in 1982, a Master of Arts degree in political science from Indiana University in Bloomington, Indiana in 1984, and a Juris Doctorate from the University of Connecticut School of Law in 1987.

Secretary Kohler lives in North Haven. He has three daughters, who reside in California.