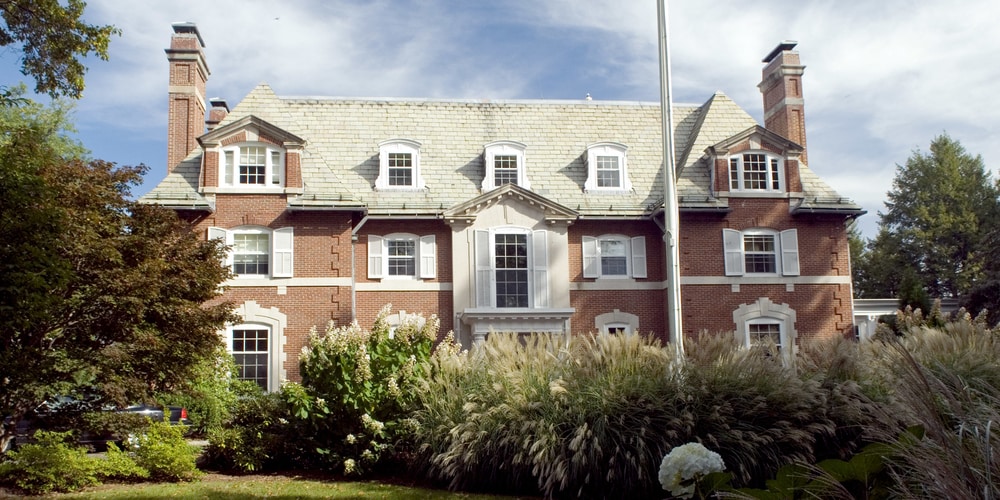 Located at 990 Prospect Avenue in Hartford, the Governor's Residence is used as a site for many official functions of the governor and is made available to nonprofit organizations for charitable events for a small fee, in addition to scheduled free public tours, which are held particularly around the holiday season. It is listed on the National Register of Historic Places.

History of the Governor's Residence

The Governor’s Residence was built in 1909 for the Hartford physician and industrialist George C.F. Williams. Situated at the corner of Prospect and Asylum Avenues in the City of Hartford, the house was designed in Georgian Revival style by the Boston-based architectural firm of Andrews, Jacques & Rantoul. In 1916, the Hartford architects Smith & Bassett designed the north and south wing additions.

A member of the Williams family lived in the house until 1940 when it became too expensive to maintain. The house then stood vacant for several years, though it was briefly used as a convalescent unit by the Hartford Hospital.

The idea of having a residence for the chief executive of the state was first suggested in 1943 by Francis S. Murphy, the publisher of the now-defunct Hartford Times. A search committee was formed, and after reviewing 30 properties the committee decided that the old Williams estate, even though it was in need of repairs, would serve admirably as the official residence. The state acquired it by paying $39,500 to the Williams estate in lieu of back taxes. Another $75,000 was allocated for renovations that were undertaken by Hartford architect Carl J. Malmfeldt. The work took over two years to complete.

The first occupants were Governor Raymond E. Baldwin and his family, who moved in during September 1945. The original restoration was less than successful and featured mismatched furniture in a wide variety of styles. According to Governor Baldwin, the legislature had furnished his house politically, parceling out patronage to merchants in various towns by allowing each one to purchase some of the furniture. The results were such that Mrs. Baldwin told her husband that she would not move in. A neighbor, Beatrice Fox Auerbach, owner of G. Fox & Co., came to the rescue. She removed the offending furniture and brought in her staff of decorators to furnish the Residence with 18th century antiques and handcrafted reproductions. The finest pieces were made by Hartford cabinet maker Nathan Margolis, whose shop had already executed prestigious commissions for John D. Rockefeller, the DuPonts, and Yale University. Soon after the Residence was furnished, the governor invited the public to tea and 5,000 people showed up (the governor, however, had strained his back and was unable to leave his bed to greet the guests).

It is a nonprofit organization and is responsible for planning and supervising the preservation, restoration and maintenance of the Residence and its grounds. The Conservancy is modeled after many similar entities used by other states to care for the residences of governors as well as the White House Foundation. It is committed to furnishing the Residence with a special focus on furnishings created by artists and craftsmen in the State of Connecticut. The public areas of the house have been restored through hundreds of donations and the work of volunteer members of the Conservancy.

The Conservancy has privately raised millions of dollars for the acquisition, restoration, maintenance and care of Connecticut art and furnishings of historic significance for the Governor’s Residence. One of the fundamental goals of the Conservancy is to enhance the Residence and to bear much of the financial burden for its improvements, which would otherwise be an expense of the state. The items purchased or donated are the property of the Conservancy and are on display in the home year-round.  Several of Connecticut’s fine art museums frequently make loans of art for display in the Residence.

Since the Residence was purchased by the state almost 70 years ago, it has needed refurbishment and renovation to preserve it. Major updates were undertaken during the administrations of Governor Weicker and Governor Rowland. More recently, in 2011 during the administration of Governor Malloy, the Conservancy partnered with Connecticut Cottages & Gardens, a Norwalk-based lifestyle magazine, to restore and refurbish the public rooms and cottage of the Residence. The vast majority of the work and materials associated with the project were donated by the Connecticut Cottages & Gardens project team, which used many of the furnishings and decorations already in the home, some of which were repurposed from storage. Additional items have been donated from Connecticut businesses.