The Montessori School on Edgewood was built by the Greater Dwight Development Corporation to serve low and moderate income children and their families in the neighborhood. It opened in 2006 with broad based support from the City, State, and Federal governments and local foundations and funders. The program serves 24 infants and toddlers and 34 preschoolers in a full day full year program, and a majority of the children come from low income single parents families.

MSOE was thrilled to learn we were awarded from the Nonprofit Grant Program.  The grant we received afforded us the opportunity to install a Solar Grid-Integrated Photovoltaic system. The purpose of the solar panel project is to promote the Montessori values of energy conservation and protection of the environment.  Since going solar we have already seen immediate savings which will eventually increase our ability to raise Teachers’ salaries. 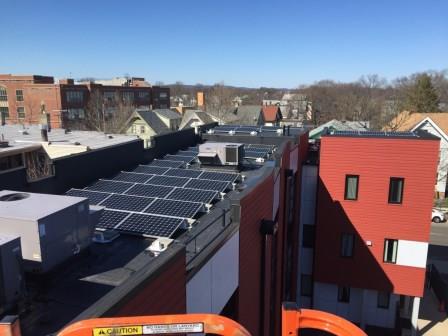