Community Renewal Team, Inc., has been able to make significant improvements and upgrades to its program and operations thanks to funding through the Office of Policy and Management Nonprofit Grant Program. Some of the highlights include: 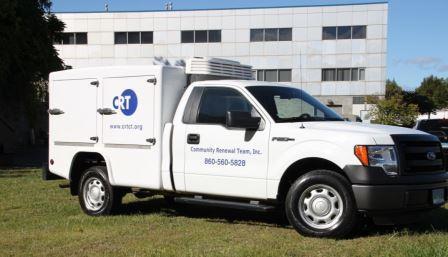 CRT’s Elderly Nutrition Program (ENP) prepares and delivers more than 442,000 meals each year to both homebound elderly and community cafés, helping seniors throughout Connecticut remain healthy and independent.  The Meals on Wheels portion of the program provides delivery of two meals per day, five days a week, 52 weeks a year to homebound elderly residents in the Greater Hartford area. Community Café sites offer a well-balanced lunch to eligible individuals (those age 60 and over) at 36 locations in the Greater Hartford area, including a Kosher site.  Meals are provided five days a week, excluding holidays, 52 weeks a year. CRT’s Food Production Facility also provides catering services to numerous other programs including meals to summer food programs and pre-school children in CRT’s Early Care and Education programs.

The ENP uses a fleet of 24 customized refrigerated/heated catering trucks for both its home-delivered and community café meal programs. CRT follows all manufacturer-suggested maintenance schedules and drivers are responsible for checking their vehicle daily, as well as performing weekly inspections of preventative maintenance items (brake lights, wipers, tires, mirrors, etc.)  Despite the best maintenance practices, as vehicles age repairs become more frequent and more costly, and operations/food distribution is hindered when mechanical failure keeps trucks sidelined.  Because they are used daily, and travel a significant number of miles in all types of weather, ENP vehicles are in constant need of replacement.  However, because they are customized, vehicle replacement does not come cheap. Program funds used to replace vehicles could be otherwise used to purchase and prepare food for elderly program participants, particularly since the ENP has been flat-funded in recent years.

With NGP funds, CRT was able to purchase two replacement vehicles: one smaller truck, specifically for Meals on Wheels delivery, and a larger customized heating and refrigerated catering truck that is used to deliver more than 800 breakfasts, lunches, and snacks daily to our early childhood programs.

Thanks to NGP funding, CRT was able to install solar panels on the roof of our building at 395 Wethersfield Avenue. Over the six months following installation, we saw the evidence of the project’s value: From May through October (prime cooling months), the average monthly electric bill for that building dropped from $1,808 to $1,652. The October 2015 bill showed usage of 36.9 kilowatt hours, while October 2016 showed usage of 29.6 kwh.  Not only is this improvement a step toward clean, renewable energy, it also serves as a long-term savings opportunity, allowing program funds to directly benefit CRT clients.

With nearly $450,000 in NGP funding, CRT undertook two major projects at its Windsor Street office building in the summer of 2016: installation of a generator and a new heating, ventilation and air conditioning (HVAC) system.  The costs were covered by nearly $450,000 from the NGP.

CRT has experienced more than a dozen power outages since 2005. Not only are outages inconvenient, they often cause significant disruptions in the provision of services. The Windsor Street site houses our central kitchen, which prepares more than 1.3 million meals annually. In 2008, a single power outage resulted in a monetary loss of $18,240 to the Nutrition program alone.

The new generator is capable of powering the entire building for more than 15 hours. That’s no small task considering the demands: refrigeration and frozen food storage, IT servers, HVAC, and three floors of office equipment.

During the heat wave in Summer 2015, entire departments in the Windsor Street building were relocated to other sites due to uncomfortable office temperatures. At that time, two rooftop HVAC units were replaced on emergency status. With NGP funding, five additional units were installed to ensure that the office remains a safe, efficient, and comfortable place for staff to work. As a bonus, the HVAC upgrade qualifies CRT for energy rebates which will be reinvested to further maximize energy savings across the agency. 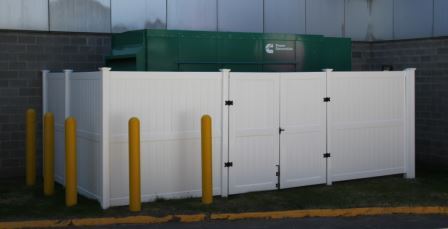