Located in the Shadow of the Pearl Harbor Memorial Bridge, New Park Honors Those Who Served During the Attack on Pearl Harbor 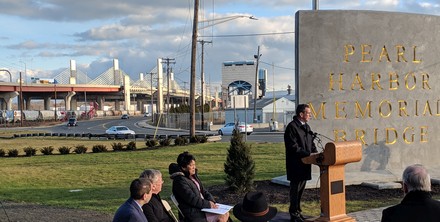 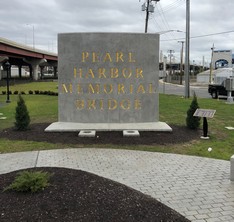 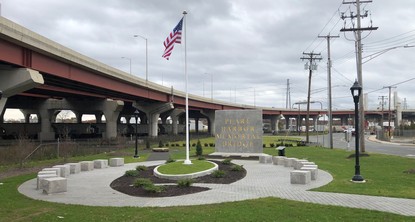 Located at the corner of East Street and Forbes Avenue in the shadow of the newly constructed Pearl Harbor Memorial Bridge, which carries Interstate 95 over the Quinnipiac River, the park serves as a memorial honoring those who served during the attack on the United States in 1941. Today’s ceremony was held on the eve of the 77th anniversary of the attack.

“I am proud and humbled that we have created a place where the families of Pearl Harbor veterans and all Connecticut residents can come to reflect and honor the military personnel who served and sacrificed for our country at Pearl Harbor,” Governor Malloy said. “America turned a very dark day in 1941 – a date that still lives in infamy and that plunged us into war – into an inspiration to fight for freedom and democracy around the world.”

The park was created as part of the I-95 New Haven Harbor Crossing Corridor Improvement Program, a multi-modal transportation project administered by the CTDOT that included the creation of the replacement bridge. It features a center island with a flag pole surrounded by plantings and oval pathways that are flanked by 17 benches to represent the Connecticut servicemen who lost their lives in the attack on Pearl Harbor. A 13-ton replica of a Pearl Harbor Memorial Bridge anchor pier, cast in gold leaf, sits at one edge of the park alongside a plaque that lists the names of the servicemen.

The park includes informative panels from which people can view the bridge and learn about memorial elements. It incorporates some design elements of the bridge and references to Pearl Harbor. Oval pathways mimic the shape and size of the bridge’s anchor piers creating the shape of the letter Q, and the concrete sidewalk leading up to the park was designed to resemble the shape of a submarine sitting in the harbor.

“It was so important for us to include the Pearl Harbor Memorial Park as part of the Pearl Harbor Memorial Bridge Program,” Commissioner Redeker said. “We have engaged our surviving Pearl Harbor veterans from the beginning of the program in 2001 and were honored to be joined at today’s event by Floyd Welch of East Lyme, who survived the attack. Thank you for your incredible service, Mr. Welch. We could not be more proud to have you help us dedicate this park to the men and women with whom you served.”

“It is difficult to believe that 77 years have passed since that fateful Sunday morning which brought American into the second World War,” Commissioner Saadi said. “To our WWII veterans, my heartfelt thanks for their service and sacrifice in saving the United States and hundreds of millions of people from the oppression of Imperial Japan and Nazi Germany. As we celebrate the holidays over the next several weeks, let us not forget those who served and those who made the ultimate sacrifice on that December Sunday, and those who continue to serve in our military so that we may live as a free people in this great democratic nation.”

“New Haven proudly hosts the Pearl Harbor Memorial Bridge, a soaring tribute to the tragedy – and heroism – of the World War II era and Connecticut’s part in it,” New Haven Mayor Toni N. Harp said. “New Haven will now also be the proud home of this new Pearl Harbor Memorial Park, with inspiring views of the bridge and harbor, and room to reflect on both the brutality of war and the honorable sacrifice built into military service.”

During today’s ceremony, a wreath was laid at the base of the memorial’s monument to honor those who lost their lives, and the names of the Connecticut servicemen who made the ultimate sacrifice were read aloud.

Floyd Welch, a 97-year-old resident of East Lyme and the sole remaining Connecticut survivor of the attack on Pearl Harbor, participated in the event. He enlisted in the Navy on January 9, 1941, and two months later was assigned to the battleship USS Maryland in Long Beach, California, which soon deployed to Pearl Harbor. On the day of the attack on December 7, 1941, the USS Maryland was tied next to the USS Oklahoma, and both ships were damaged by the bomb and torpedo attacks. Welch remained stationed on the USS Maryland until he left the ship at Pier 91 in Seattle, Washington, on January 18, 1946, after the end of the war.

“I am honored and so happy to take part in the dedication of the Pearl Harbor Memorial Park,” Welch said.

The Connecticut servicemen who were killed in the attack on Pearl Harbor and are honored at the park include:

Governor Malloy said that it is the intention of the state to soon add a tribute to U.S. Navy Water Tender 1st Class Stephen Pepe of Bridgeport to the group of Connecticut servicemen who are memorialized at the park. Pepe was assigned to the USS Oklahoma on the day of the attack on Pearl Harbor and had been officially listed as missing since 1941. However, following the recent discovery and positive identification of his remains by the U.S. Defense POW/MIA Accounting Agency, his body was returned to his family in October of this year and a burial with full military honors was held.

The I-95 New Haven Harbor Crossing Corridor Improvement Program remains the largest and most comprehensive program ever completed by CTDOT. The $1.8 billion program included more than 30 individual construction contracts completed over a span of 18 years. In addition to the construction of the new bridge, which is the first extradosed bridge in the United States, major contracts on the program included the reconstruction of the I-95/I-91/Route 34 Interchange and the Shore Line East commuter rail station at State Street in New Haven.