(HARTFORD, CT) – Governor Dannel P. Malloy released the following statement regarding the May 2018 labor situation report, which was released earlier this morning:

“The investments and efforts we have made to retain and grow private sector jobs while simultaneously shrinking the size of government are paying off. Today’s job numbers demonstrate that Connecticut has more private sector jobs than we did before the Great Recession. It also reflects the fact that government is smaller today than when I took office – just as I promised to do eight years ago. Make no mistake, Connecticut cannot afford to slow down and lose momentum. We must remain laser focused on an economic strategy that attracts and retains world-class businesses, which put the talent and skill of our first-rate workforce to great use.”

Excluding higher education, the state workforce is 13 percent smaller today than when Governor Malloy took office in 2011. This drop in employment is largely driven by attrition. In fact, the number of state workers for every state resident is at its lowest levels since 1960. 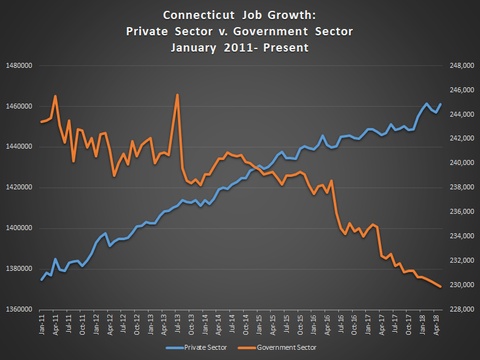