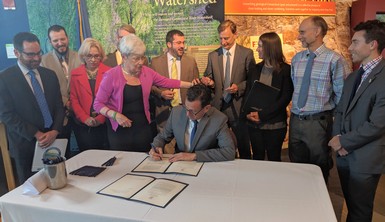 (HARTFORD, CT) – Governor Dannel P. Malloy today held a bill signing ceremony in Hartford to commemorate the final passage of two pieces of legislation he introduced that will further Connecticut’s role as a national leader in environmental protection and put the state on a more sustainable path by decreasing statewide greenhouse gas emissions and increasing the usage of renewable energy.

“The time to act is now,” Governor Malloy said. “The effects of climate change, which is unquestionably man-made, can be felt in Connecticut and poses a threat to our residents. Rising sea levels are putting our coastal communities in harm’s way. While President Trump, EPA Administrator Pruitt, and their Republican allies in Washington roll back critical environmental protections, Connecticut is stepping up. These two new laws demonstrate, once again, Connecticut’s determination and leadership in combating climate change to keep our planet and residents safe, all while still being economically advantageous.”

“I applaud Governor Malloy and Commissioner Klee for their tireless work to better prepare the state for the impacts of a changing climate,” Lt. Governor Nancy Wyman said. “National leadership requires continued effort, and these bills will ensure Connecticut’s ongoing progress to mitigate greenhouse gas emissions and reduce our impact on the climate.”

“In his farewell address to the nation, President Obama called for bolder action to address the issue of climate change,” Department of Energy and Environmental Protection Commissioner Rob Klee said. “With the passage and signing of these two transformational pieces of legislation, Connecticut is taking that bolder action. While the current federal administration continues to deny human induced climate change as real, it is incumbent upon states to take action. For the sake of future generations to follow, I encourage other states to look at what we have done as a state and follow our lead.”

The environmental bill – Public Act 18-82, An Act Concerning Climate Change Planning and Resiliency – contains a number of provisions to reduce greenhouse gas emissions and prepare the state for the ongoing effects of climate change and sea level rise, including: