(HARTFORD, CT) – Governor Dannel P. Malloy and State Department of Education Commissioner Dianna R. Wentzell today announced that the State of Connecticut has been making progress in its efforts to reduce achievement gaps, according to the 2017 National Assessment of Educational Progress (NAEP) – a report known as the “Nation’s Report Card” created by the National Center for Education Statistics.

The report shows that Connecticut’s overall student performance in Grades 4 and 8 in reading and mathematics is stable when compared to results from the last administration of NAEP in 2015 for all students and student groups. Connecticut scored higher than the nation in reading in Grades 4 and 8 and in Grade 8 mathematics, while the state’s fourth graders performed the same as the nation in mathematics. Additionally, over the six-year period from 2011 to 2017, fourth graders are showing progress in reducing the achievement gap in reading.

“We have a fundamental responsibility to provide an opportunity for all children to succeed,” Governor Malloy said. “With graduation rates at a record high and reductions in some of most persistent achievement gaps, we are making progress toward that goal. I am proud of our students and teachers across the state who are working hard every day to make Connecticut’s future even brighter.”

“While Connecticut’s overall performance remains steady, we recognize the importance of expanding on and accelerating some of the improvements we did see in the 2017 NAEP results,” Commissioner Wentzell said. “This includes focusing on bright spots such as the gap closure in Grade 4 reading and the narrowing of performance gaps between the state’s student subgroups. We continue to build on these positives. Only through a systemic approach to addressing the needs of all students can we collectively achieve the equity and excellence goals set forth in the State Board of Education’s Comprehensive Five-Year plan.”

For an explanation of statistical significance and why it is used in NAEP reporting, click here.

1 NSLP is the National School Lunch Program. Eligibility is used as a proxy for measuring poverty.

While these results provide signals that Connecticut is making headway in addressing persistent and troubling achievement disparities, there is room for improvement, especially in mathematics. When mathematics scores are reported by individual student groups, it shows that in several cases, Connecticut’s students are performing lower than their peers nationally. 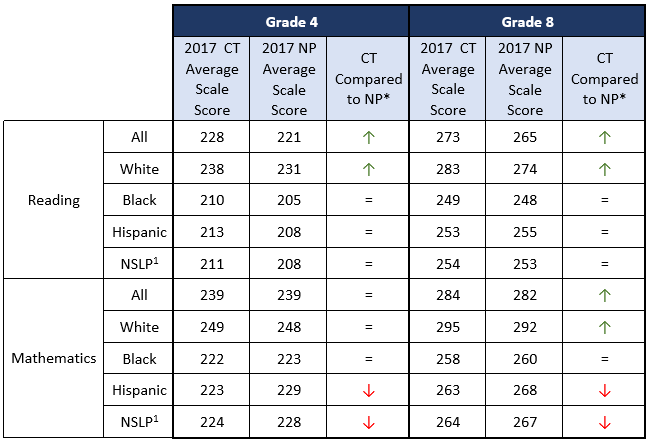 An arrow is used when the difference between the scores is statistically significant. For an explanation of statistical significance and why it is used in NAEP reporting, click here.

The gap reductions evidenced in the 2017 NAEP results – particularly in Grade 4 reading – affirms that improvement is achievable. Therefore, SDE in partnership with districts remains committed to enhancing efforts around: