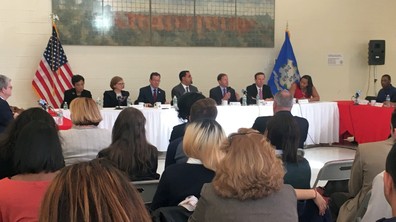 “For too long, we focused on building prisons when we should have been investing in our schools. One of the most effective ways we can make a difference is by keeping our kids in school and out of the criminal justice system,” Governor Malloy said. “School districts around the state are embracing this idea and shifting their focus from punitive discipline toward restorative discipline. Programs like the School-Based Diversion Initiative and YouthStat are having a positive impact on the lives of Connecticut’s students. In-school and out-of-school suspensions and expulsions have trended downward across the state over the last several years, which means that Connecticut schools are doing a better job of keeping kids in school and on the right path.”

“In Connecticut, we are proud of the hard work that is being done in school districts, like New Haven, to improve responses to disciplinary issues,” Commissioner Wentzell said. “Schools are making progress by engaging with community partners, identifying best practices, and providing training on family engagement, mental health, conflict de-escalation, and restorative justice. We are also proud to see districts and schools embracing Governor Malloy’s Second Chance Society reforms. The focus on rehabilitation and strengthening communities helps to keep our students in school and disrupt the school to prison pipeline.”

In 2015, Governor Malloy announced the Second Chance Society initiative, a series of criminal justice reforms that are focused on reintegration and rehabilitation in order to prevent recidivism. This initiative was implemented at the state level, as well as the school and district levels, and one component was a critical investment into the expansion of the Connecticut School-Based Diversion Initiative (SBDI). SBDI works to reduce juvenile justice involvement among youth with mental health needs, as research shows that youth with mental health needs are more likely to come into contact with the juvenile justice system.

At Wilbur Cross High School students participate in SBDI programs such as A.L.I.V.E., which works with students on an individual basis to help them work through trauma. Additionally, Wilbur Cross has established a partnership with Southern Connecticut State University’s social work program, which provides social work interns to counsel students at the school.

The New Haven school district has adopted restorative discipline programs in addition to SBDI. In 2014, New Haven Mayor Toni Harp announced YouthStat, a nationally recognized program that uses data to identify students who are at risk of dropping out or becoming disengaged from school and connects them to resources in the community.

“All of us in New Haven are proud to welcome Secretary King to the city today – we embrace this chance to showcase for him some of the innovations we have in place to identify and help at-risk young people and match them with appropriate programs and services,” Mayor Toni N. Harp said. “The ideas built into these innovations are well-received by other American mayors I meet. I hope today’s visit makes them the topic of conversation among many Washington-based policy makers as well.”

“YouthStat is changing the lives of hundreds of New Haven students. More than 15% of the city’s YouthStat students are from Wilbur Cross and you can see the difference the extra support and intentional engagement is making with the school’s culture and climate,” Interim Superintendent Mayo said. “We’ve brought community organizations and social service agencies together to ensure student support is happening in collaboration with everyone who is invested in the student’s success. Attendance rates are increasing, suspensions are down, and our graduation rate is the highest it's been in years. This holistic, intentional, and targeted approach to intervention and engagement is working for our students and it's becoming a crucial part of helping prepare each of them for college, career and life after high school.”

A recent report commissioned by the Dalio Foundation found that 39,000 Connecticut students are disengaged or disconnected, meaning they have dropped out of school or at risk of dropping out of school. The report, on which the CSDE collaborated, estimates that halving the number of disengaged youth would reduce rates of incarceration, decrease youth unemployment, improve Connecticut’s graduation rate, and boost the state’s economy.

While Connecticut has seen encouraging declines in chronic absenteeism and suspension/expulsion rates in recent years, Monday’s discussion acknowledged that there is still a great need to focus on critical strategies such as the School Based Diversion Initiative and other programs aimed at addressing disengaged youth.

More information about the School-Based Diversion Initiative can be found online.