The following economically-important infectious oyster diseases are present in CT: MSX (Multinucleated Sphere Unknown, due to Haplosporidium nelsoni), SSO (Seaside Organism, due to Haplosporidium costale), Dermo (due to Perkinsus marinus) and ROD (Roseovarius Oyster Disease, due to Roseovarius crassostreae). The clam disease QPX (Quahog Parasite Unknown, due to a Labyrinthomorpha) is detected in quahogs.

Standard ways to measure diseases in a population are prevalence (percentage of shellfish that have the disease) and weighed intensity (an overall standardized score to assess infection level in a group of shellfish). In order to monitor these important diseases, DA/BA had a shellfish pathologist that histologically determined disease prevalences and intensities statewide from 1997-2016. After the retirement of the DA/BA pathologist, USDA funding supported genetic disease surveillance at Roger Williams University from 2019-2021 using triplex polymerase chain reaction (PCR). PCR is innately more sensitive than visual examination and detection of diseases in shellfish tissue; however, weighed intensity is a standard measurement used to assess severity of infection regardless of the analysis method. In a study comparing histology and PCR detection, an average of the 4 Norwalk, CT oyster samples revealed that the PCR method had an increased detection of 28.33%, 16.67%, and 6.67% for Dermo, MSX, and SSO prevalences, respectively (Russell et al. 2004). 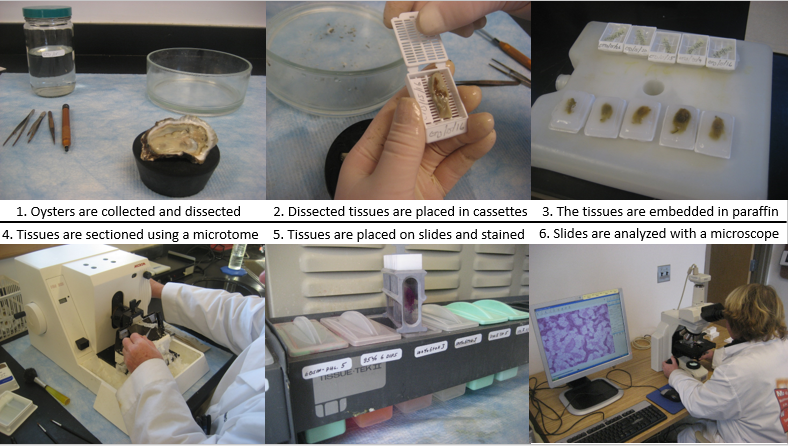 MSX is a particularly important oyster disease on the U.S. east coast. MSX caused the first east coast outbreak in Delaware Bay, New Jersey in 1957; began impacting the Chesapeake Bay in 1959; and was reported in Connecticut and Cape Cod by 1960 and 1967, respectively (reviewed in Burreson and Ford 2004 and Burge et al. 2014). By the 1980-90's, the parasite's reported range included the entire east coast, and epizootic events with significant mortality events were reported from the Chesapeake Bay to Maine. In Connecticut, a significant MSX epizootic event caused widespread infection and mortalities in adult oysters in 1997, and subsequently infected the oyster seed populations in 1998. Through natural disease resistance, as well as the development of MSX-resistant oyster strains and implementation of disease management strategies by the DA/BA, Connecticut oyster populations began recovering by 2004. In 2012, every oyster tested was negative for MSX. However, the 2019-2021 triplex PCR data indicate that MSX prevalence and weighed intensity could be increasing in recent years. Milder winters have been associated with increased MSX infection pressure, and may have played a role in the expansion of MSX up the east coast.
MSX occurs in CT as a co-infection with another haplosporidian parasite, SSO. SSO has been associated with high mortalities in the New Jersey, Delaware, Virginia, and Maryland area, but has not caused widespread issues in CT (Sunila et al. 2002). Triplex PCR (2019-2021) data also indicate an increase in SSO prevalence, as all prior histology data (1997-2016) indicated that annual SSO prevalences were less than 1%. 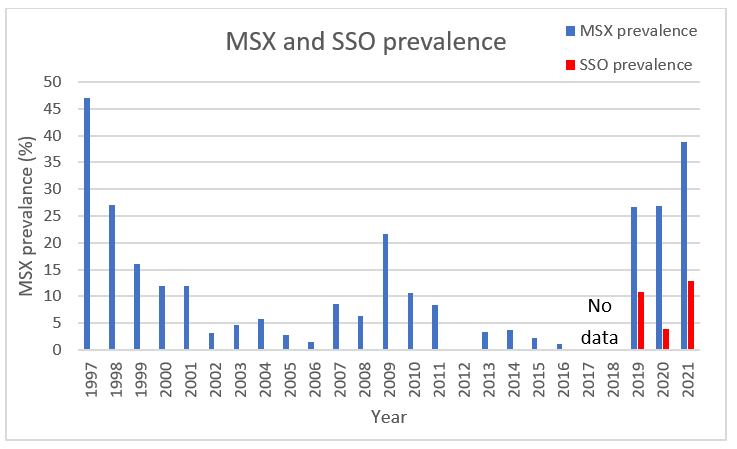 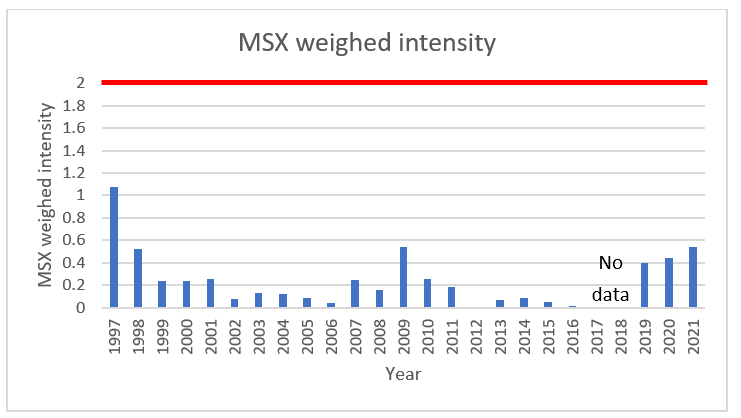 Coinciding with the movement of MSX up the U.S. east coast, Dermo also began moving northward into New England and caused intensified disease outbreaks starting in the mid-1980's (reviewed in Burge et al. 2014). It is believed that temperature was the major controlling factor preventing Dermo from moving into New England until the mid-1980's, as climatic patterns have shifted towards milder winters (reviewed in Burge et al. 2014). However, recent evidence also suggests that a hypervirulent phenotype emerged in the 1980's, and significantly impacted Chesapeake Bay, New Jersey, and South Carolina (Carnegie et al. 2021).
While Dermo has not caused widespread mortalities in Connecticut oysters, Dermo has consistently remained at high annual average prevalences statewide. Dermo prevalence remains high across the entire coastline. A common Dermo disease management strategy continues to be harvesting shellfish at the age of 3, as Dermo is a slow-killing disease and could cause mortality in Connecticut oysters grown beyond the ages of 3-4. Modeling by Ben-Horin et al. (2018) demonstrated that sufficient oyster aquaculture harvest actually reduces Dermo disease burdens on wild oyster populations by diluting parasites in the environment. 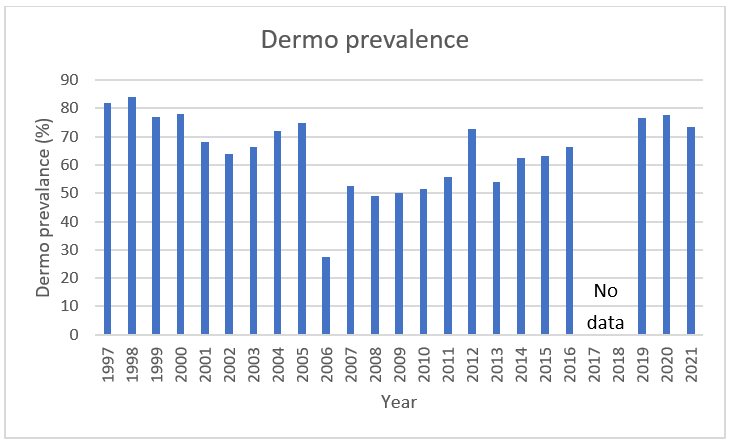 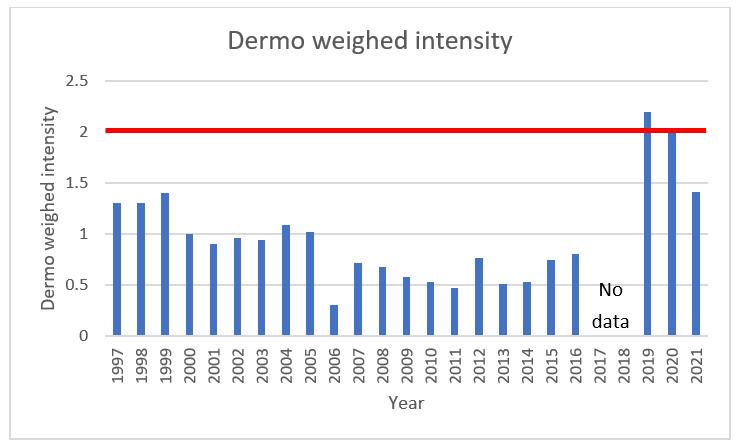 Factors Affecting the Health of Oysters - Oysters are long-lived, sessile animals, which feed by filtering large quantities, up to 100 gallons, of seawater per day. They accumulate hundred folds of micro-organisms and pollutants.  These characteristics make them susceptible to diseases. Several factors can cause pathological changes in oysters. Different factors affect them during their planktonic, larval stage. The sum of environmental stimuli, together with the genetic make up of the oysters, will determine their likelihood to get ill.

Dermo Disease is caused by a single-celled Protozoan parasite, Perkinsus marinus. Originally, it was thought to be caused by a fungus and named Dermocystidium marinum. Even after the reclassification the disease is commonly called “Dermo.”

(Multinucleated Sphere Unknown) disease is caused by a single-celled Protozoan parasite, Haplosporidium nelsoni.  is lethal to the eastern oyster (Crassostrea virginica), but it is not known to be harmful to humans.

Roseovarius Oyster Disease (ROD), previously known as Juvenile Oyster Disease (JOD), affects hatchery-raised seed of eastern oysters, Crassostrea virginica, on the east coast from to . The disease is caused by a marine a–proteobacterium Roseovarius crassostreae, a member of the Roseobacter clade. ROD has affected hatchery-raised oyster seed in the past however, resistant oyster seed is available.

Quahog Parasite Unknown (QPX) has caused mortalities from Virginia to Atlantic Canada and infects cultured clams at a significantly higher rate than wild clams (Maille et al. 2007). QPX is a slow and chronic disease (Dahl and Allam 2007). QPX has been detected in 0.3% of Connecticut's quahogs (six positive cases) and is not considered to pose a threat to the clam industry. 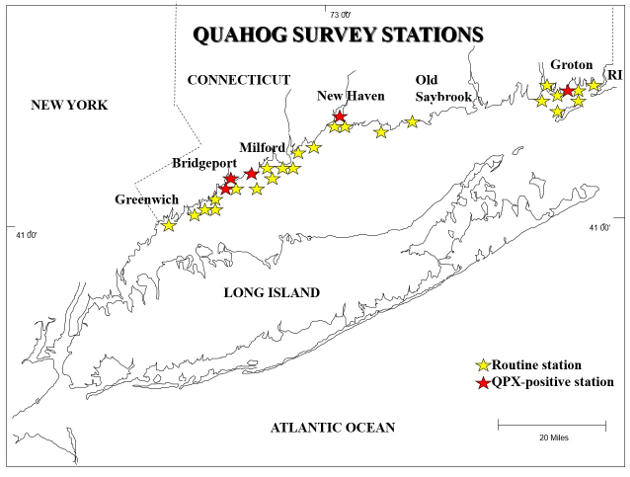 Connecticut Routine Quahog Survey Stations. Stations that had at least 1 QPX-positive clam are identified with a red star.

The detection of 1 hard clam with the new infectious disease, hemocytic neoplasia (HN), in 2020 highlights the need for continued vigilance and adaptation to prevent emerging disease outbreaks. The clam was imported from a New Jersey hatchery. The presence of a new disease in Long Island Sound underscores the importance of routine disease surveillance in Connecticut and acquiring health reports before shellfish are imported. HN is a relatively new disease and is consequently not well understood, but it is caused by cells that invade hard clam tissues, causing hemocytes to become non-functional (Roger Williams University 2021). Therefore, HN is an infectious disease that can be transmitted between hard clam populations (Smolowitz 2021). Some areas are already experiencing mass hard clam mortality events due to HN, such as in Wellfleet, MA; however, this disease is predominately believed to impact hatchery hard clams and it is unknown how far the infectious cells can be transported (Smolowitz 2021). HN was first detected in cultured hard clams in Wellfleet Bay starting in 2009 and has subsequently spread throughout the harbor (Smolowitz 2021). Hard clams that are collected on the surface tend to be positive and have a more advanced stage of HN than clams that are in the sediment (Smolowitz 2021). This form of neoplasia is related to neoplastic diseases in other bivalves but is distinct (Smolowitz 2021). There is no treatment, but clams with low infection levels are able to survive and produce disease-resistant offspring, which is occurring in Wellfleet, MA (Smolowitz 2021).

Information cited as Smolowitz 2021 was provided during a zoom presentation by Dr. Roxanna Smolowitz. 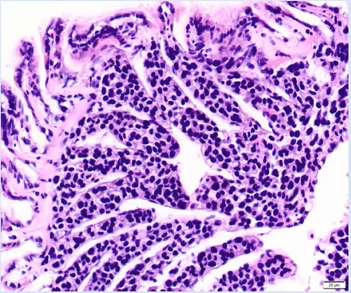