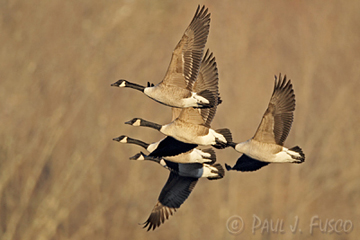 Resident Canada geese in Connecticut create a myriad of nuisance problems in many of our public parks and recreational fields. Long-term solutions to these problems are complex and often difficult to fully implement. Most important in formulating a management strategy for alleviating nuisance goose problems is to begin with the understanding that ultimate success will take some time, and unless human tolerance of geese is to change, reduction of the goose population is going to be a necessary part of any lasting solution.

Methods for the alleviation of goose problems can be broken down into non-lethal and lethal categories.

Non-lethal methods for goose alleviation can be aimed at modifying goose behavior, human behavior, or the habitat that is attractive to geese.

Do Not Feed Waterfowl 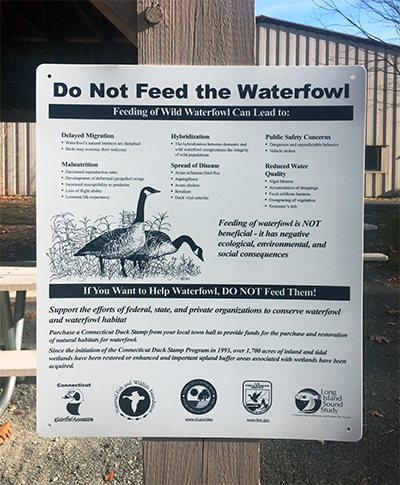 One of the easiest, and most effective non-lethal methods is a simple one – prohibit the feeding of geese. Feeding of geese can be traced as the root of many problems and the cause of persistent problems in urban areas. Feeding not only attracts birds to an area, but keeps them there. Feeding also conditions the birds to lose their fear of humans. Simply discontinuing feeding can go a long way in ending goose habituation to an area.

Other non-lethal methods geared at modifying goose behavior include various hazing techniques and chemical repellents. Hazing is a means of scaring geese from an area, with the intent of moving them to a location where they do not pose a nuisance. Unfortunately, in such an urbanized state as Connecticut, moving birds from one area to another typically results in merely moving the problem to somewhere else.

Hazing techniques that are typically employed include: noise-making devices, visual deterrents/barriers, motorized vehicles, and trained dogs. All hazing techniques can be successful, but geese are very adaptable and, unless some type of lethal reinforcement is used in conjunction with hazing, geese typically become unfazed by hazing. Most hazing programs are more effective when several different types of techniques are used rather than merely relying upon one method.

Noise-making devices, such as cracker shells, screamers, propane cannons, sirens, and air horns, are used to scare birds from an area. These devices are inexpensive and can be effective; however, they are not well suited for many urban situations and, in the absence of some sort of lethal reinforcement, geese quickly adapt to the noise and the desired effect is not attained. In some instances, taped distress calls have had success, but the effects are typically short-lived.

Visual deterrents and barriers are relatively inexpensive and can be effective. Visual deterrents, which include Mylar tape, balloons, flags, and scarecrows, are used to prevent geese from flying into an area. Geese are particular about where they land and how they take off. Visual deterrents can be very effective in keeping geese from flying into and using a given piece of land. Mylar tape, balloons, and flagging are typically strung throughout an open area to deter use. In many urban situations, such as playing fields, golf courses, and parks, these visual deterrents may not be appropriate due to human use of the area. Flagging and balloons, however, can be used on a playing field and removed prior to use.  Drawbacks in the use of visual deterrents are that they can degrade the aesthetics of an area, typically require regular maintenance, and may be targets for vandals. Geese typically become habituated to these devices, especially if they are used alone.

Placing grid wires above ponds will keep birds from using a small waterbody. Grid wires need to be flagged so that birds can see and avoid them. This technique is not well suited to large areas and will detract from the area’s aesthetics.

Lasers have been shown to be effective at keeping geese off of roosting ponds. Shining lasers at roosting geese often causes the flock to leave the pond and find another roosting site. This method does not help with nuisance issues associated with feces, feathers, and turf damage, but it may assist in water quality concerns at public drinking supply or swimming areas.

Motorized model airplanes and boats have been used with success in certain situations. This technique requires constant monitoring because geese will come back once the plane or boat is gone. Golf carts, powerboats, and other motorized vehicles are sometimes used to haze geese from an area. These techniques are often used out of frustration and have limited long-term utility.

Trained border collies have been shown to be effective in hazing geese out of certain areas. Several private companies in Connecticut offer dog services for goose problems. The main drawbacks of using dogs are cost and the fact that geese are simply displaced, which may cause problems elsewhere. Additionally, geese tend to come back to the area from which they were chased once the dog is gone.

Chemical repellents are topical treatments to grasses that make the turf unpalatable to grazing geese. While they can be effective, chemical repellents are expensive and must be re-applied after it rains. They are practical for small lawns, such as those bordering a lake or pond, but not well suited for large expanses of turf.

Installing fencing as a barrier to goose movements from a waterbody to a feeding area is effective during the flightless molt period. When the geese have the ability to fly, this fencing loses much of its effectiveness.

Planting shrubs and small trees along the water’s edge or interspersed throughout a feeding area can be effective. Geese need space to land and take off and also are uncomfortable feeding in areas where their view of potential predators is poor. Unfortunately, planting shrubs on a recreational field is not practical nor appropriate.

Allowing grass to grow to a height of one foot or more will make an area less attractive to feeding geese. However, in many of the urban areas where geese pose a nuisance, allowing lawns to grow taller grass is in direct conflict with current public use. Other methods of making turf less attractive to feeding geese include reducing fertilizer use, cease watering, and planting less palatable species. Some less palatable species include mature tall fescue, periwinkle, myrtle, pachysandra, English ivy, plantain lily, and ground juniper. These options may be acceptable for private landowners, but for most public use areas, they are not feasible.

Non-lethal techniques can be effective, particularly if several different methods are used in concert with each other and at the appropriate time (i.e., it is futile to install fencing around a pond if birds are flying in to feed). Most of the available non-lethal methods, except for habitat modification, are transitory in their effectiveness. Without “harsher” reinforcement, non-lethal techniques typically do not provide long-term solutions.

If habitat is not altered and human tolerance levels do not change, some level of population reduction in concert with non-lethal conditioning is the only way to be successful in the long-term. Population reduction can target annual production (eggs), the adult component, or both. This method, in whatever form it takes, is controversial. Decision makers must be prepared to field some discontent from the public once it is decided that the local goose population is going to be reduced.

Targeting annual reproduction through egg addling, oiling, or puncturing is a popular, relatively uncontroversial way of curbing population growth. Geese are a long-lived species. In Connecticut, most resident geese residing in urban areas can live up to 15 years. They can be productive for 12 of those 15 years, with an average clutch size of 6. Egg addling will halt population growth, if and only if, more than 80% of nests are treated annually. It is very difficult to reduce the local goose population by merely halting annual production because egg addling targets the segment of the population (young) that already has the highest mortality rates. A simplified online registration process replaces the need to apply for and obtain a Federal depredation permit to addle eggs. Before any type of action can occur, participants must register with the United States Fish and Wildlife Service (USFWS).

Reducing the number of breeding adults is the only way to initiate and maintain a population decline of Canada geese. There are a number of ways to remove adult geese: hunting, depredation permits, and round-ups. Regulated hunting is an extremely effective method for reducing resident goose numbers and also keeping remaining birds from using an area. Hunting has resulted in a decline in goose numbers and problems in areas of the state where hunters have access to the birds. Connecticut has liberal goose hunting seasons, which have had a significant impact on resident geese in rural areas. In urban settings, the utility of hunting is limited, thus other means of reducing adult survival are necessary. Many golf courses in Connecticut allow hunting and, where feasible, hunting should be considered. View information about current Canada goose hunting regulations in Connecticut.

The USFWS also issues goose depredation permits to qualifying individuals and municipalities. These permits allow for the removal of geese, typically 1-2 per day, in conjunction with active non-lethal methods. The removal of 1-2 geese per day, up to the number allowed by the permit, serves as negative reinforcement to on-going hazing activities. 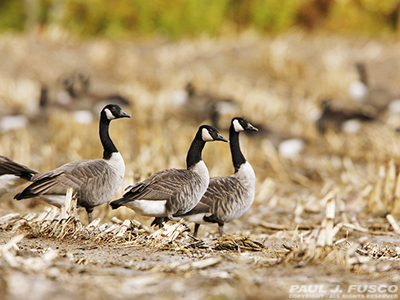 In an effort to provide more tools for the alleviation of resident goose problems in urban areas, the Connecticut State Legislature passed Public Act 03-192 in 2003. This Act allows municipalities, private homeowner associations, and certain non-profit groups to conduct goose round-ups. These operations, conducted during the flightless molting period, can immediately relieve an area of nuisance geese. Geese are herded into portable nets and euthanized, and the meat is donated to soup kitchens and the needy. Many towns in other states participate in round-ups which has shown to be an effective method in reducing their nuisance goose problems. Contact the DEEP Wildlife Division’s Migratory Game Bird Program for more information about this program (860-418-5960).

Any successful goose abatement program should include several different non-lethal techniques and, to be successful in the long-term, must also include some type of lethal removal. Geese are prolific and adaptable and, in many urban areas, population levels are well above what humans will tolerate. Despite its attractiveness, merely moving the problem to the next town or public park is not a workable solution. Ultimately, towns need to take advantage of the tools that are presently available and work with adjacent towns and DEEP to reduce the urban goose population and the problems they pose.