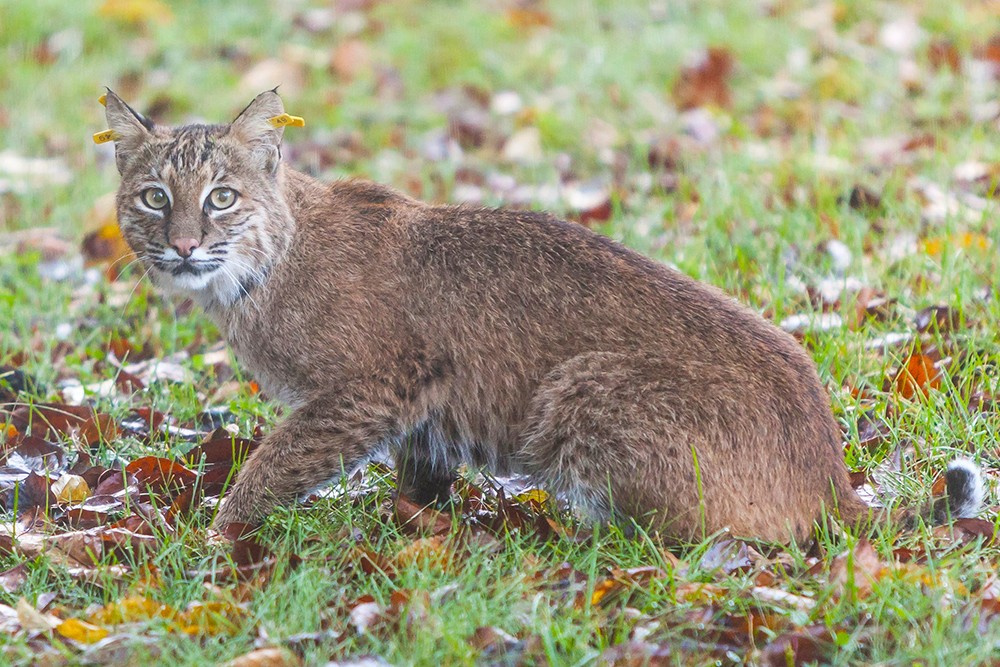 View a map of current bobcat sightings in Connecticut

Bobcat Webinar: Learn about Connecticut's Bobcat Project to assess the state's bobcat population, presented by Melissa Ruszczyk, along with  Laura Rogers-Castro and Jenna Lopardo, of the Wildlife Division.

Connecticut's once dwindling bobcat population was facing extirpation until 1972 when unregulated exploitation was halted, and the bobcat was reclassified as a protected furbearer with no hunting or trapping seasons. The bobcat population has since recovered due to improving forest habitat conditions and legal protections. By 1825, only 25% of Connecticut was forested due to deforestation from agricultural activities and other uses of timber. Today, nearly 60% of Connecticut is covered in forest, and bobcats are regularly observed throughout the state. Photo (above) courtesy of J Isaac Doty. 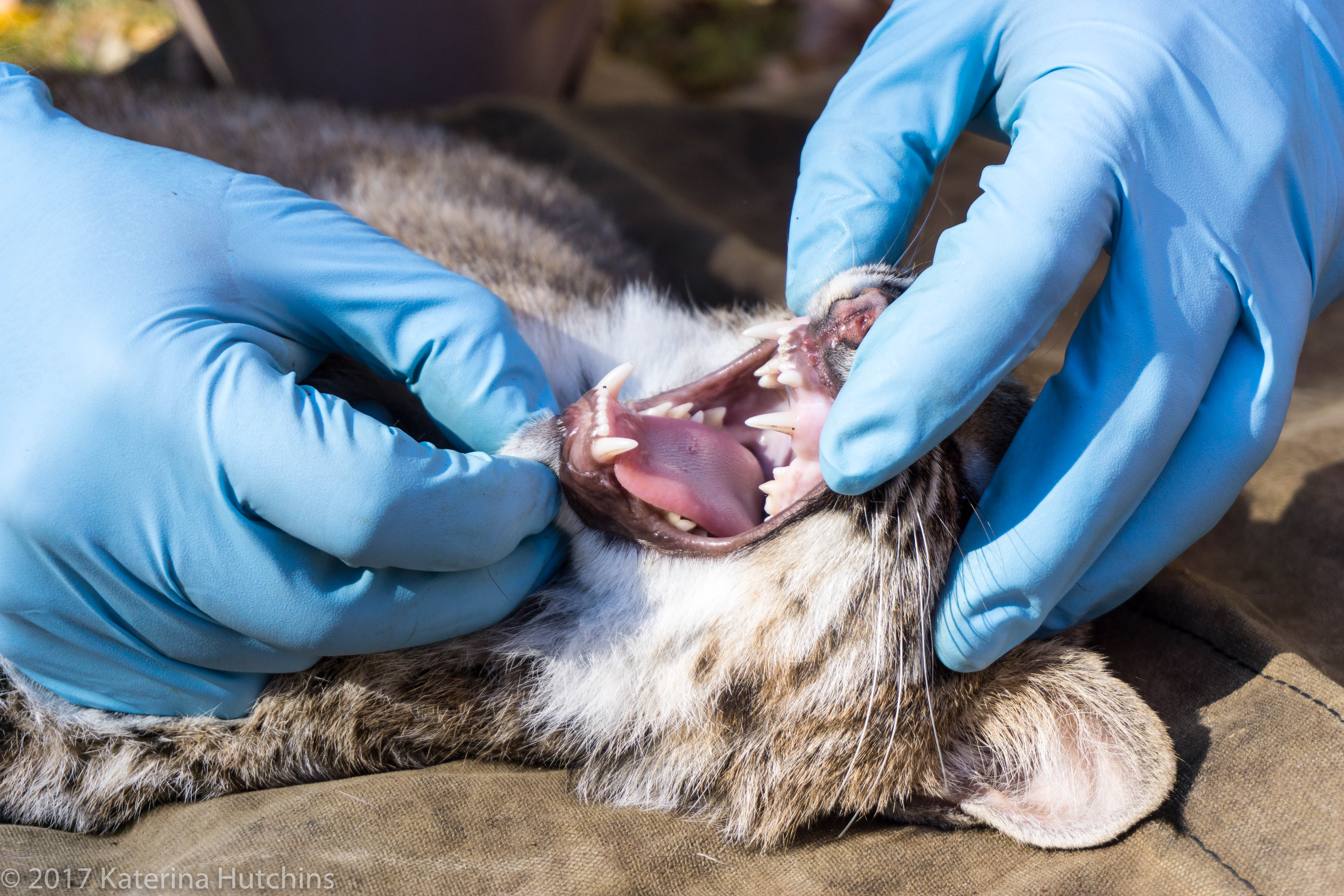 It is important to monitor the state's bobcat population because the presence of these top predators affects many other species, including prey species and competing predators.

In Connecticut, bobcats prey on cottontail rabbits, woodchucks, squirrels, chipmunks, mice, voles, white-tailed deer, birds, and, to a much lesser extent, insects and reptiles. Bobcats, on occasion, may also prey on unsupervised domestic animals, including small livestock and poultry.

Do bobcats have a preferred prey? Which food sources in Connecticut do bobcats depend on most? To answer these questions, along with others, the Wildlife Division has been examining stomach contents from road-killed bobcats to better understand the bobcat's dietary habits.

Learn more about that natural history of bobcats from our Bobcat Fact Sheet and Bobcat Kids Page. 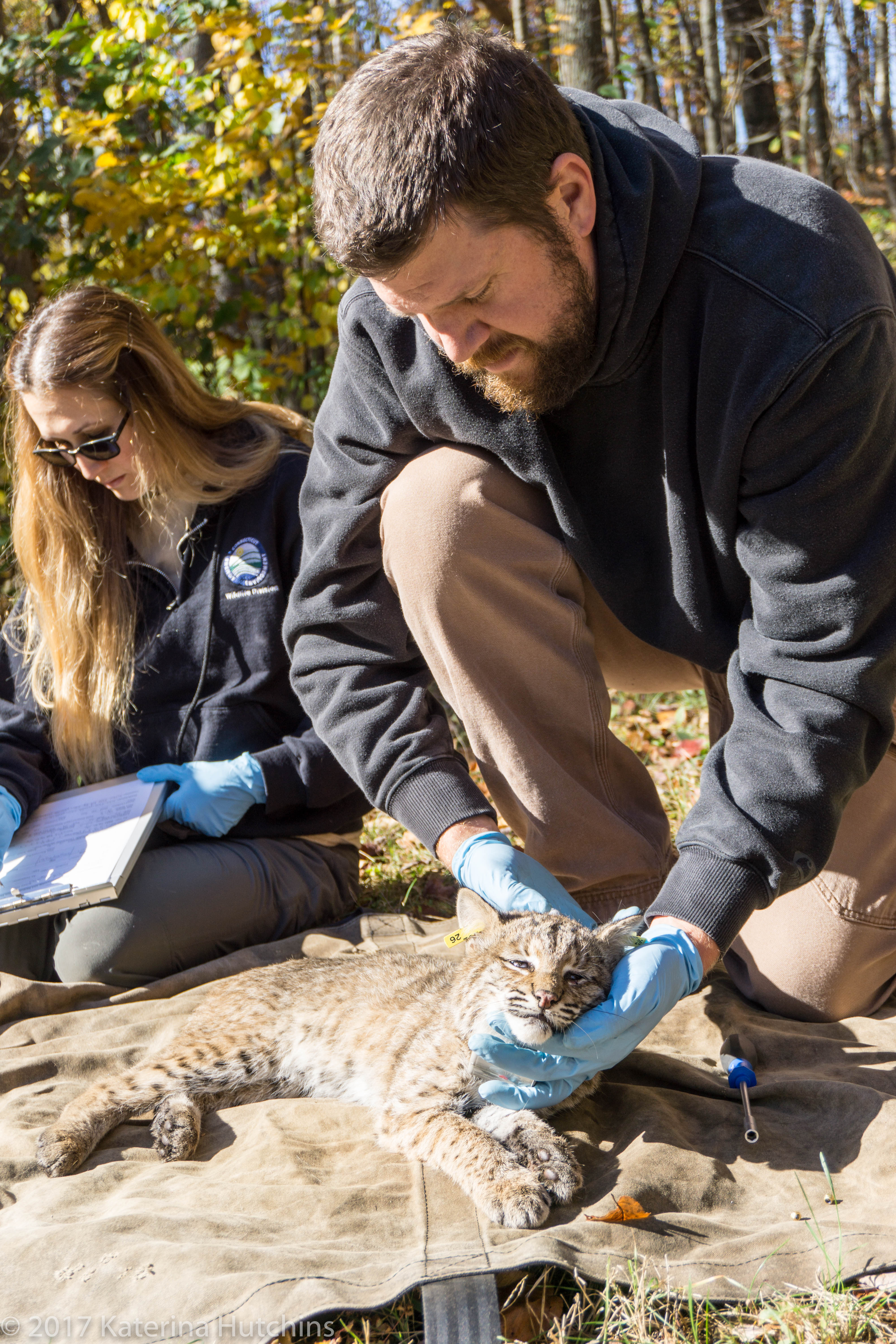 The DEEP Wildlife Division initiated a bobcat study in 2017 to investigate bobcat habitat use in different housing densities in Connecticut. Biologists want to determine how the state's bobcats meet their needs in both rural and urban areas, as well as how successful bobcats are at reproduction and survival.

Methods: With the assistance of local trappers and volunteers, the Wildlife Division live-trapped 150 bobcats, marking them with yellow ear tags and placing GPS (Global Positioning System) collars on selected bobcats (but not all). Biologists also collected important data from each bobcat, including weight, age, and sex. All of the collars were programmed to automatically detach from the animals, and they were recovered by DEEP staff.

Telemetry and GPS Collars: Radio telemetry is a valuable tool that allows biologists to track animals from a distance. In general, biologists are able answer questions related to the location, dispersal, migration, activity patterns, and home range of the target animal. 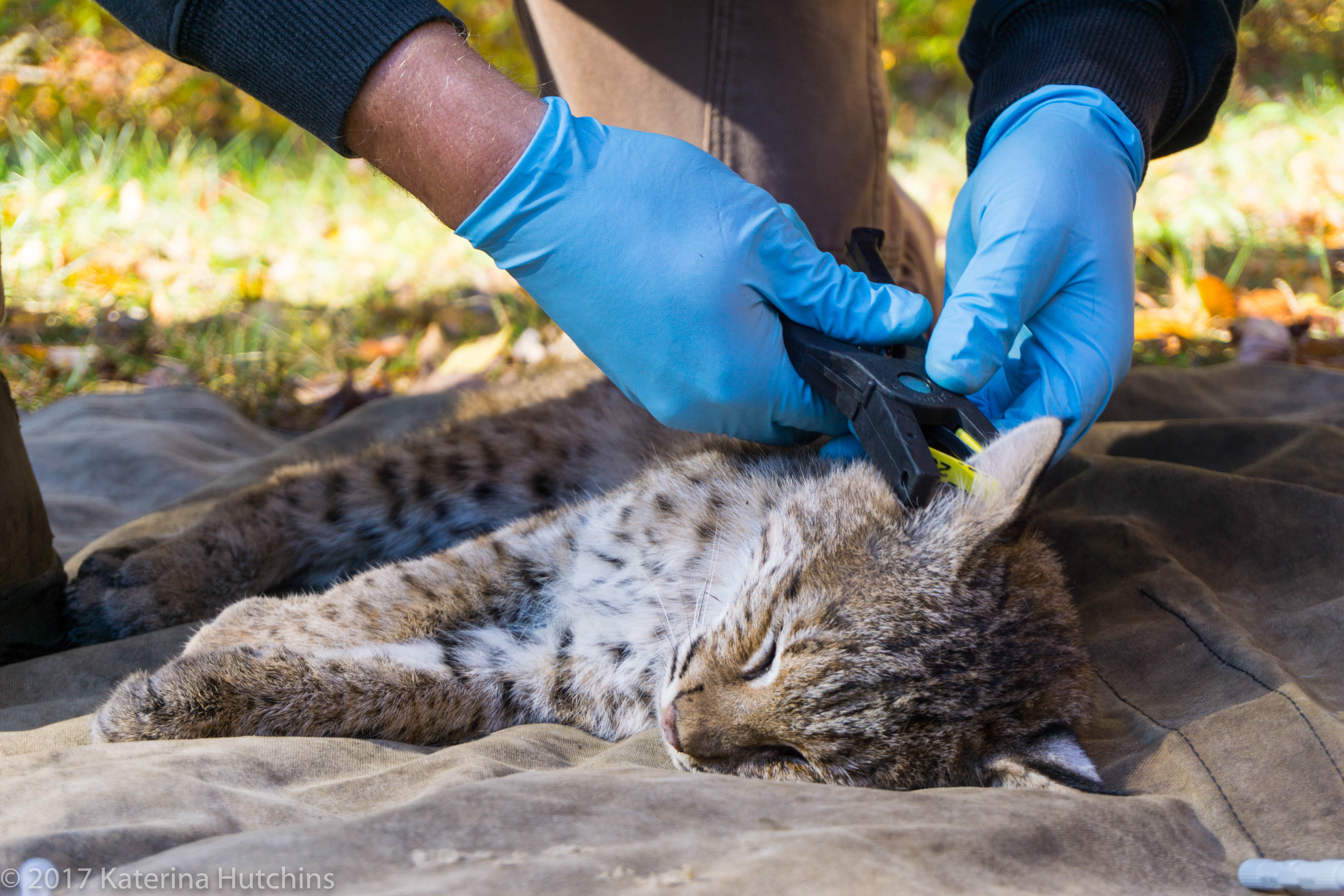 Examining Stomach Contents: To help better understand the dietary habits of bobcats, biologists have been examining the stomach contents of road-killed bobcats.

Some of the highlights from the study so far include (more to come):

Anyone who finds a ROAD-KILLED BOBCAT is urged to call the Wildlife Division at 860-424-3011 and provide location details. (Please DO NOT report sightings of live bobcats at this number -- see below on how to report sightings.) To ensure the bobcat carcass remains until DEEP staff are able to collect it, we additionally ask (if the situation is SAFE) that you move the bobcat further from the road and cover it with branches or a bag. Avoid handling the carcass and use a shovel, branch, or other item to move it.

To determine bobcat abundance and distribution, we are relying on help from Connecticut residents to report observations of bobcats. Reports from the public are greatly appreciated and will be invaluable towards understanding the current bobcat population in Connecticut. 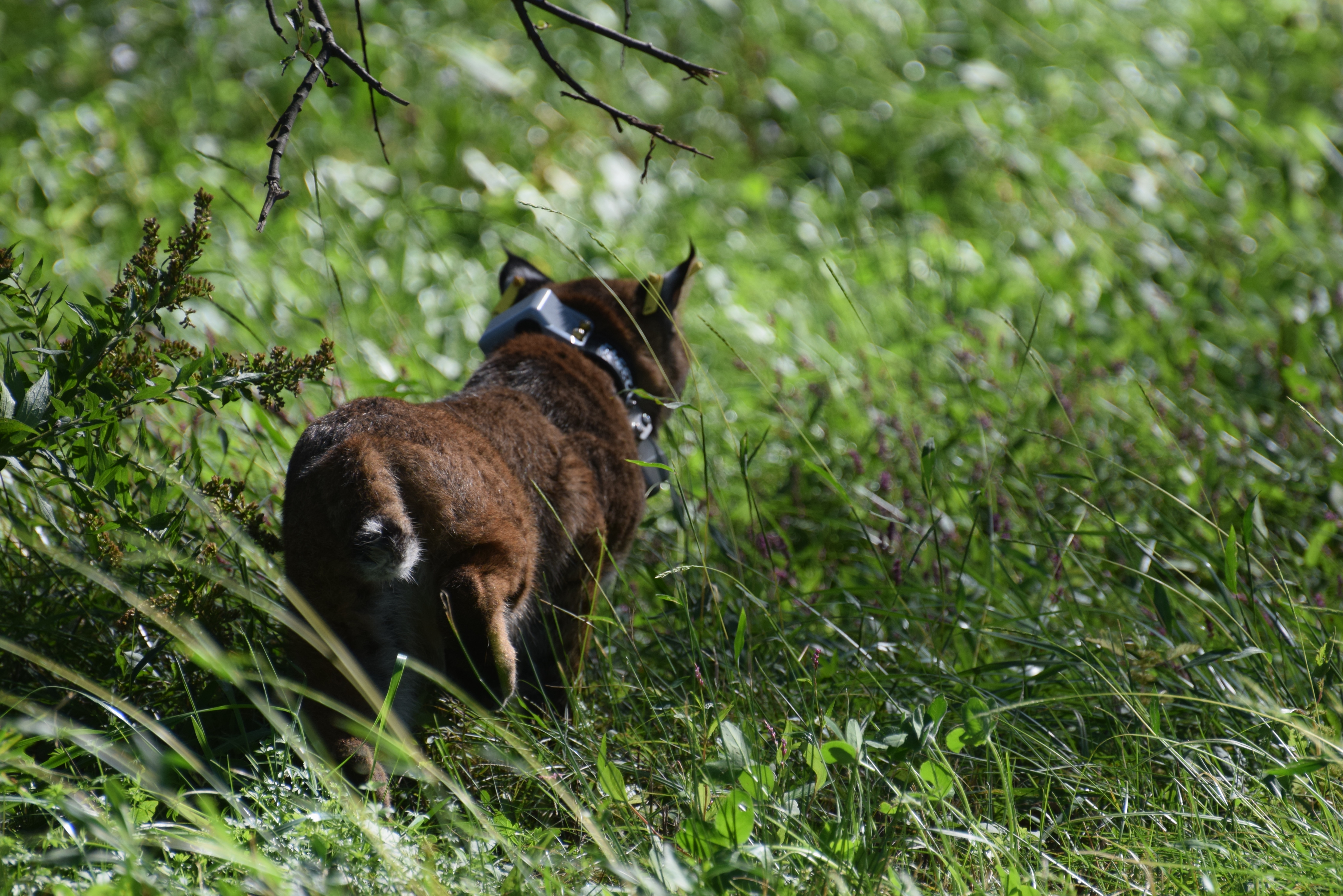 When recording a sighting, please provide the following information:

We greatly appreciate the time and effort of Connecticut residents to report their bobcat sightings. This study would not be possible without volunteer assistance.

View a map of current bobcat sightings in Connecticut.