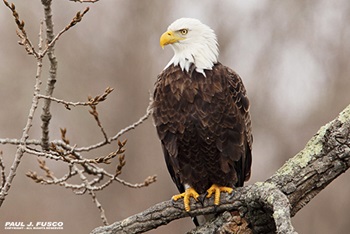 How You Can Help:

Stages of the Nesting Season 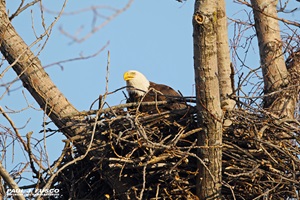 What happens: In this stage, eagle pairs are repairing and enlarging their nest. Nest construction, joint defense of the nesting territory, and mating all help strengthen the pair bond prior to egg laying.

When it happens: This behavior can carry on from December through March, but the peak of the season in Connecticut is late January and early February.

What to look for: Watch for eagles carrying sticks or clumps of grass. Also, watch for adult eagles soaring together and eagles mating.

Sensitivity: Very high; eagles at this point are trying to decide where to set up their nests for the next six months. Human disturbance can easily dissuade their nesting attempt.

What happens: In this stage, eagles lay and incubate one to three eggs. Two to four days pass between the laying of each egg, and incubation begins with the laying of the first egg. Incubation takes five weeks, during which the female keep them very warm by spending most of her time sitting on the eggs. She will turn the eggs every hour or so to ensure even development and temperature.

When it happens: In Connecticut, eggs are usually laid between the last week of February and first two weeks of March. Incubation continues until the eggs hatch.

What to look for: Once incubation begins, an eagle will be present at the nest at all times, though it is often difficult to tell because incubating eagles lay low on the nest. Often only the top of the head is visible above the rim of the nest. Watch for the male and female to trade places every few hours and for the female to stand up, move the eggs, and change position every hour or so.

Sensitivity: Very high; depending on the weather, eggs cannot be left uncovered for more than a few minutes, so disturbances that flush the adults from their nests can easily result in the death of the embryos. 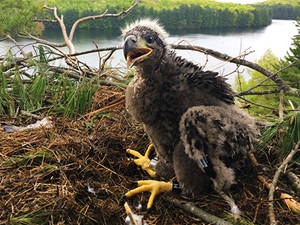 What happens: Once the eaglets hatch they require warmth and protection from the adults, who sit over the young until they are a few weeks old. When the first egg hatches, adults will begin to bring food to the nest and will continue to make regular food deliveries until the chicks are ready to fly. The parents will tear the food into small bits for the young chicks, and as the chicks grow older, they will learn to feed on their own.

When it happens: In Connecticut, hatching usually occurs around the beginning of April. Brooding will continue for three or four weeks after that, and feeding at the nest will continue until the young are ready to fly.

What to look for: When the chicks hatch, the attending adult’s posture will immediately change. Instead of laying low, they will sit up in the nest with their wings slightly drooped. This posture offers protection and warmth to the chicks at their feet. When adults feed their chicks they will bend over to rip food, then feed the chunks to the young. Sometimes, it is possible to distinguish between a single chick and multiple chicks by observing where the adult’s head moves as it feeds the young. The chicks grow quickly, and at three to four weeks should be visible above the rim of the nest.

Sensitivity: High to moderate; The chicks are very vulnerable when they are young and cannot be left alone for long, but as the weather improves and the chicks grow larger, they are less dependent on constant adult attention.

What happens: As the chicks grow their flight feathers, they will begin stretching and testing their wings. They build strength by jumping and flapping in the nest. Eventually, they move out onto the surrounding branches. At ten to twelve weeks after hatching, the chicks will take their first flight.

When it happens: In Connecticut, fledging usually takes place around the end of June or beginning of July.

What to look for: Jumping and flapping in the nest always precede fledging. “Branching,” or moving out to on nearby branches will also precede fledging. When the chicks first leaves the nest, they may crash to the ground. It may take many hours for them to figure out how to fly back up into the tree. While they are vulnerable to predators while on the ground, the adults will be nearby, keeping an eye on the situation.

Sensitivity: High; loud noises or disturbances may cause a chick to leave the nest before it is ready to fly.

This Used to Be Easy 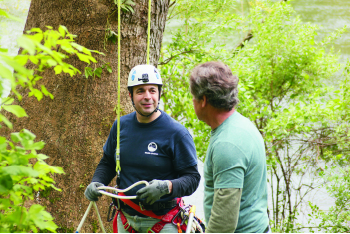 As Connecticut’s bald eagle numbers continue to grow, the task of monitoring bald eagles around the state continues to grow as well. The DEEP Wildlife Division has always relied on volunteers and reports from the public to help monitor nests around the state, and the results from 2019 underline the importance of the observations by citizen scientists in keeping tabs on these birds.

After the pesticide DDT caused massive declines in bald eagle populations across the continental United States, recovery began slowly. This slow pace was a result of the depth of the population decline, the delayed maturity of eagles, and their relatively slow reproductive rate. In Connecticut, the first post-DDT nesting territory was established in spring 1992, decades after the widespread use of DDT was prohibited in Connecticut in 1969 and nationally in the early 1970s. Many people spent countless hours monitoring the 1992 nest and following the progress of the two chicks that hatched.

By 1999, 20 years ago, only two nesting territories were active in the state. That season, neither pair was successful and no chicks were produced. 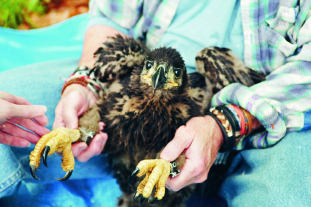 A decade later, the eagle population had begun to climb. In 2009, Connecticut had 19 territories, producing 31 chicks. By this point, the Wildlife Division had begun to rely on volunteers to help collect the data necessary to monitor the population. Nesting territories had radiated throughout the state, and more people were routinely seeing eagles.

In the past decade, the number of territories in Connecticut has more than tripled. Nesting eagles are widespread across the state and in every county and major watershed. Eagles commonly nest in suburban and urban areas. Managing information on a rapidly expanding population  is challenging, and without the dedicated observations of knowledgeable and passionate volunteers statewide, it would be virtually impossible. As the eagle population continues to grow, struggling with the number of nests to monitor is a wonderful problem to have. 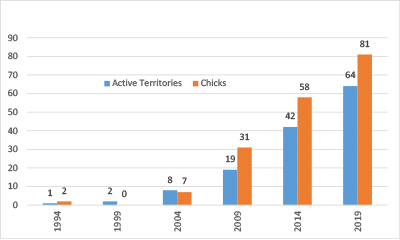 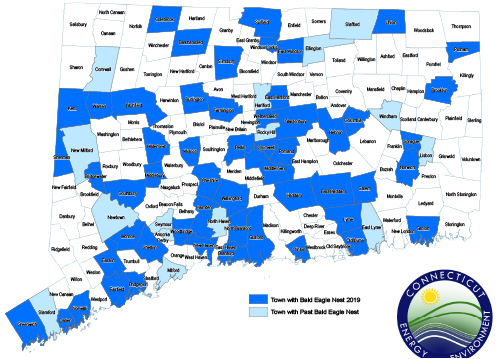