Although there are slight differences in habitat selection among these shrubland species, one thing remains the same - once the structure and species composition of the habitat change through forest succession, these habitat specialists disappear from the site. This disappearance happens within a decade after disturbance. If sites are not actively managed or new sites are not produced through disturbance or management, these birds will not have habitat for breeding.

It is not surprising, given the rate of decline of this habitat, that 80% of the total species that rely on shrubland habitat are experiencing a regional or national decline. New England populations of eastern towhee and brown thrasher have declined by over 90% since the 1960s. 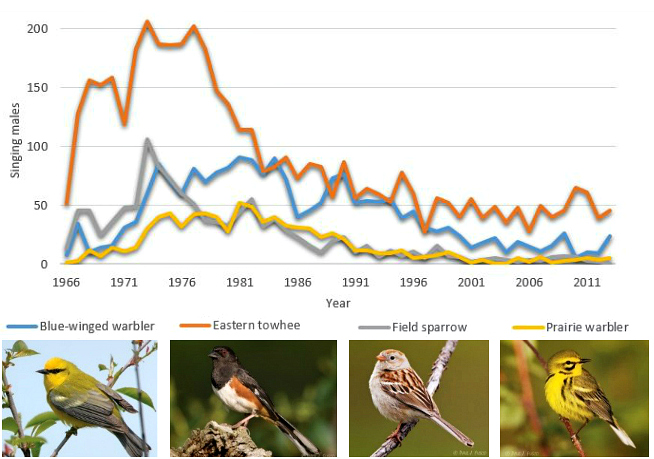 In 2010, the Wildlife Division initiated a project to monitor shrubland birds and their associated habitats. Four species of shrubland birds were selected as indicator species of these important habitats: blue-winged warblers, eastern towhees, field sparrows, and prairie warblers.

Staff and volunteers established a network of survey points on state properties containing shrubland habitat that was created either through forest cutting or wildlife habitat management practices. Forty survey points were located in state forests and 40 were located on wildlife management areas. At each point, data were collected on habitat structure and quality. Ten-minute point count surveys were conducted three times at each site during the breeding season.

Data were analyzed to determine the abundance of each of the four target species in lands managed through forest cuts and wildlife management openings. It was determined that state forests and wildlife management areas, combined with shrubland habitat found on utility right-of-ways, would support approximately 1,700 blue-winged warblers, 2,700 eastern towhees, 550 field sparrows, and 1,200 prairie warblers. These estimated populations represent less than 20% of the population goals set by Connecticut's Wildlife Action Plan for the prairie warbler and less than 10% for the blue-winged warbler, eastern towhee, and field sparrow. Therefore, active management of state lands needs to increase to help meet population goals. It also will be important to encourage partners and private landowners to assist with providing habitat for these birds.