Size: Up to six inches.

Pseudocardinal Teeth: Present. Two on the left valve and two or three on the right valve.
Nacre: Color white, bluish-white, or pink. Usually lighter in color and much thicker toward the anterior end. 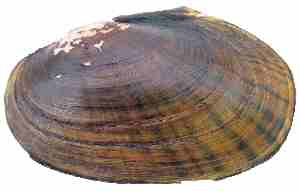 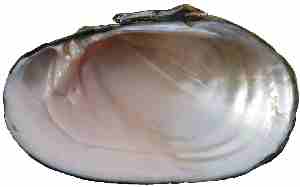 Habitat: The eastern lampmussel inhabits streams, rivers, ponds, and lakes, where it is usually quite common. It can be found in a variety of substrates but prefers sand and gravel.

Conservation: The eastern lampmussel is widespread and abundant throughout Connecticut, and is apparently tolerant of moderate habitat degradation and pollution. It is one of only four species in New England that is considered healthy and stable throughout its range.