Size: Up to seven inches.

Shape: Somewhat elongate, with a rounded ventral margin. The hinge ligament is usually straight. The valves are laterally inflated.

Periostracum: Color variable—may be yellowish, greenish, reddish, brown, or black, though most commonly yellowish-brown. Growth lines are prominent, and shell rays are often only evident in juveniles.

Pseudocardinal Teeth: Absent.
Nacre: Color usually white, pinkish, or a pale copper color. The ventral margin of each valve is noticeably thicker toward the anterior end [this is important for distinguishing this species from the eastern floater]. 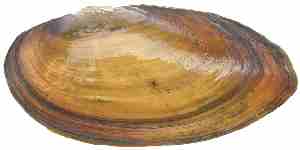 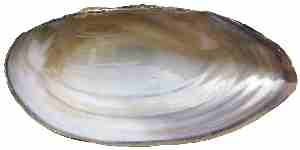 Habitat: The alewife floater is found in streams, rivers, ponds, and lakes that have runs of anadromous clupeids, particularly the alewife, Alosa pseudoharengus. It inhabits a variety of substrate types.

Range in Connecticut: The alewife floater exists in nearly all major watersheds in Connecticut but is confined to the upstream limits of its anadromous host fish.