Federal Funding for Fish and Wildlife

The Fisheries and Wildlife Divisions of the Department of Energy and Environmental Protection receive the majority of their funding through federal grants. Two grant programs, the Federal Aid in Wildlife Restoration and the Federal Aid in Sport Fish Restoration, have been particularly important. These programs were initiated by sportsmen and conservationists to provide states with funding for fish and wildlife management and research, habitat acquisition, and sportsmen education programs. Another important funding program is State Wildlife Grants, which is aimed at preventing wildlife from becoming endangered. 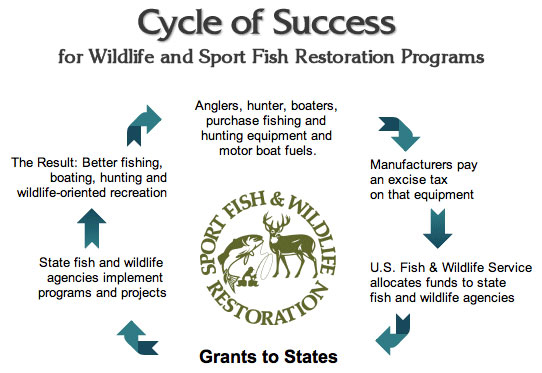 The Federal Aid in Wildlife Restoration Act, popularly know as the Pittman-Robertson Act, was approved by Congress on September 2, 1937, and began functioning July 1, 1938. The purpose of this Act was to provide funding for the restoration, rehabilitation, and improvement of wildlife habitat, wildlife management research, and the distribution of information produced by the projects. The Act was amended October 23, 1970, to include funding for hunter training programs and the development, operation, and maintenance of public target ranges.

Funds are derived from an 11 percent federal excise tax on sporting arms, ammunition, and archery equipment, and a 10 percent tax on handguns. These funds are collected from the manufacturers by the U.S. Department of the Treasury and are apportioned each year to the States and Territorial areas by the U.S. Department of the Interior on the basis of formulas set forth in the Act. Appropriate State agencies are the only entities eligible to receive grant funds. Funds for hunter education and target ranges are derived from one-half of the tax on handguns and archery equipment.

Each state's apportionment is determined by a formula which considers the total area of the state and the number of licensed hunters in the state. The program is a cost-reimbursement program, where the state covers the full amount of an approved project then applies for reimbursement through Federal Aid for up to 75 percent of the project expenses. The state must provide at least 25 percent of the project costs from a non-federal source.

This material was adapted from the U.S. Fish and Wildlife Service's Division of Federal Aid website (More information).

The Federal Aid in Sport Fish Restoration Act, commonly referred to as the Dingell-Johnson Act and passed on August 9, 1950, was modeled after the Pittman-Robertson Act to create a parallel program for management, conservation, and restoration of fishery resources. The Sport Fish Restoration program is funded by revenues collected from the manufacturers of fishing rods, reels, creels, lures, flies, and artificial baits, who pay an excise tax on these items to the U.S. Department of the Treasury. An amendment in 1984 (Wallop-Breaux Amendment) added new provisions to the Act by extending the excise tax to previously untaxed items of sport fishing equipment.

Appropriate State agencies are the only entities eligible to receive grant funds. Each State's share is based 60 percent on its licensed anglers and 40 percent on its land and water area. No State may receive more than 5 percent or less than 1 percent of each year's total apportionment. Puerto Rico receives 1 percent, and the Virgin Islands, Guam, American Samoa, Northern Mariana Islands, and the District of Columbia each receive one-third of 1 percent.

This material was adapted from the U.S. Fish and Wildlife Service's Division of Federal Aid website (More information).