Background: Connecticut is home to 7 species of woodpeckers that live in forests, woodlands, orchards, residential areas, and city parks throughout the state. An important part of the ecosystem, woodpeckers help control insect populations and create nest cavities that are used by other birds and mammals who cannot excavate the cavities themselves. Nuthatches, screech owls, kestrels, starlings, squirrels, flying squirrels, deer mice, and raccoons all use woodpecker tree cavities.

Woodpeckers are well adapted to maneuvering around tree trunks searching for insects and spiders. Their toes—two facing forward, two facing backward—enable woodpeckers to grasp vertical tree trunks and their stiff tail feathers provide an extra measure of support. With their sturdy beaks, woodpeckers can bore holes into trees for feeding and chisel out cavities for nesting. Strong muscles at the base of the beak act as shock absorbers to absorb the pressure from the force of impact. Bristles lining their nostrils filter out dust and tiny wood chips. To extract insects from crevices and holes in trees, woodpeckers have a long, sticky tongue with a barbed end with which they can snag insects.

In spring, males drum on trees (as well as on metal eaves and gutters, house siding, poles, and trash cans) to announce their territory and attract a mate. Most species mate for a single season and share much of the work associated with nesting, including excavating a nest cavity, incubating eggs, and feeding young. Generally, woodpeckers lay a single clutch of white eggs, although those in southern states may raise two to three broods in a season. Often the male incubates the eggs at night and the female sits on the nest during the day. The eggs hatch in about 2 weeks. The young are born blind and featherless (altricial). Their eyes open in about 2 weeks and the young are ready to fledge (leave the nest) in about a month. Often the young will stay with the adults in family groups until the end of summer or early fall.

While there is a great deal of habitat overlap among woodpecker species, there is relatively little competition for food and nesting resources as each species has its own niche. For example, downy and hairy woodpeckers occupy similar habitat but downy woodpeckers glean insects from bark crevices while hairy woodpeckers forage deeper into the tree trunk for wood-boring insects.

Habitat loss poses the greatest threat to woodpeckers. While many species have adapted to suburban backyards and urban parks, some, such as the pileated woodpecker, need large tracts of forests in which to breed. Developers often cull dead trees from wood lots leaving species, such as the state-endangered red-headed woodpecker, without the dead and decaying trees they need to nest and raise their young. In addition, developed areas often encourage the presence of starlings, non-native birds that invariably out-compete and displace woodpeckers for nesting sites.

Many of Connecticut’s woodpeckers are frequent visitors at backyard bird feeders where they feed on suet, sunflower seeds, and peanut butter. You can encourage woodpeckers by providing nesting habitat, supplemental food at feeders, and shelter.

Following are more details on the woodpecker species found in Connecticut. (A separate fact sheet on how to deal with woodpecker damage is also available). 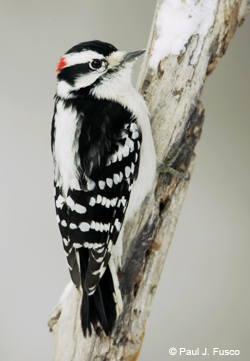 Description: Downy woodpeckers have black wings with white spotting and a white stripe down their back with a white underside. Males are larger than females and have a red patch on their nape which is missing in females. Both sexes have a conspicuous tuft of feathers (nasal bristles) above the bill.

Similar to the hairy woodpecker, downies are smaller (about 6 to 7 inches) and have a shorter bill. The yellow-bellied sapsucker, another similar-looking woodpecker, has white stripes on its wings, not on its back.

Habitat and Diet: Downy woodpeckers live in woodlands and orchards, often in suburban and residential areas. They feed on insects and their larvae and eggs that are primarily gleaned from bark crevices, as well as on berries, seeds, snails, and spiders.

Life History: Nests are in dead tree limbs 12 to 30 feet above the ground (although a range of 5 to 50 feet is possible). Four to 5 white eggs are incubated for approximately 12 days. The young leave the nest in about 24 days. Downy woodpeckers raise 1 brood per season, but birds in the south sometimes raise 2 broods.

Range: Downy woodpeckers are found throughout most of the United States (except in some parts of the southwest) and most of Canada.

Interesting Facts: The downy woodpecker is the smallest woodpecker in North America and the most common eastern woodpecker. 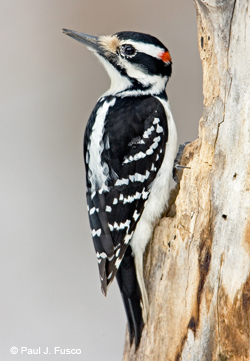 Life History: Hairy woodpeckers nest in live trees 5 to 30 or more feet above ground where they lay 3 to 6 white eggs. The eggs hatch in 11 to 15 days and the young fledge in about 28 days. Hairy woodpeckers raise 1 brood per year.

Range: The most widely distributed woodpeckers in North America are the hairy woodpecker and northern flicker. They are found throughout the United States and Canada and into Mexico. 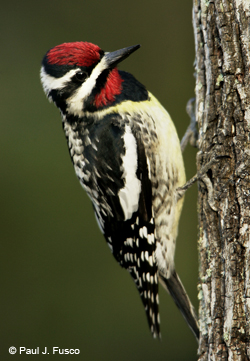 Description: The yellow-bellied sapsucker is a medium-sized woodpecker (7 to 9 inches). It has black wings with white barring on its back, a narrow longitudinal wing stripe, and a cream-colored underside with streaked markings. Both sexes have a black bib. Male sapsuckers have a red forehead and crown, as well as a red throat; females have a white throat. Juvenile sapsuckers are a mottled brown color and do not have the red crown, red throat, or black bib.

Habitat and Diet: Yellow-bellied sapsuckers prefer to live in forests, wood lots, and orchards. The birds feed on tree sap, insects, fruits, berries, and tree buds. They drill rows of regularly spaced vertical and horizontal holes in the trunk of a tree. When the sap leaks out, the sapsucker licks it up. Sometimes insects get stuck in the sweet sap and are eaten too. While sapsuckers feed primarily on sap throughout most of the year, they do switch to a diet of mostly insects during the breeding season when they need more protein.

Life History: Yellow-bellied sapsuckers prefer to nest in live trees, especially aspens. They nest 10 to 45 feet above the ground and lay a single brood of 5 to 6 white eggs. Incubation is 12 to 13 days and the young fledge in 25 to 29 days. Sap sucking is taught to the young by both sexes.

Range: The yellow-bellied sapsucker breeds in the Northeast and upper Midwestern United States, as well as in eastern, south central, and western Canada. One of only a few truly migrant woodpeckers, the yellow-bellied sapsucker heads south in winter where tree sap is still readily available. The sapsucker’s winter range includes the southeastern United States west to Texas and south to Panama and the Bahamas.

Interesting Facts: Sapsuckers drill in over 200 native tree species, but they have a strong preference for white birch, which has the highest sap sugar content.

Some mammals, such as red squirrels, porcupines, and bats, feed at sapsucker sap wells. 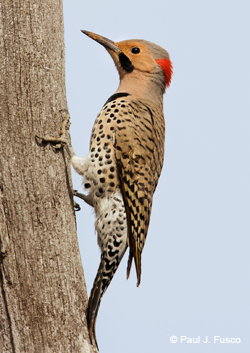 Description: Flickers are separated into two distinct groups. Both groups have a brown back and wings with black barring. The flicker is a medium to large-sized woodpecker (about 12 inches). It has a tan face and a buff to grayish underside with heavy black spotting. The yellow-shafted flicker, found in the eastern United States, is recognized by its yellow underwings and undertail, a red nape crescent with a gray crown, a gray or tan forehead, and a black mustache. The red-shafted flicker of the western United States has reddish underwings and undertail and a red mustache. The female yellow-shafted flicker lacks the black moustache.

Life History: Flickers nest in decaying trees or broken off trunks 2 to 90 feet above ground. They incubate 5 to 10 white eggs for 11 to 12 days. The young are ready to leave the nest in 4 weeks.

Interesting Facts: Flickers are often seen on the ground in open areas where they eat enormous quantities of ants. During an analysis of the stomach contents of a single flicker, 3,000 ants were found. 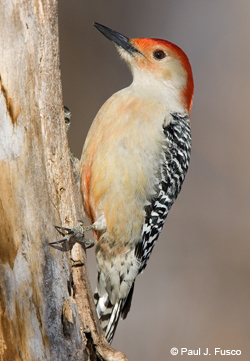 Description: The red-bellied woodpecker is medium to large-sized (9 inches). It has black and white barring on the wings and a pale, grayish tan underside. Males and females both have a red nape, but only the male has a red crown (females have a gray crown). Juveniles have a brown head with no red at all.

Life History: These birds nest 5 to 70 feet above ground, preferring dead trees or live trees with dead limbs. They lay 4 to 5 white eggs which hatch in 11 to 14 days. The young fledge in 24 to 26 days. While pairs in the south may have 2 to 3 broods, most raise 1 brood per year.

Interesting Facts: Red-bellied woodpeckers (and red-headed woodpeckers) store food away for the winter by hammering acorns, berries, and insects into bark and tree crevices to be eaten later. 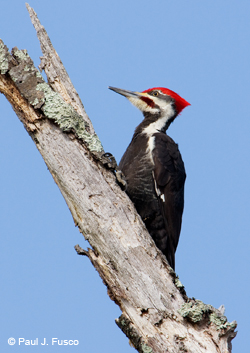 Description: The pileated woodpecker is the largest woodpecker found in Connecticut (16-19 inches). It has a solid black back and a conspicuous red crest extending from its forehead to its nape. Males are larger than females and they have a red forehead, red crest, and scarlet mustache. Females have the red crest but a black forehead and black mustache.

Habitat and Diet: Large tracts of deciduous or mixed forests are required for nesting but pileated woodpeckers may also be found in wooded parks. They eat carpenter ants, beetles and other insects, acorns, beechnuts, nuts, and fruits.

Life History: Nests are excavated 15 to 85 feet above ground in live trees. The woodpeckers lay a single brood of 3 to 8 white eggs. The eggs hatch in 15 to 18 days and the young are ready to fledge in 26 to 28 days.

Range: Pileated woodpeckers are found in the eastern United States from Maine to Florida, west to part of Texas, and north to Minnesota. They also occur in parts of the Pacific Northwest and California and into Canada where they are found from the eastern portion of Canada to the western provinces.

Interesting Facts: The pileated woodpecker makes an oblong-shaped hole for feeding and a round hole for nesting. 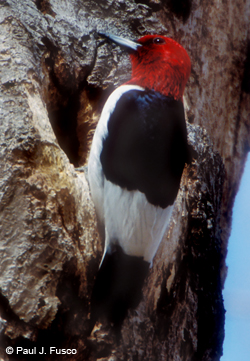 Description: The red-headed woodpecker is the only woodpecker in North America with an entirely red head and neck. The back is solid black and the underside is white. Distinctive white inner wing patches and a white rump are especially noticeable in flight. Males can be differentiated from females by the amount of red on their head. In males, the red crown extends over the nape; in females, red covers only the nape. Juveniles are brown and white with no red on their heads.

Life History: Nesting cavities are excavated in isolated snags at almost ground level up to over 80 feet above the ground. The woodpeckers also will use existing cavities for nesting. The 4 to 8 eggs are laid 1 per day on a bed of wood chips. Both adults excavate the cavity, incubate the eggs, feed the young, and defend the nest. The eggs hatch in approximately 14 days and the young birds leave the nest about 27 days later.

Range: Red-headed woodpeckers are found throughout the central and eastern United States, west to the Gulf coast of Texas and New Mexico and north to southern Canada. However, populations are sparsely distributed within this range.

Interesting Facts: The red-headed woodpecker is endangered in Connecticut and is considered one of the rarest breeding birds in the state. A decline in farming and the associated loss of open woodlots through forest succession have reduced the amount of suitable habitat needed by these woodpeckers. As with other woodpecker species, competition with starlings for nest cavities has also contributed to their decline.

Like red-bellied woodpeckers, red-headed woodpeckers store away food for winter by wedging acorns and insects into bark and tree crevices for later consumption.

Unlike other woodpecker species, red-headed woodpeckers will often catch flying insects rather than drill for insects.