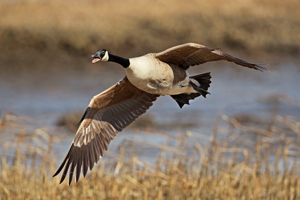 Background: The Canada goose was abundant in Connecticut during colonial times, principally as a migrant. Unregulated hunting and market hunting in the 1700s and 1800s caused a population decline. However, protective measures in the early 1900s gradually reversed this trend. Releases of geese by game breeders, sportsmen, private groups, and the State Board of Fisheries and Game resulted in an established population of resident geese that eventually spread throughout the state. Currently, Canada geese nest statewide, with the highest populations occurring in the 3 most urbanized counties (Fairfield, Hartford, and New Haven counties).

Canada goose numbers have increased substantially over the last 50 years. This increase is due to the ability of geese to adapt to man’s landscaping practices. The multitude of new ponds, lakeside lawns, golf courses, and athletic fields created since the 1950s have resulted in a large expansion of the goose population. These areas provide the right combination of water, cover, and grazing sites for geese.

Description: The Canada goose is Connecticut’s largest native waterfowl species, weighing between 6 and 13 pounds and measuring 22-48 inches. It is easily recognized by its black head, bill, and neck that contrast strikingly with a pale gray breast. The distinct white cheek patch, or chinstrap, that covers the throat is a characteristic field mark. The birds are gray-brown to dark brown on the back and wings and white on the belly; they have a black rump and tail feathers that are separated by a narrow but distinct band of white feathers.

Habitat and Diet: Canada geese are found in a variety of habitats that are located near water bodies, such as lakes, marshes, ponds, reservoirs, and rivers. Geese also are attracted to open grassy areas like lawns, parks, golf courses, athletic fields, and airports, as well as agricultural fields. These habitats provide ample food in the form of aquatic plants, seeds, clovers, cultivated grains, and lawn grass. When inland freshwater areas freeze in Connecticut, geese concentrate in the bays and inlets of Long Island Sound.

Life History: Canada geese are among Connecticut’s earliest spring nesters. They may start to defend territories in March and nest by early April. Yearling geese generally do not attempt to nest; about one-third of 2-year-old birds nest, as do most of the 3-year-olds. Canada geese are monogamous and pairs mate for life. They use a variety of nest sites, such as islands, man-made structures, muskrat and beaver lodges, and shoreline edges. Nest site requirements include proximity to water, cover for the nest, and good visibility for the incubating bird. Usually 4 to 7 white eggs are laid and incubated by the female while the male stands guard a short distance away. Incubation lasts about 28 days. Hatching occurs from April through June, with the peak occurring the first week of May. Nesting success and gosling survival are generally high. Most nest losses are caused by flooding, desertion, and predation. Egg predators include raccoons, skunks, foxes, coyotes, dogs, and gulls. Young goslings may be preyed upon by snapping turtles, gulls, owls, and coyotes.

Interesting Facts: Year-round resident geese that breed in the state are distinct from migratory populations that nest in the northern Canadian provinces. Most migrant geese that occur in Connecticut breed in Labrador, Newfoundland, and northern Quebec, arriving in Connecticut in early October. Migration continues through November with another peak number of migrants arriving in mid-December. Most migrant geese leave the state by mid-January to continue further south. However, in some years with mild winters, substantial numbers of migrant geese have remained in Connecticut the entire winter.

Flocks of geese travel in long lines, flying in V-formations. Their raucous honking can be heard for miles. The resonant calls from flocks of migrating geese have long been a welcome harbinger of autumn.

Resident geese sometimes serve as decoys, attracting migrant waterfowl. This can lead to crowded conditions and encourage the spread of diseases through the wild population. Further complicating the situation in Connecticut is the feeding of geese by the public. Geese and ducks that are fed nutritionally deficient food, such as bread, may be more susceptible to disease and malnutrition. Supplemental feeding of geese also creates unsanitary conditions and public safety issues at feeding areas. The DEEP Wildlife Division strongly discourages the supplemental feeding of geese and other waterfowl. Consult the Division's publication, Do Not Feed Waterfowl, to learn how you can help waterfowl by NOT feeding them.

Conservation and Management: All migratory game birds, including Canada geese, are managed by the U. S. Fish and Wildlife Service. Biologists manage the migrant and resident populations differently even though the two overlap during fall and winter and are indistinguishable in appearance. The migrant population is generally susceptible to high hunting pressure because of its long migration. The resident population receives too little hunting pressure. Special hunting seasons, timed to occur when migrants are not present in Connecticut, are used to direct hunting pressure toward resident geese. Regulated hunting is an effective management tool which can reduce nuisance problems. However, many nuisance goose problems occur in urban and suburban areas where hunting may not be a viable option.

Non-lethal techniques can be effective, particularly if several different methods are used in concert with each other and at the appropriate time. However, most of the available non-lethal methods, except for habitat modification, are transitory in their effectiveness. If habitat is not altered and human tolerance of nuisance geese does not change, some level of population reduction, together with non-lethal conditioning, is the only long-term, successful option. (More details are available on nuisance goose problems and management of agricultural damage.)

Reducing the number of breeding adults is the only way to achieve and maintain a population decline of resident Canada geese. There are a number of ways to remove adult geese, such as hunting, issuance of federal depredation permits, and round-ups. Connecticut has liberal goose hunting seasons and hunting has resulted in a decline of goose numbers and problems in areas where hunters have access to the birds. However, hunting is limited in urban areas, making it necessary to use other means to reduce adult survival.

Questions on how to deal specifically with nuisance goose problems is available by calling the Wildlife Division at 860-424-3011.

The Technical Assistance Informational Series is 75% funded by the Federal Aid to Wildlife Restoration - Pittman-Robertson (P-R) Program. The P-R Program provides funding through an excise tax on the sale of sporting firearms, ammunition, and archery equipment. The remaining 25% of the funding is matched by the Connecticut Wildlife Division. (rev. 4/19)