Assisting turtles in a proper manner helps ensure their survival

Connecticut’s Department of Energy and Environmental Protection (DEEP) is reminding residents to be on the lookout for turtles crossing roads. May through July is the nesting season for many turtles.At this time, egg-bearing females travel across land, and sometimes roads, to find the perfect location to dig a nest and lay eggs. Aquatic turtles also leave the water in search of terrestrial nesting sites.

“Connecticut’s landscape is highly fragmented by busy roads, and many turtles are forced to travel great distances – and across roadways – to find suitable nesting habitat,” said Jenny Dickson, Director of the DEEP Wildlife Division. “Helping a turtle move across the road can be the difference between life and death for the animal, and for future generations, but your safety comes first. Be sure to assist a turtle in the road only when it is safe to do so and do not attempt to stop traffic.”

“Research has shown that turtle populations across the United States have uncommonly high proportions of males because so many female turtles are being killed on roadways,”added Dickson.

Always keep the turtle pointed in the direction it is going. If you turn it around in the other direction, the turtle will only make another attempt to cross the road. Also, DO NOT move the turtle to a “better spot,” and DO NOT put terrestrial box turtles in a lake, pond, or other water body – leave the turtle in the same area where it was found once it is removed from the road. Turtles have a home range and females often return to the same general area to lay their eggs. Snapping turtles can be large, heavy, and feisty, so if you are unable to “shoo” them across the road, pick them up by the back of their shells above their legs and tail, NOT by their tail, to avoid a bite. Some people use a shovel, stick, or even car mats to push or skid snapping turtles across the road.

Turtles have a long lifespan, take a long time to reach sexual maturity, and have low survivorship when newly hatched. Because of these attributes, turtle populations cannot compensate for losses due to adult mortality without experiencing long-term consequences. With turtle populations requiring high levels of adult survivorship, every individual—especially the adult female—is important to a population’s stability. This concern is even greater in recent years because many U.S. turtle populations are becoming fragmented, isolated, and progressively smaller.

In your travels, if you encounter a turtle in the road, just remember this motto: “Give turtles a‘brake’ and help them cross if it is safe.” If you aware of a certain section of road in your area where a large number of turtles are crossing on a regular basis, please let the Wildlife Division know by sending an email, with location information, to deep.ctwildlife@ct.gov.

Do not be tempted to collect a turtle for any amount of time, including to keep as a pet. Turtles should be left in the wild.

"Removing individual turtles from the wild, including hatchlings, can have a huge impact on the local population," added Dickson. "Every individual is important to the population’s stability." Keep in mind that caring for a pet turtle is not as easy as you may think. Turtles require specific temperatures, diets, and lighting for digestion and shell health. Cages must be kept clean as turtles can carry salmonella.Plus, turtles live a long time – 50 to 100 years for an eastern box turtle (which is illegal to collect and possess in Connecticut).

Once the novelty of having a turtle as a pet wears off, the owner is faced with a decision of what to do with it. "Captive turtles, whether they were collected from the wild or bought at a pet store, should never be released to the wild," stressed Dickson. "Released turtles rarely survive, frequently introduce undetectable respiratory or other diseases to wild populations, and in the case of non-native species, may harm native turtle populations."

The best way to enjoy turtles is to watch them in their native habitat. Help keep wild turtles wild and leave them where you find them. Instead of collecting turtles, take photographs instead.

The CT DEEP Wildlife Division will be partnering with the U.S. Fish and Wildlife Service, Partners in Amphibian and Reptile Conservation (PARC), and the Association of Fish and Wildlife Agencies (AFWA) during Wild Turtle Week from May 23-27, 2022. Look for information and photographs on our Connecticut Fish and Wildlife Facebook page (www.facebook.com/CTFishandWildlife) or Instagram (https://www.instagram.com/ctfishandwildlife/). Share your photos of turtles with us!

Those interested in learning about Connecticut’s turtles can visit DEEP’s turtle webpage at https://portal.ct.gov/DEEP/Wildlife/Learn-About-Wildlife/Turtles-of-Connecticut. 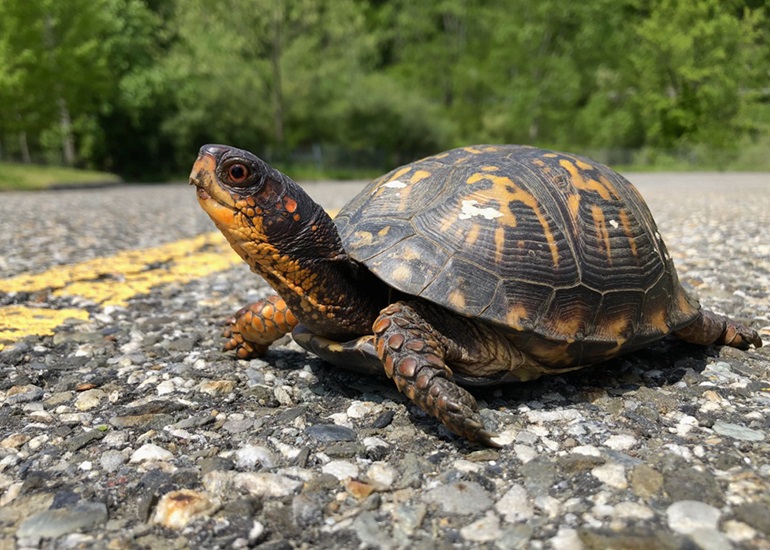 May through June is a critical period when turtles, like this box turtle, undertake risky overland forays to reach nesting areas or find mates. During this time, they oftentravel across roads, sometimes with fatal consequences. Be on the lookout for turtles crossing roads and give them a “brake!”