Participate in a Community Science Project for the CT DEEP!

(HARTFORD)—Connecticut’s Department of Energy and Environmental Protection (DEEP) asks residents to keep a tally of all sightings of hen turkeys, poults (young-of-the-year), and toms from now through August 31 as part of the Wildlife Division’s Annual Wild Turkey Brood Survey. Results from this survey allow DEEP biologists to determine turkey productivity and reproductive success by estimating the average number of turkey poults per hen statewide, assess annual fluctuations in the turkey population, and evaluate recruitment of new birds into the fall population.

Connecticut’s wild turkey population has been relatively stable in the past several years, but at a lower level than the peak population that occurred in the mid-2000s. Despite some declines, the state’s population remains healthy and productive.

To participate, volunteers can report observations of turkeys online or use a Wild Turkey Observation Form that can be downloaded from the Wildlife Division’s website. Both the form and the online reporting site can be found at https://portal.ct.gov/DEEP/Wildlife/Community-Science-Volunteer-Opportunities-CT-Wildlife-Division#TBS. Each observation is categorized by the total number of hens observed, total poults, and males (toms or jakes) observed. Those using the printed Wildlife Turkey Observation Form, instead of the online form, are asked to submit a final tally of results to the Wildlife Division by September 15th.

Hens are distinguished from toms by size, plumage, and head characteristics. Hens typically are smaller than toms (weighing in at about 8 to 10 pounds, whereas toms will exceed 15 pounds). Hens have feathering to the top of their head that generally is blue/gray in color, while toms have larger heads with prominent red, white, and blue coloration. A hen’s feathers appear light brown in color in contrast to the tom’s black and iridescent feathering.

“This is an excellent way to partner with the Wildlife Division to help better monitor the state's wild turkey population,” said DEEP Wildlife Division Biologist Will Cassidy. “Citizen involvement in this survey is a cost-effective means of gathering useful data. Participants should look carefully when counting turkey broods as the tiny, camouflaged poults may be difficult to spot in grasses and leaves. If you are unable to obtain an accurate count of the poults, please do not report the sighting.” 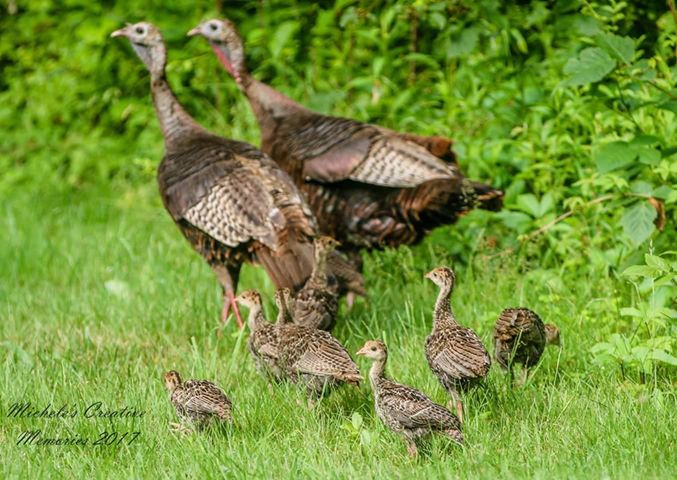 The DEEP Wildlife Division is asking residents to keep a tally of all sightings of hen turkeys and poults (young-of-the-year) from June 1 through August 31 as part of the Wildlife Division’s Annual Wild Turkey Brood Survey. Final results are then submitted to the Division to help with monitoring Connecticut’s wild turkey population.