(HARTFORD, CT) – Four members of the Connecticut Interstate Fire Crew, acting as an initial attack team, mobilized with an engine Friday morning from the Connecticut Department of Energy and Environmental Protection (DEEP)’s Eastern District Headquarters in Marlborough to fight wildfires in Texas.

The crew represents the latest personnel/resources sent from Connecticut to assist with national wildfire response. Connecticut crew members have also assisted in financial and medical roles for other national wildfire responses this year. Two of the crew members are full-time DEEP staff members, one is a DEEP seasonal staff member, and one works for the State of Rhode Island.

According to the Texas A & M Forest Service, as of today there are 10 active fires in Texas being managed under a full suppression strategy (Wildfires and Disasters | Current Situation TFS (tamu.edu).

“Connecticut’s Interstate Fire Crew is once again answering the call to help our fellow states, following a record number of deployments last year,” DEEP Commissioner Katie Dykes said. “I am so appreciative of our CIFC members, who take time out of their lives to serve others in challenging, often hazardous conditions. A huge thank you also to DEEP’s Forestry staff who coordinate CIFC deployments. I wish them safe travels, a safe and successful deployment, and a safe return.”

During the 16-18 day deployment, the crew that mobilized Friday from Connecticut will assist with initial attack, relief of other crews, and pre-positioning to get ahead of potential fires in Texas. They will be reporting to San Angelo, and once there will receive a more specific assignment.  Connecticut is sending a fire engine with this crew as Texas continues to experience unprecedented drought and extreme heat.

DEEP’s Forestry Division coordinates the Connecticut Interstate Fire Crew (CIFC), for which it maintains a roster of agency staff members and private individuals, many associated with local fire departments, who have been certified to fight forest or wildfires. Crew members must complete a rigorous training program and participate in an annual physical work capacity test and refresher training.

Connecticut maintains this firefighting capability to participate in a reciprocal aid program operated by the U.S. Forest Service. Under this program, trained personnel from other parts of the nation are available to assist Connecticut in the event of a fire emergency or other natural disaster in return for the support of Connecticut personnel when needed. All state agency expenses directly associated with these deployments are 100% reimbursed to the State by the U.S. Forest Service.

For more information about the CIFC, go here.

Wildfire risks exist here in Connecticut as well as in the Western U.S. with much of Connecticut currently in stage 2 drought. These deployments provide valuable opportunities for Connecticut based fire crews to gain experience that can be applied during Connecticut’s fire season which traditionally occurs during the early spring and the late summer/fall.  Residents are reminded to use caution and follow all  regulations when open burning. More information on steps residents can take to protect their property may be found at Forest Fire Prevention Tips (ct.gov) 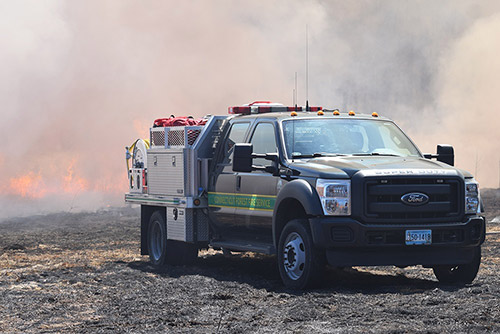 Engine 1418 is a Type 6 fire engine, equipped to carry 300 gallons of water, and part of a fleet of engines used by the Department of Energy & Environmental Protection for instate fire suppression, prescribed burns, and nationwide emergency response mobilizations like today’s mobilization to Texas.