(NEW HAVEN) – This month, the Connecticut Department of Energy and Environmental Protection, coordinating with federal, local, and commercial partners, facilitated the removal of two derelict barges posing a navigational and environmental threat to the waters and mariners around New Haven.

One of the barges was located adrift near the mouth of New Haven Harbor by the U.S. Coast Guard on Jan. 16, having broken free from the bulkhead at the abandoned English Station Power Plant on the Mill River. DEEP since worked closely with the Coast Guard, City of New Haven, CT Port Authority, marine contractors and others, and leveraged $150,000 in Supplemental Environmental Project (SEP) funds from a federal criminal case for violations of the Clean Water Act, to remove the abandoned barges and permanently eliminate the risks they posed.

Coast Guard Lt. Cmdr. Jennifer Sheehy described the risky situation presented by the 20 ft. by 30 ft. drifting barge this past winter, “We had one tanker entering the harbor and one leaving the weekend that the barge was spotted. The barge was a hazard to navigation; a tanker may have hit the barge, potentially damaging the hull and creating an oil spill. If the barge could not be secured, then the port may have been closed.”

A Coast Guard smallboat crew was able to secure a line to the barge from the breakwater at Lighthouse Point Park and attach a strobe light for visibility by local boaters. This temporarily mitigated the hazard and allowed for the port to remain open, but a final solution was needed.

The idea of returning the barge back to the southern end of Ball Island raised much concern. Lori Saliby, Assistant Director of DEEP’s Emergency Response and Spill Prevention Division, stated, “The risks are two-fold, navigation risk is one aspect while the other is environmental risk since damage to the bulkhead could result in the release of PCBs and other contaminants to the Mill River.”

The imminent threat to navigational safety caused by both barges to the Quinnipiac River, New Haven Harbor, and potentially Long Island Sound, and the potential release of contaminants to the environment at the Ball Island bulkhead qualified their removal and disposal to be paid for using SEP funds. The conditions in this case were subject to jurisdiction under the State’s Structures, Dredging & Fill Act, administered by DEEP’s Land & Water Division (LWRD).

SEP funds can be made available from a portion of penalties obtained through the resolution of environmental violations. The goal of any enforcement action is to bring the violator into compliance with the environmental requirements and to prevent harm to the environment and public health, as well as, assure that pollution and potential sources of pollution are properly remediated. SEP funds can support environmental projects that benefit Long Island Sound and Connecticut’s shoreline, and other projects aimed at preventing or reducing pollution, environmental restoration, or protection.

The specific SEP funds used to remove these barges were from the case of Sheffield Pharmaceuticals, LLC (Sheffield), where industrial wastewater was illegally discharged without a permit to the New London publicly owned treatment works, which is a serious violation. The case went to federal court in 2016 and resulted in a $1 million settlement, which required that a portion of the payments fund beneficial environmental projects in Coastal Connecticut.

Kevin Zawoy of DEEP’s LWRD Enforcement Section inspected the barges at both locations and coordinated with the Coast Guard, City of New Haven, CT Port Authority, marine contractors and other DEEP sections to determine the specific hazards to navigation and the environment and to determine if using a portion of the Sheffield settlement funds was the best answer to safely resolving the situation.

“Aside from the potential of contamination should the barge impair the bulkhead at English Station, we also originally feared that contaminants could be entering the Sound from both barges,” said Zawoy. Further inspection reduced concerns about contaminants, “But navigational concern still remained. The size, shape, and jagged edges had the potential to sink another boat.”

After extensive investigation and no owner of the barges identified, Zawoy began the process of obtaining the SEP funds and contracting out the barge removal and disposal work. Miller Marine Services was hired for the releasing and towing of the barges.

On July 6, both barges were brought to Blakeslee Arpaia Chapman, Inc.’s yard on the Quinnipiac River in New Haven where they were properly secured. Blakeslee Arpaia Chapman, Inc. is a heavy construction company that offers marine construction services. Blakeslee was hired to complete the second task. The barge sections are scheduled to be removed from the water by the end of this month using a large crane and then placed in their yard, where they will be cut up for scrap and recycled and disposed of.

“This is a great example of what the SEP funds are intended for,” said Zawoy. “Without the money DEEP receives from penalties, there would not have been the financial funding for this task and the navigational threat would remain. I think it’s important to note that the Department actually uses these funds to go back into the protection of the environment.”

“It was a really big win for all that day,” said Sheehy referring to DEEP securing the use of SEP funding. “We appreciate all the work put in to get funding and coordinate the removal of these abandoned barges and the risk they represented.” 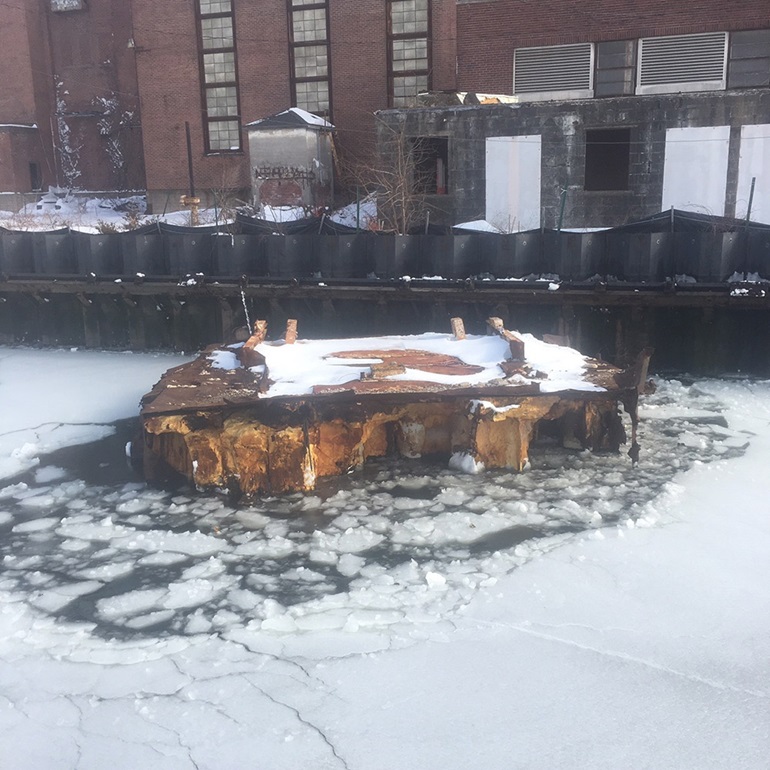 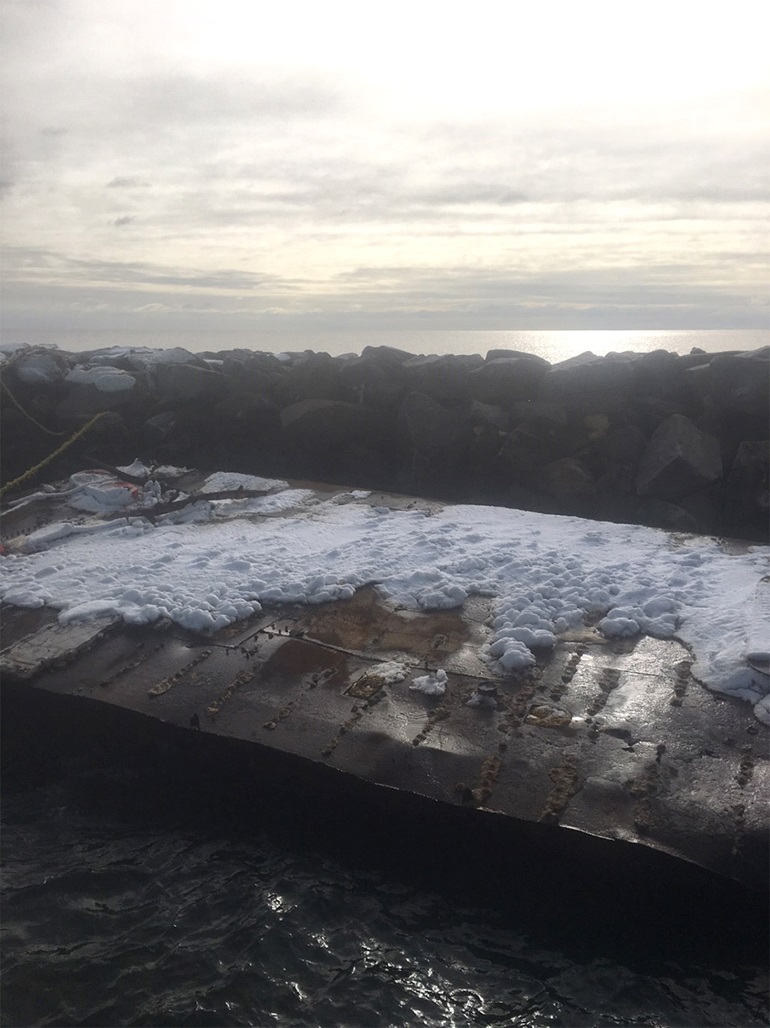 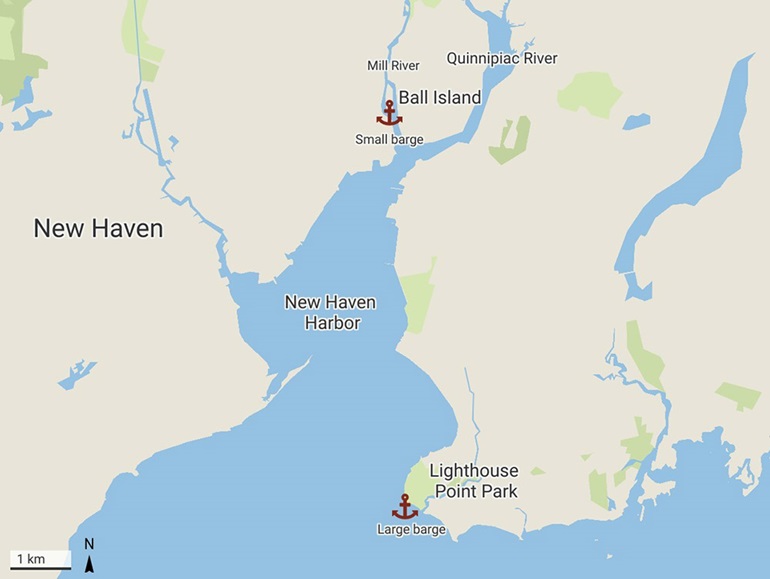 Map of New Haven Harbor showing the location of the two barges on January 16, 2021.