More great news to share this Earth Week as the National Oceanic & Atmospheric Administration (NOAA) recently announced its approval of a network of state-owned properties and coastal waters in Lyme, Old Lyme, and Groton to be the site of the state’s first National Estuarine Research Reserve (NERR).

The approval is the first major milestone in designating the area as the nation’s 30th such reserve. The National Estuarine Research Reserve System is a network of 29 coastal sites – including the Hudson River estuary in New York and Narraganset Bay in Rhode Island – designated to protect and study estuarine systems, the unique areas where rivers meet the sea.

The proposed location provides critical habitat for birds, fish, and other marine and coastal species of plants and animals in the region; designation of the area as an NERR will help provide valuable opportunities to advance relevant efforts in environmental science, monitoring, education, and stewardship.

“DEEP has been interested in establishing a NERR in Connecticut for quite some time, and this is a significant step in the process for all involved,” Brian Thompson, Director of DEEP’s Land and Water Resources Division, said. “We strongly believe this can help support current and future efforts to study, conserve, and enjoy these incredible places, which are vitally important for both ecological and human uses.”

“I am pleased that the designation process, led through an effective team approach, was and continues to be inclusive and transparent, with input from stakeholders,” remarked Sylvain De Guise, Director of Connecticut Sea Grant. “It is important that the benefits of a NERR designation be clearly understood and supported by relevant local and state entities as well as neighbors.”

Estuaries and their surrounding wetlands are found where rivers meet the sea. The resulting ‘brackish waters’ – which are saltier than rivers, but not as salty as the ocean – support a thriving ecosystem that is home to a variety of unique plants and animals.

“Estuaries are complex systems that are home to organisms critical to a manifold of ecosystem services, fisheries, and human health,” Dr. J. Evan Ward, Head of UConn’s Department of Marine Sciences, said.  “The CT NERR will allow for increased study and understanding of estuarine systems to ensure their long-term sustainability.”

The proposed Connecticut NERR has received support from state, local and private organizations, and community leaders who recognize the benefits of additional local and national research regarding our estuarine environments and the variety of important uses they support.

“The Connecticut Audubon Society is thrilled that the proposed National Estuarine Research Reserve has reached this important milestone,” said Patrick Comins, Executive Director of the Connecticut Audubon Society.  “The process has been quite inclusive, with a wide variety of non-profit, governmental and educational institutions and the public participating in the process to ensure broad support of the nomination.”

Established through the Coastal Zone Management Act, the National Estuarine Research Reserve System represents a partnership program between NOAA and the coastal states. NOAA provides funding and national guidance, and each site is managed on a daily basis by a lead state agency or university with input from local partners.  Designation of a site in Connecticut would provide access to a variety of resources including municipal trainings on coastal best management practices, K-12 programs to directly engage students and teachers in hands-on science, and expanded opportunities for environmental research.

“Connecticut has provided excellent partners for the designation process. We look forward to continuing this partnership as we work toward the establishment of a research reserve for this state,” remarked Erica Seiden, NOAA Manager of the National Estuarine Research Reserve System.

Designating a new site as a NERR is an involved process that can take years to complete. The acceptance of the nomination represents a significant milestone, but more work is required before a CT NERR can begin operation. Over the next 18 to 24 months, an Environmental Impact Statement (EIS) required by the National Environmental Protection Act (NEPA) must be completed, along with a Management Plan to outline how the CT NERR will operate.  Both the EIS and Management Planning steps will require input from stakeholders to ensure a successful outcome.

Once Connecticut has been officially designated by NOAA to host the nation’s 30th NERR, UConn has agreed to take on the overall management role as defined through the management planning process. Although situated within the university system, the CT NERR will also operate in close partnership with DEEP, continuing a long-standing tradition of environmental partnership between these two organizations.

To sign up to receive information on the upcoming EIS and Management Planning steps, join the DEEP NERR ListServ at https://www.ct.gov/deep/cwp/view.asp?a=2705&q=576332. 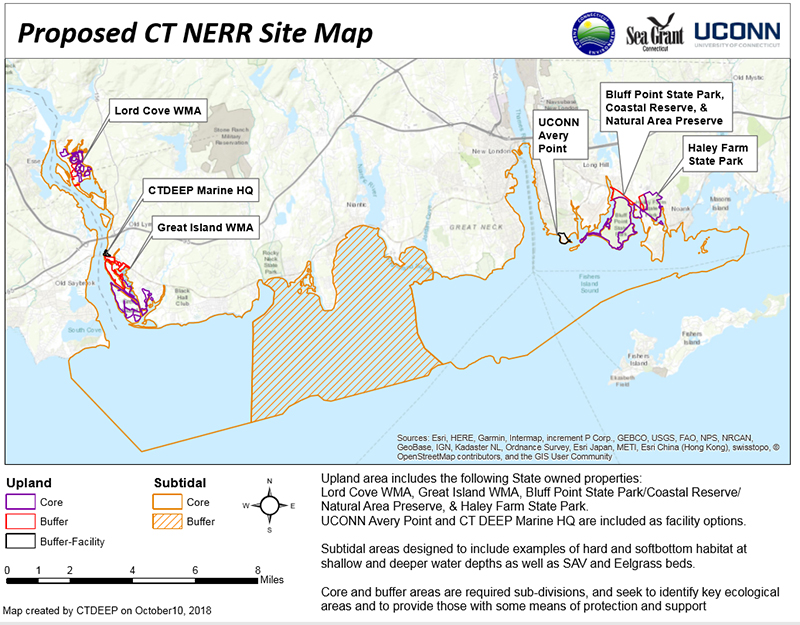 Above: A map of the proposed Connecticut National Estuarine and Research Reserve. 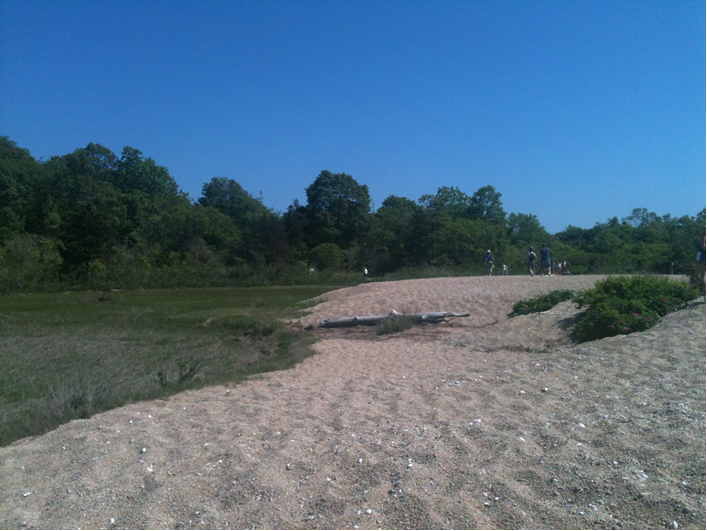 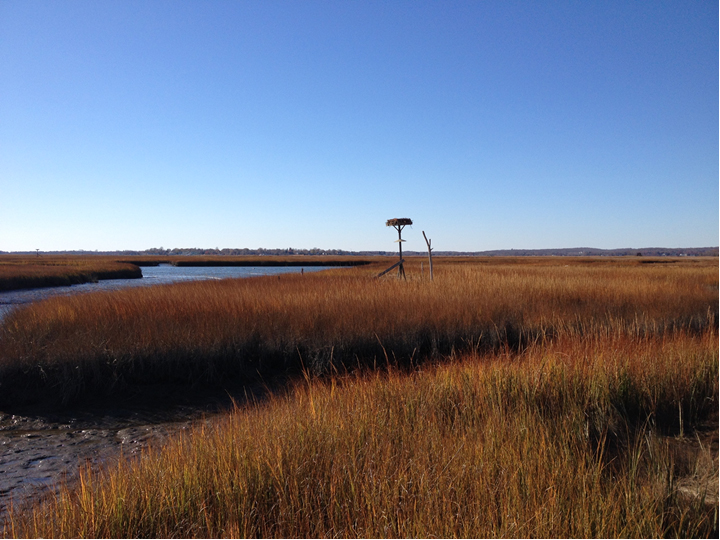 Above: The salt marsh, creeks, and tidal flats at the Great Island Wildlife Management Area in the lower Connecticut River.