Interactions with Black Bears on the Rise in Connecticut

DEEP Reports Unprecedented Number of Bears Entering Homes in 2020, Reminds Residents of Simple Things They Can Do to Minimize Habituation of Bears

Interactions between black bears and people are continuing their year-to-year rise, resulting in unprecedented numbers of complaints and requests for assistance, the Connecticut Department of Energy and Environmental Protection (DEEP) announced today.

Some of these interactions have been serious, including bears entering homes and gravely injuring both leashed and unleashed dogs. Already in 2020 (through July 8) DEEP has received more reports of bears entering homes (25) than in any previous year and we are on track to triple the average number of home entries of 2018 and 2019. The number of home entries reported this year in June alone (17) equaled those reported during all of 2019.

DEEP is reminding residents of several best practices they can incorporate to help reduce the likelihood of an encounter with a bear.  These practices, along with additional information, are available on DEEP’s “Living with Black Bears” website: https://portal.ct.gov/DEEP/Wildlife/Nuisance-Wildlife/Living-with-Black-Bears

Black bears that access and consume human-associated food (e.g. birdseed, trash, pet food) on a regular basis become habituated (comfortable around people) and food-conditioned (associate humans with food). As the bear population continues to grow and expand its range, and bears become increasingly food conditioned, conflicts with humans will continue to increase, and food-conditioned bears pose a greater risk to public safety and often cause more property damage to houses, cars, pets, and livestock.

“Black bears should never be fed – either intentionally or unintentionally,” said Jenny Dickson, DEEP Wildlife Division Director. “Bears that are attracted to homes by easily-accessible foods lose their fear of humans. Such bears spend more time in neighborhoods and near people, increasing risks to public safety, the likelihood of property damage, and the possibility that the bears may be hit and killed by vehicles.”

If you encounter a bear while in your yard or hiking, make your presence known by yelling or making other loud noises. Never attempt to get closer to a bear. If a bear does not retreat, slowly leave the area.  If in your yard, go into your house, garage or other structure. If the bear persistently approaches, go on the offensive, shout, wave your arms, and throw sticks or rocks. If your dog is hiking with you, it is imperative that you keep the dog on a SHORT leash and DO NOT let it roam free – this is for the safety of your dog, yourself, and the bear.

In the rare instance when a bear appears to be aggressive toward people, residents should immediately contact DEEP’s 24-hour dispatch line at 860-424-3333.

Bear sightings reported by the public provide valuable information to assist the DEEP in monitoring changes in the black bear population. Anyone who observes a black bear in Connecticut is encouraged to report the sighting on DEEP’s website at https://portal.ct.gov/DEEP/Wildlife/Nuisance-Wildlife/Living-with-Black-Bears or call the Wildlife Division at 860-424-3011. Information on the presence or absence of ear tags, including tag color and numbers, is particularly valuable. A common misconception is that a tagged bear is a problem bear, and a bear with two ear tags was caught on two different occasions because it was causing problems. Actually, every bear receives two ear tags (one in each ear) the first time it is handled by DEEP. Most tagged bears have not been caught as problem bears, but rather as part of a project researching the state’s population.

Another tool available to municipalities to help avoid conflicts between humans and bears is to adopt ordinances prohibiting the feeding of black bears. The towns of Hartland, Colebrook, and Barkhamsted have already adopted such ordinances. DEEP supports adoption of such ordinances and will be initiating outreach to municipal leaders to share information about the development, execution, and effects of these ordinances.

The below graph provides a comparison of this year’s home entry by bears compared to last for the same period.  Also, a localized and filterable mapping tool of reported bear sightings is available through DEEP’s website at https://ctdeep.maps.arcgis.com/apps/webappviewer/index.html?id=924a7664caac4b9ba54512233b7d5495. 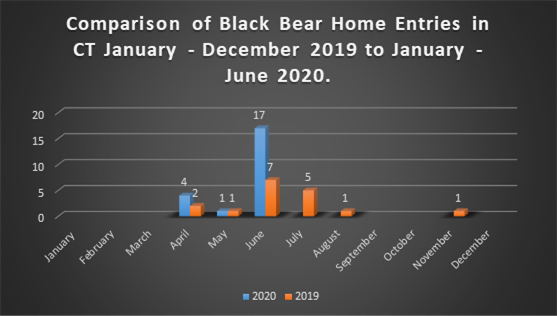