As Halloween approaches, images of bats are everywhere -- from holiday decorations to super hero costumes and haunted house tours. Unfortunately, in recent years, bats have received far more tricks than treats.
In roughly a decade, the disease known as white-nose syndrome (WNS) has killed millions of bats throughout the Northeast and in Connecticut, having spread to 33 states and seven Canadian provinces. The threat posed to our ecosystem and our economy is no Halloween prank, it is one of the most serious conservation challenges we face.
The species affected by WNS are known as “cave bats.” In Connecticut, they include the little brown, northern long-eared, tri-colored, big brown, eastern small-footed, and Indiana bats. All of these species, except the big brown bat, are now listed as endangered under the Connecticut Endangered Species Act.
In 2015, as a direct consequence of WNS, the U.S. Fish and Wildlife Service listed the northern long-eared bat as a threatened species under the federal Endangered Species Act. This species, once common in Connecticut and the Northeast, is now considered to be at risk of becoming endangered in the foreseeable future. Meanwhile, biologists and researchers in the United States and Canada are racing to determine whether there are safe and effective ways to treat or control the fungus that causes WNS. Many of these efforts have been supported by the State Wildlife Grant program, a critical source of funding for addressing urgent wildlife disease issues. Since 2007, the DEEP has been an active participant in WNS response. Biologists continue to monitor for signs of WNS in bats and document mortality, survivorship, and reproductive success. More information on white-nose syndrome and related conservation efforts can be viewed at https://www.whitenosesyndrome.org/.
“Halloween is great time to dispel myths about bats,” said Jenny Dickson, a Supervising Wildlife Biologist for the Department of Energy and Environmental Protection (DEEP) Wildlife Division. “Rather than harbingers of doom, bats are crucial for healthy ecosystems and provide tremendous economic benefits to agriculture and forestry by controlling insects.”
Here are a few interesting facts about bats:
“Learning more about bats and the important role they play in healthy ecosystems would be a great Halloween ‘treat’ for this troubled and misunderstood group of animals,” added Dickson. “Knowing why bats matter is an important part of efforts to halt the devastation caused by white-nose syndrome.”
Want to learn more about bats? Check out DEEP’s Connecticut Fish and Wildlife Facebook page (www.facebook.com/CTFishandWildlife) for interesting facts, photos, and videos about bats. You can also make a difference by celebrating Bat Week (October 24-31, 2018; www.batweek.org) and helping spread the word about the importance of bats.
As cooler weather approaches and bats settle down to hibernate, the DEEP encourages Connecticut residents to help in monitoring WNS by reporting bats observed outdoors during winter. While the characteristic white fungal growth may not be readily visible on a bat’s nose, bats observed outside between mid-November and March are a sign that WNS may be at work. Details about what you observed, including the date, location, and digital photos if possible, may be submitted to the DEEP Wildlife Division at deep.batprogram@ct.gov or by calling the Wildlife Division at 860-424-3011. 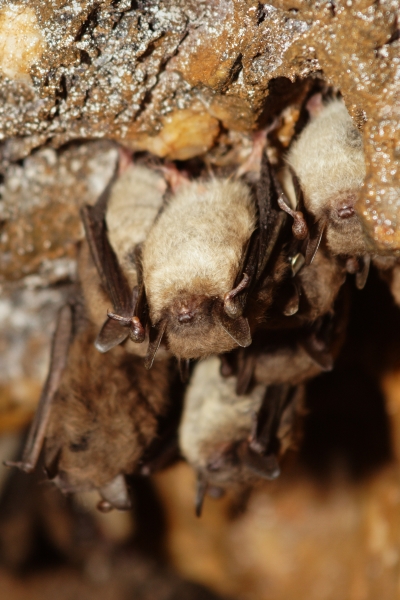 Photo Credit: Paul J. Fusco / CT DEEP-Wildlife
Several species of bats that call Connecticut home have been devastated by white-nose syndrome, so much so that in 2015 three species were listed as endangered on Connecticut’s List of Endangered, Threatened and Special Concern Species. These species are the little brown bat (pictured), northern long-eared bat (also federally threatened), and the tri-colored bat. The eastern small-footed bat was also up-listed from special concern to endangered. Although the Indiana bat also suffers from WNS, it was listed in 1967 as federally endangered for reasons unrelated to WNS.