Connecticut’s Department of Energy and Environmental Protection (DEEP) today announced that Charles Island in Milford and Duck Island in Westbrook will be closed to the public from now through September 9, 2018, to prevent disturbances to nesting birds. Both islands have been designated by DEEP as Natural Area Preserves, primarily due to their importance as nesting habitats for several state-listed birds, including snowy egrets and great egrets (state threatened species), glossy ibis, and little blue herons (state special concern). The two islands also have been designated as Important Bird Areas by Audubon Connecticut.
In addition, the DEEP is asking beachcombers, sunbathers, and boaters along the Connecticut shoreline to respect the fencing and yellow signs warning of piping plover and least tern nesting sites. The piping plover, a small, sandy-colored shorebird about the size of a sparrow, is a threatened species under the federal Endangered Species Act, as well as a state threatened species in Connecticut. The small, gull-like least tern, which nests in colonies in the same beach habitat as the piping plover, also is a state threatened species.
“Each year, Charles and Duck Islands are closed during the nesting season to protect various bird species. Fencing also is erected at beach nesting areas along Connecticut’s shoreline to safeguard piping plovers and least terns,” said Susan Whalen, DEEP Deputy Commissioner. “Closing the islands and enlisting the public’s help and cooperation are simple but effective ways to protect these birds.”
Background: Closing of Charles and Duck Islands
Protecting heron and egret nesting areas on Charles and Duck Islands are important steps to prevent disturbances that can result in abandonment of the nests and possibly of the entire colony. This would have a tremendous negative effect on these declining bird populations.
To protect the nesting colonies (also known as rookeries) on Charles and Duck Islands, educational signs have been erected at access points describing these rare birds and why they should not be disturbed. Additionally, the sites are posted with island closure notices; the rookeries are fenced; and signs are posted that read “Do Not Enter – Bird Nesting Area.”
When young birds become agitated by disturbances, they often fall from the nest. Once grounded, the young birds die of starvation or predation. If disturbances continue, the adults may abandon the nesting area. Examples of disturbances to these rookeries include unleashed dogs, boat and kayak landings, people approaching fenced nesting areas, camp-outs, and bonfires.
Signs stating the closure of Charles and Duck Islands are posted and DEEP Environmental Conservation Police Officers will be patrolling the islands. The entire island areas are completely closed. Landing of watercraft on the beaches is prohibited. The public can help to protect nesting birds by following the closure and reporting any observed violations by calling DEEP’s 24-hour Dispatch Center at 860-424-3333.
Background: Protection of Piping Plovers and Least Terns
Human disturbance at beach nesting areas may result in nest abandonment by state threatened piping plovers and least terns or the loss of eggs and chicks. In response, each year DEEP delineates nesting sites with rope and fencing to dissuade people from disturbing the birds and nests.
These shorebirds need special protection throughout their April to August nesting season and especially during the increased beach activity over the long Memorial Day and Fourth-of-July weekends. By obeying the warning signs and staying away from fenced areas, beach visitors can avoid disturbing the nesting birds.
Both piping plovers and least terns use a shallow depression in sand for a nest. Their sand-colored eggs and young are so well camouflaged that they are easily stepped on. When intruders approach, young piping plovers are likely to stand motionless while the adult tries to attract attention by pretending to have a broken wing or flying around the intruder. If you witness this behavior, DEEP advises you to move away from the area at once.
The DEEP Wildlife Division also provides the following advice to protect nesting shorebirds:
It is illegal to hold wildlife for rehabilitation without proper state or federal permits. In addition, shorebirds have a unique diet that people would find hard to duplicate, probably resulting in starvation of the young bird. Any violations affecting wildlife should be reported to the DEEP’s 24-hour, toll-free hot line: 1-800-842-HELP.
Photos Attached: Credit Paul J. Fusco/DEEP-Wildlife Division 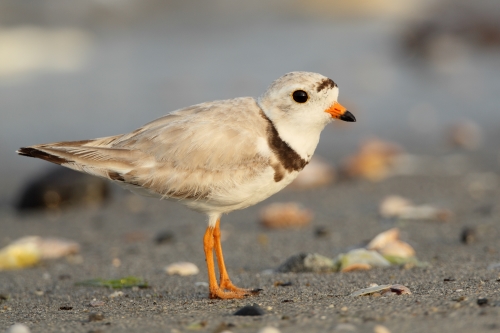 Piping Plover – Piping plovers need special protection throughout their nesting season and especially during the increased beach activity over the long Memorial Day weekend. By obeying the posted signs and staying away from fenced areas, beach visitors can avoid disturbing the nesting birds. 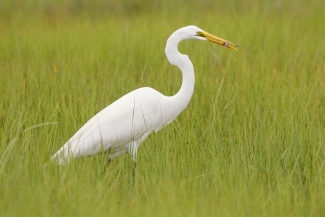 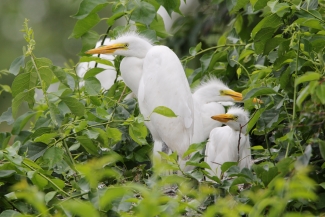