EPA first set standards for nitrogen dioxide (NO2) in 1971, setting both a primary standard (to protect health) and a secondary standard (to protect the public welfare) at 53 parts per billion (ppb), averaged annually.  The following figure shows the decrease in annual design value NO2 levels since 1983, well below the annual National Ambient Air Quality Standard (NAAQS) of 53 ppb. 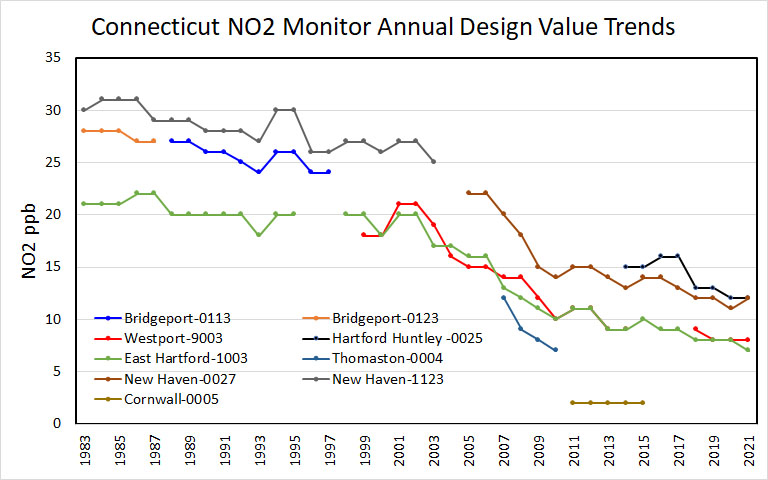 Please select for a larger view of the NO2 Plot

On January 22, 2010, EPA strengthened the NAAQS for NO2 by setting a new 1-hour NO2 standard at the level of 100 ppb.  It will protect against adverse health effects associated with short-term exposure to NO2, including respiratory effects that can result in admission to a hospital. The form for the 1-hour NO2 standard, is the 3-year average of the 98th percentile of the annual distribution of daily maximum 1-hour average concentrations.  This new NAAQS will require near-road monitoring, which will commence in January 2013.  The three years of data required for design value calculations and subsequent attainment/nonattainment determinations will not be available until after 2015.  In the interim, Governor Rell sent EPA a December 17, 2010 letter, recommending that EPA designate all of Connecticut as “unclassifiable” under CAA Section 107(d)(1).  EPA responded with a letter dated January 20, 2012, which designated Connecticut as “unclassifiable” for NO2.  The following figure shows the newly calculated 1-hour NO2 design values for monitoring sites since 1983.  It shows a general decrease in the 1-hour design values, well below the new 1-hour NAAQS of 100 ppb. 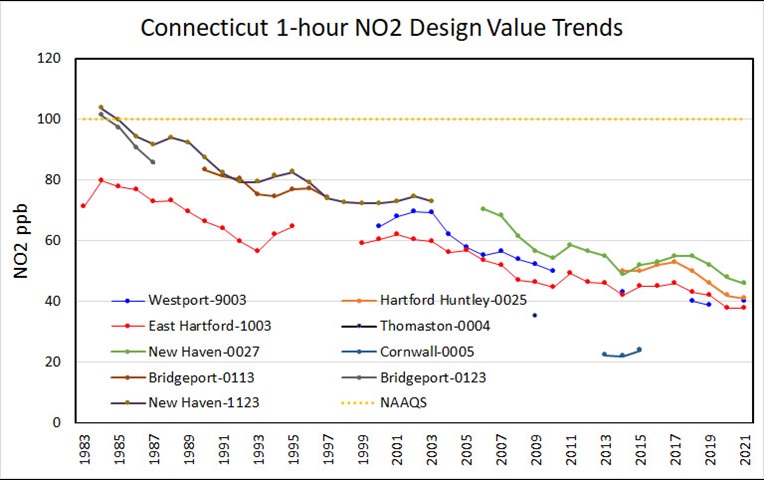 Please select for a larger view of the NO2 Plot