Air quality trends are used to assess if the air quality is improving and thereby determine if control and abatement strategies are effective. 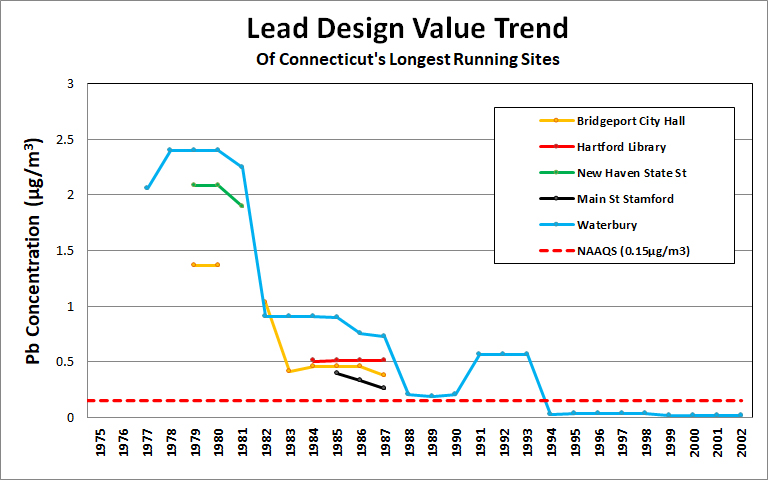 Please select for a larger view of the Lead plot

The above figure illustrates the historic downward trend in lead levels measured in Connecticut, as compared to the National Ambient Air Quality Standard (NAAQS).  In November 2008, the EPA finalized a tighter lead NAAQS of 0.15 µg/m3 to better protect public health.  The previous lead NAAQS of 1.5 µg/m3 was set in 1978.

The 1978 federal standard was last exceeded in 1980 as airborne lead levels declined dramatically due to the federally mandated phase-out of lead additives in on-road gasoline (described below).  Total suspended particulate (TSP) lead monitoring was discontinued in Connecticut in 2002 after measurements consistently showed concentrations significantly less than the 1978 NAAQS. Monitoring of lead in PM10 was conducted from 2010 through 2015 under the 2008 NAAQS requirements, which indicated a maximum design value at 27 percent of the federal standard..

The significant decrease in ambient lead levels since the late 1970’s is the result of a federal EPA program, initiated in 1973, to phase out the use of lead in gasoline.  Marked decreases in monitored lead levels tracked the timeline of the lead reduction standards program.  These standards required gasoline to average no more than 0.5 grams of lead per gallon by 1982 and no more than 0.1 gram of lead per gallon by 1986 (compared to pre-regulatory levels of 2-3 grams per gallon).  By 1995 leaded fuel sales accounted for only 0.6% of fuel sales nationally. All leaded fuel sales were then banned for all on-road vehicles on January 1, 1996.  Current efforts to ensure that public exposure to lead is minimized are being focused on lead-based paints and non-road vehicles (indirectly though PM controls).