Air quality trends are used to assess if the air quality is improving and thereby determine if control and abatement strategies are effective. These air quality plots below show the relative trends over time and are updated on a yearly basis. Ozone • PM2.5 • Carbon Monoxide • Nitrogen Dioxide • Sulfur Dioxide • Lead 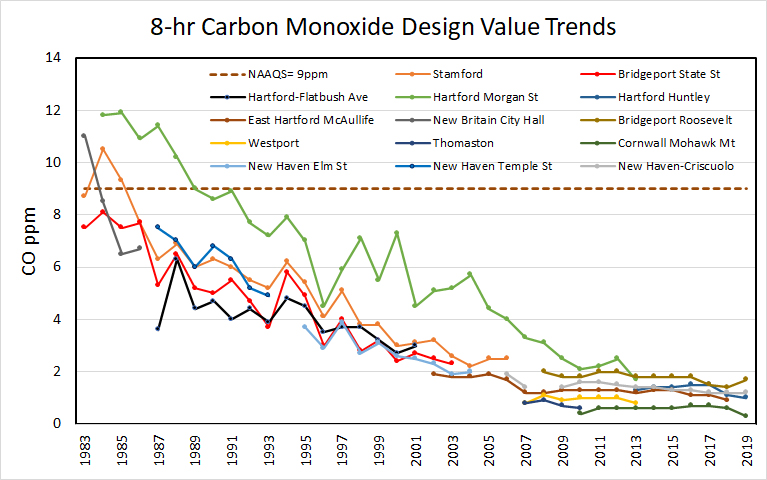 Please select for a larger view of the CO plot.

The above figure shows the decreasing trend in maximum CO levels and is compared to the federal National Ambient Air Quality Standard (NAAQS). Historically, the highest levels were originally observed in Stamford in the late 1970's. Stamford recorded a spike in CO levels in 1977, due to a change in the location of the monitor in Stamford. After 1977, reductions in CO levels was attributed to reductions in traffic congestion in downtown Stamford following implementation of various traffic flow improvements. No violations of the CO standard have been measured anywhere in Connecticut since the late 1980's.

The improvements are due to the pollution reduction strategies implemented on the state and federal levels. These strategies include progressively more stringent federal emission standards for new motor vehicles and the introduction of cleaner gasoline in the mid 1990's. A major contributor to the decreased CO levels was Connecticut's adoption of inspection and maintenance program for motor vehicles in 1983, as can be observed in the above chart.