We know many Connecticut businesses are struggling as they deal with the effects of COVID-19. We appreciate their perseverance and know they share our commitment to keeping our residents healthy. The state, working with its federal partners, has several programs and initiatives in place to assist businesses during this difficult period. For specific questions related to small business, email the Joint Information Center at COVID19.JIC@ct.gov, or call the DECD small business hotline at 860-500-2333. Individuals can call 2-1-1 for more information. 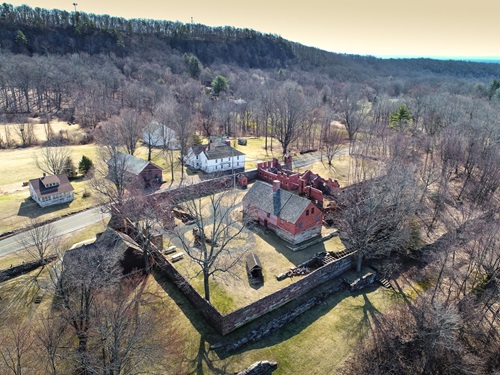 To support the effort to contain the spread of COVID-19, Old New-Gate Prison & Copper Mine is closed until further notice. We will keep you informed as plans evolve.

Established in 1705, Old New-Gate Prison & Copper Mine is the site of the first operating copper mine in the North American Colonies. The mine had little success, and by the 1750s all mining activity had ceased. In 1773, the colony of Connecticut acquired the copper mine to be used as a workhouse and prison for convicted criminals, including British Loyalists. The State of Connecticut abandoned New-Gate Prison in 1827 because it was considered inhumane and costly to run. The property became a popular tourist destination during the early to mid-20th century after mining attempts had again failed in the mid-19th century. In 1968 the State of Connecticut re-acquired Old New-Gate Prison & Copper Mine to be operated as a prison museum. Today, Old New-Gate Prison & Copper Mine is listed as a National Historic Landmark and State Archaeological Preserve. The museum strives to engage with historic and contemporary issues through exploration and discovery of the site as a copper mine, prison, and tourist attraction.

Take an aerial tour of Old New-Gate Prison & Copper Mine

Take a virtual tour of the copper mine

Schedule photography, filming, or other special events at the museum