In 2020, the number of active territories and bald eagle chicks was the highest observed over the last 25 years, and likely much longer.

The population of bald eagles is included as an indicator because the eagle is representative of species, which require large areas of relatively undisturbed land near rivers or lakes where the birds can find adequate supplies of fish and other prey that are – very importantly – only minimally contaminated. Iced-over rivers to the north can push more eagles south to Connecticut. The eagles spend their winter mostly along larger rivers where they have become a regular sight. The federal government removed the bald eagle from its list of threatened and endangered species in 2007. In 2010, Connecticut changed the eagle's in-state status from endangered to threatened.

Goal: Territories are resource areas used by eagles that have only one active nest. The goal for bald eagles is derived from the 1983 Northern States Bald Eagle Recovery Plan, prepared by the United States Fish and Wildlife Service (USFWS). The Plan established a goal of 20 breeding birds (10 nests) for Connecticut. According to experts in the Bald Eagle Study Group, Connecticut could eventually host up to 200 nesting eagles (100 nests).

In 2020, Connecticut’s mid-winter survey recorded 181 eagles throughout the State.46   Since 1979, observations of eagles (nesting and not) during the Midwinter Eagle Survey have increased over 500 percent.47

In 1967 bald eagles south of the 40th parallel were listed by the Secretary under the Endangered Species Preservation Act of 1966. The banning of DDT by the U.S. EPA in 1972 and conservation efforts (captive breeding programs, reintroduction efforts, law enforcement, and nest site protection during the breeding season) by federal, state and private organizations resulted a remarkable population rebound to the point that bald eagles no longer need the protection of the Endangered Species Act.48

Osprey: Another large fish-eating bird of prey, the osprey, has rebounded in similar fashion to the eagle. From a low of nine nesting pairs in 1974, ospreys, counted* by the Connecticut Audubon Society's volunteers, were seen at more than 510 active nests in 2020, meaning they were occupied by an osprey pair. The 510 active nests resulted in 549 observed fledglings. However, it is estimated that the number of fledglings could have been as high as 744.49

Osprey feed primarily on live fish; consequently, osprey nests are typically located along the Connecticut shore or proximate to water. 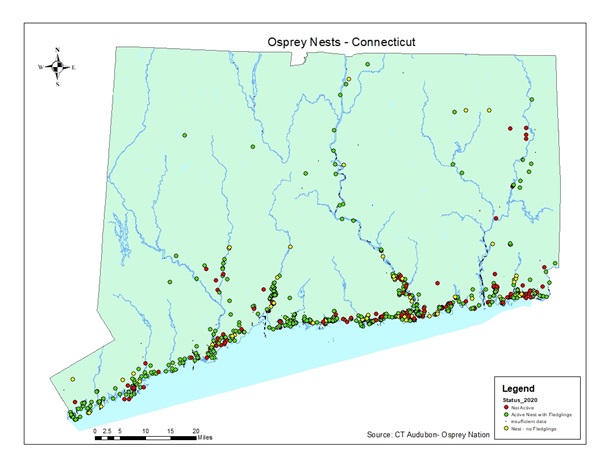 Goal: There is no established goal for ospreys in Connecticut, but ospreys are a “sentinel species,” meaning their health indicates the health of the environment around them. Ospreys are being monitored by the Department of Energy and Environmental Protection (DEEP), the Connecticut Audubon Society, and volunteers.

Technical Note: *Data on fledglings for 2014 was not available.