Forest acreage has generally declined over the last five years. The reduction of core forests is concerning.

Core Forest Acres: Core forests** are essentially forests surrounded by other forests, and in Connecticut, it has been defined as forest features that are relatively far (more than 300 feet) from the forest-nonforest boundary. Core forests provide habitat for many species of wildlife that cannot tolerate significant disturbance. The loss of core forest cover diminishes water purification and habitat values, and could result in heavier runoff, which might lead to poorer water quality and impaired habitat.15

Forests that are fragmented, or divided by roads and clearings, provide some forest functions but are not fully-functioning forest ecosystems. Fragmented forests*** are known to provide substandard or poor habitat for some species of wildlife and, in many cases, less opportunity for hunting and other types of recreation. Invasive species of plants and animals often colonize areas in the wake of activities that result in fragmented forests.

Edge forests comprise the majority of forest type in Connecticut. These are areas that are the boundary between core forest and non-forested land cover features.16 Medium (250-500 acres) and large (>500 acres) core forests have seen the greatest percentage decline since 1985. Perforated forests have seen the greatest percentage increase over that same time period; however, perforated forests only make up about five percent of forest type in Connecticut. Overall, total core forest area has declined by more than 15 percent over the 30 year period (1985-2015). 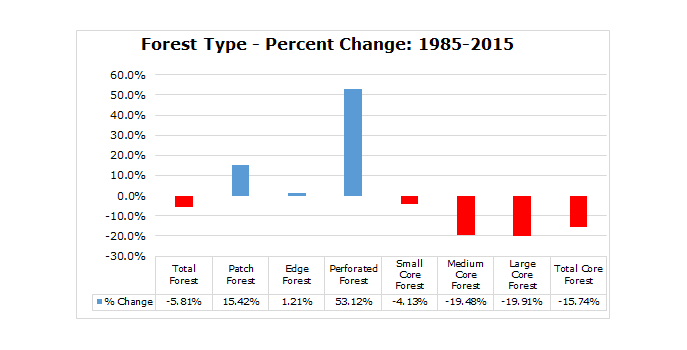 Forests also contribute to climate regulation through carbon sequestration and storage. Carbon sequestration rates and storage vary by stand age, tree species, growing conditions (including soil type, regional climate, topography, and disturbance regimes (natural or silvicultural).17 In the northeastern United States, carbon sequestration rates typically peak when forests are around 30–70 years old, but trees continue to sequester carbon through their entire life span. Approximately 85 percent of Connecticut’s forests are over 61 years of age. Carbon sequestration is also impacted by the type of trees that comprise the forest. Forests comprised of Oak/Hickory and Maple/Beech/Birch groups store a significant amount of carbon per hectare. These forest types combined comprise about 84 percent of Connecticut’s forests.17

*The vertical axis in the “Forest Inventory” chart above has been shortened, beginning at 1,700 (1,000) acres rather than the customary zero. The estimate of forest inventory in Connecticut is derived from the United States Department of Agriculture  (USDA) Forest Inventory and Analysis (FIA) research, which is used to determine the extent, condition, volume, growth, and use of trees on forest land. **Estimates of core forest acres in the chart were derived by the University of Connecticut’s (UConn) Center for Land Use Education and Research (CLEAR), which uses satellite imagery to identify forests that are at least 300 feet from non-forest development, such as roads, buildings and farms. ***Fragmented forests consists of patch forest, which is forest along the edge of an interior gap in a forest that are degraded by "edge effects"; edge forest, which is forest along the exterior perimeter of a forest that are degraded by "edge effects"; and perforated forest, which consists of small isolated fragments of forest that are surrounded by non-forest features and completely degraded by "edge effects".