“Twenty-one per cent of the state's land area shall be held as open space land.”8

In 2020, the Department of Energy and Environmental Protection (DEEP) acquired 1,614 acres of land* under the Recreation and Natural Heritage Trust Program, the primary vehicle for adding land to the State’s system of parks, forests, wildlife areas, water access areas, and other open spaces.9 The State invested almost $2.8 million and leveraged approximately $3.2 million to acquire the 1,614 acres in 2020. 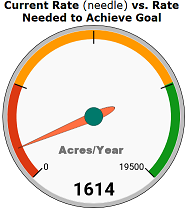 Over the last 10 years, the state has preserved an average of approximately 795 acres per year. While Connecticut has made steady progress to increase the amount of land preserved, State preservation efforts are not on track to reach the State’s preservation goal by 2023, which would require an annual procurement of approximately 19,500** acres over the next three years, as shown in the gauge graphic.


Open space acquisitions provide Connecticut's residents with options for outdoor activities, preservation of scenic beauty, habitat protection and increased biodiversity, water protection and flood control. In addition, forests, farmland and other natural habitats absorb more than 11 percent of the nation’s greenhouse gas (GHG) emissions.10 Land conservation offers a double benefit for the climate: it helps absorb GHG emissions and it prevents significant GHG emissions that would result from development.  Research is also showing that visiting a forest or park has real, quantifiable health benefits, both mental and physical.11

Goal #1: The State shall acquire ten percent of Connecticut’s land for preserved open space. This goal was set in statute in 1997 (Connecticut General Statutes, (CGS) Sec 23-8(b)).

Technical Note: *State land is primarily owned in fee by the State. A notable exception is a 111-acre easement acquired in 2019, which is included in the State acquiaition total. Acquisitions by  "conservation partners" often include easements. **Annual preservation value and gauge corrected 4-29-21.

As Connecticut comprises 3,205,760 acres, fulfilling the goal of 21 percent for open space would require protection of a total of 673,210 acres. DEEP estimates that the amount of land preserved by its conservation partners, including non-profit land conservation organizations, municipalities, and water companies (identified as “Partners’ Preserved Land” in the chart below) exceeds 249,465 acres, about 8 percent of the 11 percent target.

The amount of developed land in Connecticut has increased by approximately 20 percent* between 1990 and 201512 while the state’s population has only grown by approximately 11 percent over that same period. This development pressure underscores the importance of land preservation as a strategy for minimizing and mitigating the impacts of climate change, improving water quality, enhancing habitats, and increasing opportunities for outdoor recreation.

State grants helped municipalities and land trusts acquire or protect 1,174 acres through the Open Space and Watershed Land Acquisition Grant Program in 2020 (depicted on the chart as “Partners’ Preserved Land).

The combined acreage of the state land noted above and the land preserved by DEEP’s conservation partners is estimated by DEEP to exceed 513,038 acres** or 76.2 percent of the state’s conservation goal. The exact acreage is unknown because there is no centralized accounting of privately preserved lands.

Public Act 14-169 required DEEP to "...establish a publicly accessible geographic information map system and database that contains a public use and benefit land registry…” DEEP launched a registry portal as a pilot. To date, DEEP has only added about 26,000 acres or roughly 10 percent of the state-owned open space land into the registry. No progress on the land registry was completed in 2020, nor since September 2018.

Goal #2: Pursuant to CGS 23-8(b), “not less than eleven per cent of the state's land area is held by municipalities, water companies or nonprofit land conservation organizations as open space”.

Technical Note:  *Estimates of developed land based on the University of Connecticut Center for Land Use Education & Research state land cover statistics. **Estimated acres for “Partners’ Preserved Lands” include easements.