Connecticut residents breathed healthful air on 347 days in 2020: an improvement of ten days from the 10-year average (337).

A “good air day” is when every monitoring station in the state records satisfactory air quality. “Satisfactory air quality” is defined here as air that meets the health-based National Ambient Air Quality Standard (NAAQS) for all of the following six pollutants: sulfur dioxide, carbon monoxide, particulate matter (PM2.5 and PM10), nitrogen dioxide, and ground-level ozone.*
The decrease in air pollution is the result, in part, of the air pollution controls that were put in place after the 1971 Clean Air Act. The chart below shows that in the 1980’s, exceedances for sulfur dioxide (SO2) and nitrogen dioxide (NO2) were common. Statewide exceedances of pollutants, except for ozone, are rarely seen, due to federal restrictions on emitters, mostly to Connecticut’s west and southwest. The State continues to suffer from ozone exceedances, and occasionally from small particulate (PM2.5) exceedances (see chart below). Lead (Pb) is not shown.** 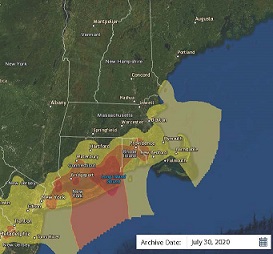 ozone pollution in New England.5 The yellow areas indicate moderate air quality, but it meets the standard for ground-level ozone, while the orange and red areas did not. Some residents in the yellow areas, who are unusually sensitive to pollution, might have been affected. Much of Connecticut's ground-level ozone originates in states to the west. Unless emissions in those states are reduced substantially, Connecticut residents could continue to breathe unhealthful air.

Cities and towns in coastal regions of the state usually see more bad ozone days than inland locations. Coastal towns with monitoring stations that saw the most unhealthful days in 2020, included Madison (12); Stratford (8); Westport and Greenwich (6 each); while the air monitoring stations in Abington (Pomfret), Cornwall, Stafford, and East Hartford (0) saw the fewest.6

No other New England state had more days with unhealthful levels of ozone than Connecticut, which had a total of 17 in 2020. Rhode Island was the next highest with four unhealthful days.7

Goal: While not formally stated, the goal is for Connecticut residents to have a “good air day”, every day.
Technical Note: *The federal air quality standard for ozone was revised prior to the 2016 ozone season. The new standard (0.070 parts per million over eight hours) is slightly more protective of human health than the older standard (0.075). Source of the data represented in the charts is Environmental Protection Agency (EPA) reports that are derived from data received from the Department of Energy and Environmental Protection’s monitors. **Connecticut’s lead levels have been below the national standard (NAAQS) since 1994.